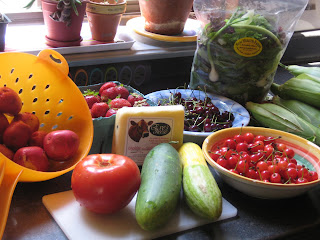 Another good haul from the Farmer’s Market at the Newark Co-op.

OK, so we’re looking at a half dozen ears of corn, sour cherries, sweet cherries, strawberries (good number of these eaten before picture was taken), bag of mixed salad greens, lovely striped yellow-and-green zucchini, quite large cucumber, bunch of potatoes, big ol’ tomato, and hunk of Cheddar with Garlic and Chives.

These were all the same farmers as last week, so I’ll spare you the farm-by-farm. 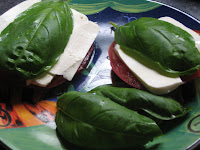 So for appetizers, I cut up the tomato and layered some fresh local mozzarella (bought inside the co-op, didn’t think to include it in the picture) and some basil from the backyard. Normally I would salt the tomato and maybe have a splash of balsamic…

Didn’t bother. It was excellent as is. 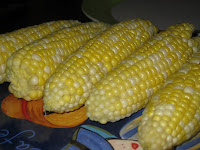 Next up, no-brainer, boiled those ears of corn.

, the best cookbook ever written, and add a tablespoon of sugar to the pot, boiling the ears for six minutes.

Just the best corn I’ve ever eaten… Pretty too. 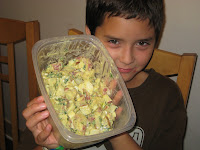 And finally, we have potato salad, complete with homemade mayonnaise. That’s right folks, I actually cooked something. Well, sort of.

The potato salad turned out pretty well, but I’ll never be able to replicate it. Jacob and I were throwing stuff in willy-nilly. Measuring spoons? Recipes? Bah. That’s for boring people. We are guerilla gourmets.

In addition to the homemade mayo (which we were patting each other on the back about, we really were fully prepared for it to be inedible), and the red potatoes, we used a handful of parsley from the garden, the spring onions that were included with our bag of spring greens, local eggs from Lancaster, and a hit of salt, pepper, and mustard powder.

The original plan involved going back out to visit Meadowood Farm, which is a sheep farm five miles away and sells sausages, cuts of lamb, honey (I think they will let you visit the hives) and sheeps-milk cheese. I was going to pick up some meat for my husband to have with dinner. I kind of ran out of steam and figured since he wasn’t part of the challenge he could have some of the steak we had leftover in the fridge…

Turns out I needn’t have worried, we were stuffed anyway. The kids managed to find room for some sweet cherries for dessert, but Jeff and I couldn’t fit another thing. Maybe I’ll go tomorrow and squeeze in a bonus local meal this week- one that involves actual cooking beyond boiling corn and potatoes…

This is what I scored for under twenty bucks at this morning’s farmer’s market! 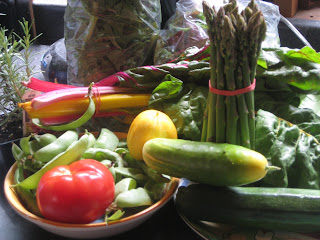 From Sun Health Farm (somewhere in Cecil County, webpage not up yet, somewhere in the vicinity of 50 miles)
Big bag of kale

By 1:00, when I went to make some lunch, it was already pretty hot and humid in my kitchen, and I was not much into the idea of turning on the oven. So the chard will have to wait until tomorrow morning.

Instead, I quickly boiled some asparagus and cooked up an omelette (sadly, with no cheese, because I forgot). Happily chopped up a tomato and tossed on some super-sweet peas. A dash of salt and pepper- Yum! 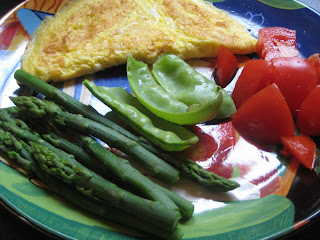 I feel like I’m cheating because so many others participating in the One Local Summer challenge are coming up with creative meals (with recipes to boot!) whereas I am basically just slicing and serving. I may be many things, but a chef I most decidedly am not.

On the other hand, the kids have been eating up the raw veggies! So no complaints here. 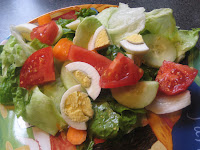 One Local Summer kicked off June 1st and I skipped off to the Farmer’s Market for some local goodies. The challenge, remember: Eat one meal weekly comprised entirely of local ingredients, exceptions being oil, salt & pepper, and spices.

I bought spinach and lettuce, tomatoes and cucumbers, and a half dozen eggs. All local, all organic.

I did not take into account the salad dressing. I hemmed and hawed for a bit, ultimately decided to man up and go without. I added a drizzle of olive oil, a touch of salt and dug in.

Wow! Local tomatoes are really good! I wish I had bought more. Sometimes I like to snack on just a slice of tomato with a bit of salt and pepper.

So, week one, meal one: DONE. Simple, perhaps, but satisfying and delicious nonetheless. I will become more adventurous once wedding season is behind me and I have a bit more free time. I had also glossed over the fact that I am allowed to use spices, so that opens up a lot of new possibilities.

I still have lots of salad ingredients, so I will be eating mostly local lunches for a few more days. But with dressing. I will have to figure out how to make a salad dressing with local ingredients; I am an addict.