April is “Pass On the Gift” month at Heifer International, and I wanted to make sure we got a post in about this inspirational organization before the end of the month.

For those unfamiliar with Heifer, this is a charity that seeks long-term solutions to combat world hunger and poverty. It is a particularly nice charity for children, as it allows them to make a concrete donation in relatively small amounts.

For instance, Maverick decided- after reading about the lines for subsidized bread in Egypt- that he would like to donate three weeks allowance to help feed the hungry. This is a lovely thought, but pretty vague. He wanted to feel like he was really helping someone. Through Heifer International, he and his siblings, who each kicked in one weeks allowance each, were able to donate a starter flock of chicks to a family in need.

Chickens are easy to keep and feed; their eggs are a good source of protein; the eggs can be sold to provide extra revenue. A good hen can lay up to 200 eggs a year. Plus, they’re really cute, and the kids were happy that they were able to give a whole flock. 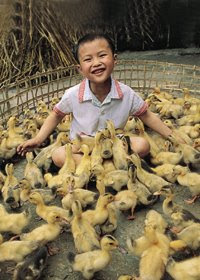 However, for a mere ten dollars they could have donated a “share” of a sheep, goat, or a trio of rabbits. Their twenty could have been a share of a llama or a water buffalo. They discussed the pros and cons of each one- after all, a goat can give milk and will eat anything. A llama provides knitting materials that could be woven and sold. A water buffalo can work your land.

But this is a bird house, so chicks won out in the end.

What I particularly love about Heifer is that part of the contract requires the recipient to “pass it on”; to offer a breeding pair to another family in their village or region. Thus my kids’ twenty dollars (which was matched by Bill Gates!) marches onward to help feed other families. And I like to think about what a wonderful moment that must be, for that family who receives our chicks: to be in a position to give to others.

In addition to the giving of an animal, or flock in this case, Heifer International has other stated initiatives that I think are significant:

So rather than merely delivering food, a temporary (but also necessary) fix, Heifer gets out there, providing families with the means to help themselves and their communities. They teach them the best ways to farm their land, to take care of their animals, to look upon each other as equals. They recognize that ultimately it is the youth of the region that need the most support to meet long-term goals. And they require the “passing on” of the wealth in the form of the animals, as well as the wealth of knowledge, self-reliance, and hope received.

I know everyone is concerned about the economy and the ever-more-ridiculous price of gas. Everyone is keeping an eye on their budget. But we have food on our table and a roof over our heads, and that puts us in a position to pass it on. Even if you don’t have the money or the inclination to support Heifer International specifically, please consider making some small donation to the charity you support, or donating some of your time or talent. Or, like us, tell others about organizations you admire and why. Inspire someone. Make a difference. 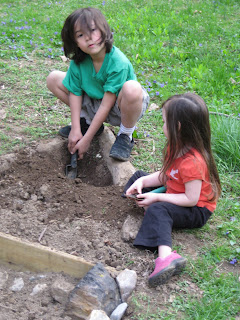 I sent 3 weeks allowance to Heifer International for people to have better food and better lives. I read in the newspaper that some people can’t afford bread. Donating my allowance made me feel good because I’m doing something for someone else.