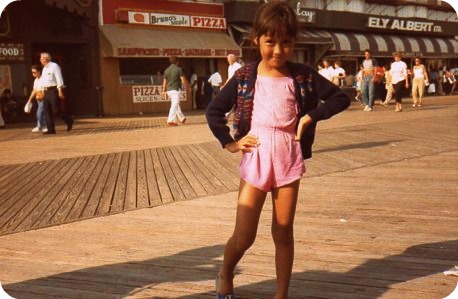 Leftovers in their less visible form are called memories.

Stored in the refrigerator of the mind and the cupboard of the heart.

To take that analogy one step further: memories nourish and sustain the soul (and potentially poison it too, but that’s a different blog post).

When I was young summers were a vast wasteland. I hated summer vacation. The hours and days seemed to last forever. We never really went anywhere or did anything much that I can remember, except for one week in late August, when we rented a room at the Pan-a-Lu in Wildwood NJ.

This week would be marked in red on my calendar, and I would count down the days until I could escape the boring day-to-day of summertime home life, which generally consisted of soap operas, walks to the grocery store (we had no car), rereading Sweet Valley High books, cooking dinner and waiting for the bus bringing my dad home from work.

Wildwood meant the ocean, and shell-collecting, and sand-castle building. It meant feeding french fries to sea gulls and petting rays and sharks. It meant salt-water taffy and cotton candy and Douglass Fudge, trips to the movies and skee-ball at the arcade, early morning bike rides on the boardwalk and “Watch the tram-car, please.”

Summer concerts with Al Alberts singing “On the Way to Cape May,” cheesy souvenir clothing and “things made with shells.” Oh, god, and hermit crabs.

And for one glorious day, it meant a wristband (unlimited rides) at Morey’s Pier.

Last summer, on the last day of the season, the kids and I got to participate in a Blogger’s Day at the Beach, and I took a stroll down memory lane at Morey’s Pier. With my children.

Now, my kids have it way different than I did (glory, in so many ways it’s not even funny). I take them on field trips as often as I can, and my in-laws have a beach house on Long Beach Island that we visit often. But a boardwalk was a new adventure for them, as was an amusement park where 90% of your day is NOT spent waiting in lines.

They had a great time creating new memories, and I spent the day in a weird duality, remembering what it was like to be a child in that space while reveling in my children’s unabashed enjoyment. 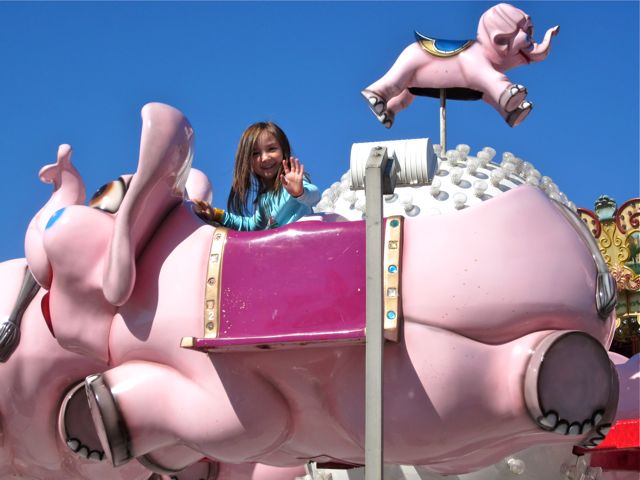 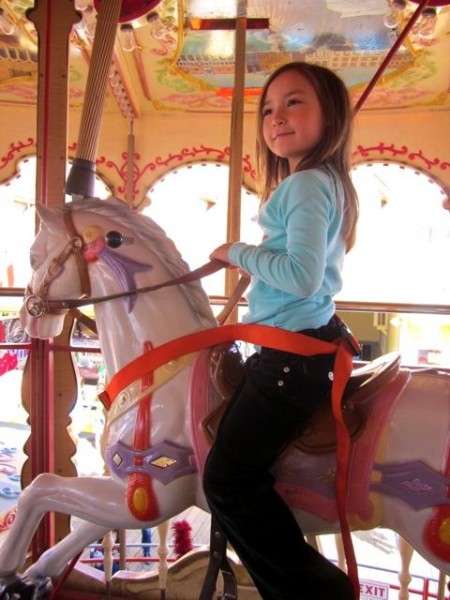 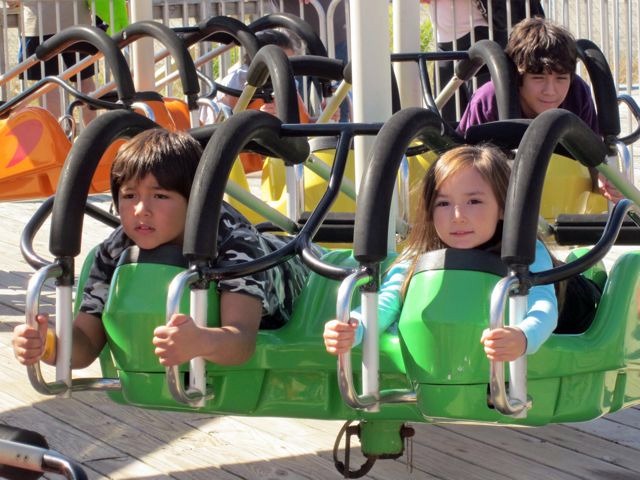 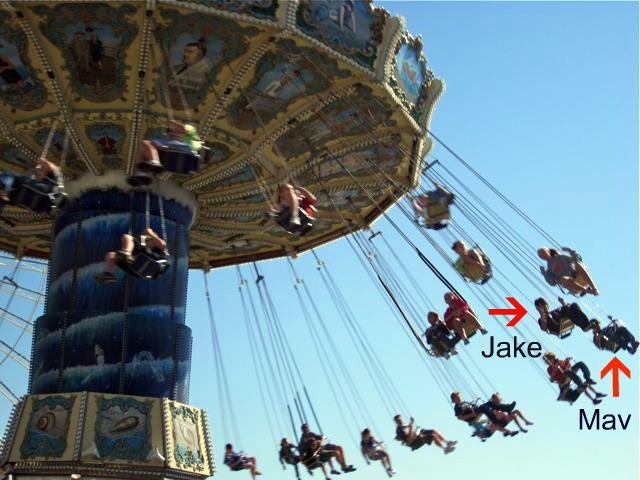 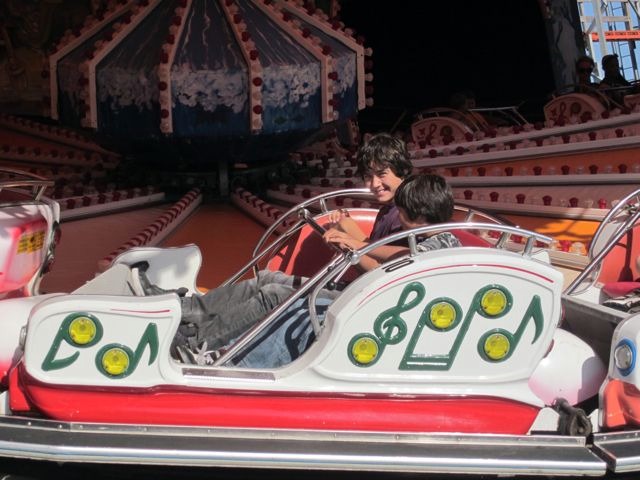 Morey’s Pier Rock and Roll- this used to be one of my faves but man, just makes me sick now 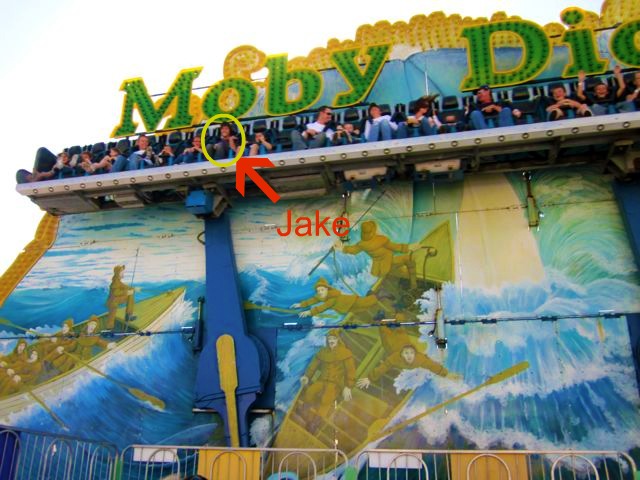 Morey’s Pier Moby Dick. I get sick on these too- new appreciation for my dad, going on all these rides with me 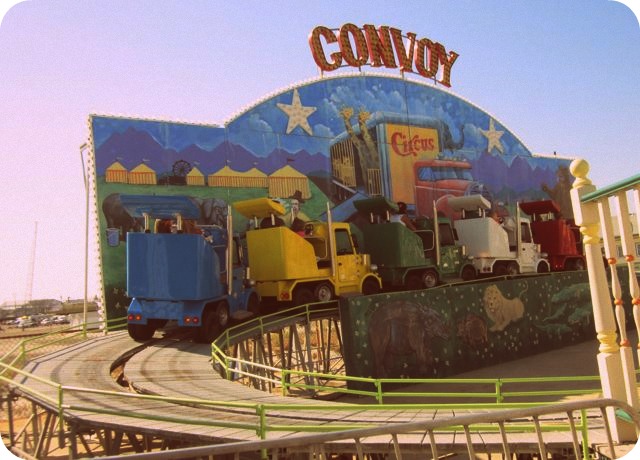 Quick story about the Convoy: once I was waiting for my brother to get off this ride and another (little, maybe 3 or 4yo) kid tripped on the track and busted his face wide open. I know now that face wounds bleed a lot, but at the time I was very severely freaked out and scared and not only did I not go on any more rides for a loooooong time, but I had horrible nightmares about the whole ordeal.

And? I never told anyone about it until I went back to Wildwood and my memory was jogged. It’s a strange relief to put that whole episode in perspective, and to rest.

As a kid I found the FREAKING ENORMOUS Ferris Wheel terrifying. As an adult I still find it somewhat unnerving. 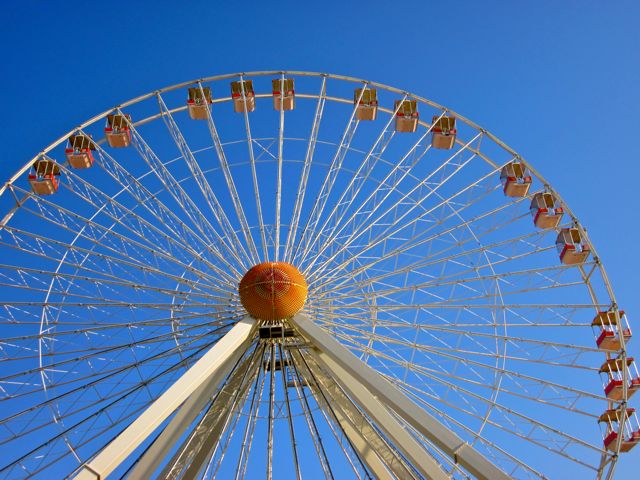 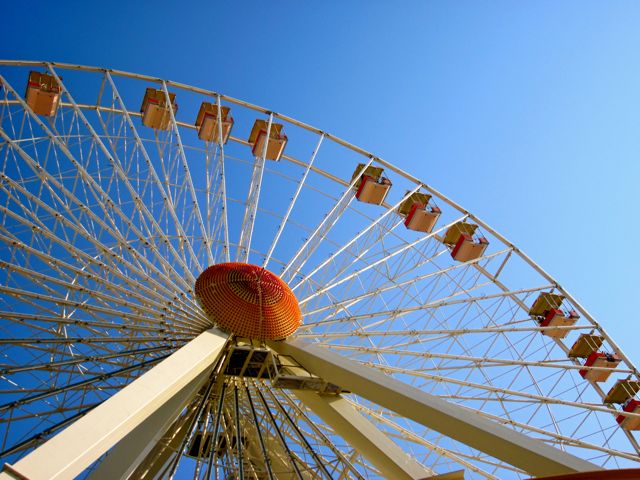 But I felt better seeing that my kids, thrill-seekers that they are, also gripped the sides a bit tightly when the wheel was moving at full steam. It’s REALLY REALLY BIG, ya’ll. 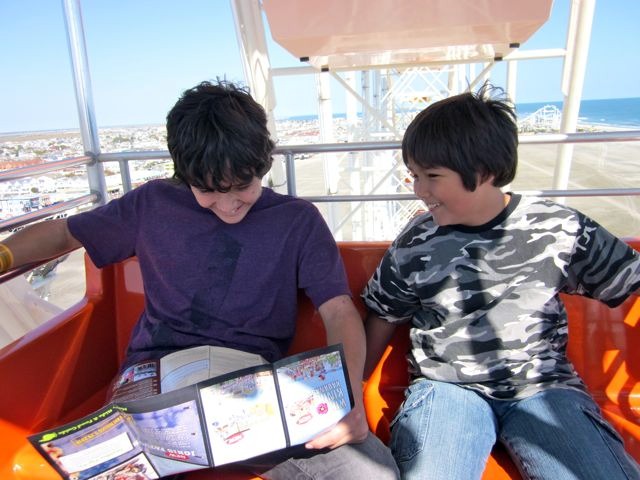 On this trip I also learned that my kids are not natural born drivers. (This was their first time ever manning the bumper car themselves, usually Jeff or I drive. I had to swing past the boys and tell them to hit the gas pedal.) 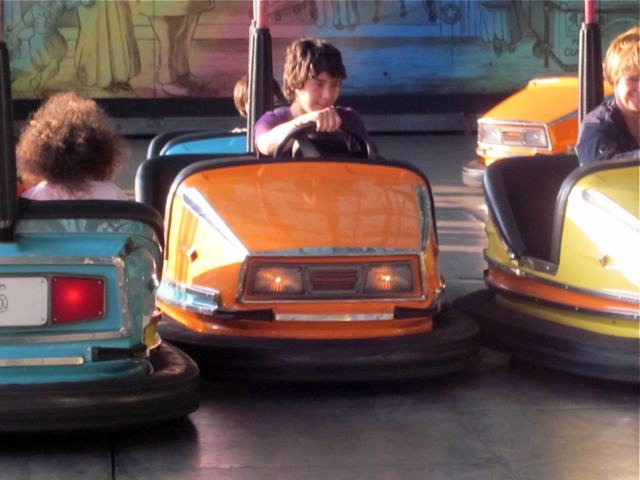 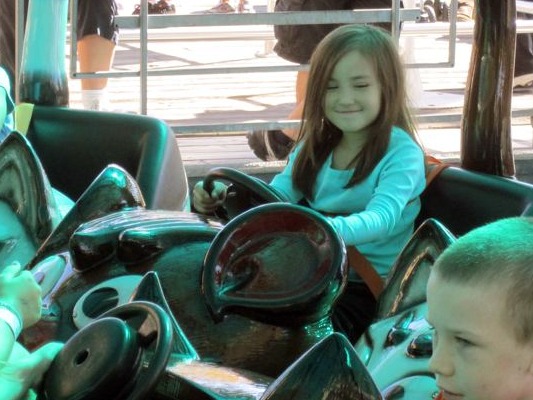 Then we had Jumbo’s pizza and Curley’s fries and that brought me back to childhood more than anything. But only because the tram-car wasn’t running.

As the sun set we got some cotton candy for the road (the fried Oreos, alas, had sold out) and Kohr’s Bros. orange-and-vanilla-twist ice cream cones. Not the most nutritious of days, which I don’t mind a few days a year on occasions such as this. That infrequent extravagence helps contribute to the creation of the memory, the nourishment of the soul.

The kids have already asked if they can go back this summer, and I’m happy to comply, since we didn’t get to the second pier’s worth of rides or to the waterparks. There are also some adults-only “extreme” rides I’m wanting to check out.

Best of all— this is relatively new— you can have “Breakfast in the Sky,” a fancy-shmancy chef-created meal on the Ferris Wheel, complete with white linens and china. I’m not exactly sure why this appeals to me so much BUT IT DOES.

It was so much fun, then and now. I know we all have “our” beach; Wildwood will always be “my” beach even though my summers are now spent elsewhere. But if you’re willing to try out a new beach, a new adventure to stand out in your kids’ memories: give Wildwood a whirl. Up until April 29th you can save up to 35% on the purchase of Morey’s Pier admission tickets.

Where did you vacay as a kid? Do you go to the same place now?

Disclosure time! I attended the Blogger’s Day at the Beach last summer, receiving ride wristbands and snack vouchers for me & the kids, but was under no obligation to blog about it. I obviously really wanted to anyway, but opted to wait until now in the hopes of nudging people to visit this summer.

Because Morey’s Piers are JUST THAT AWESOME.