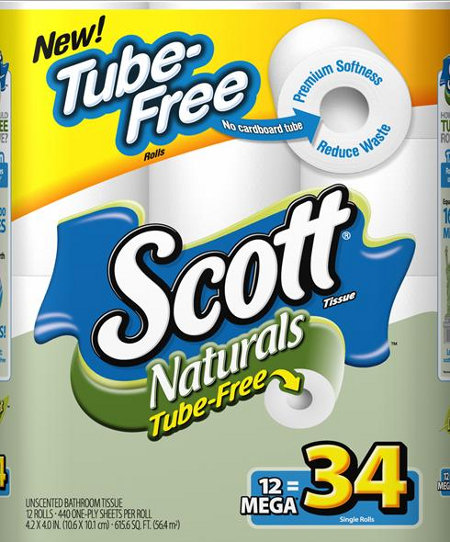 The wrongs done to trees, wrongs of every sort,
are done in the darkness of ignorance and unbelief,

for when the light comes,
the heart of the people is always right.

I heard about this forever ago, but I’ve never seen it “in the wild.” A few days ago we saw a commercial for it at the beach, and no one I was with knew about it, so consider this a post a PSA for the as-yet uninformed 🙂

Way back in October of 2010, Kimberly-Clark announced they’d be releasing a version of their Scott Naturals (40% recycled content) toilet paper that would be rolled without the cardboard tube. And a huge collective gasp came from the green community: huzzah! Brilliant!

Because these are the innovations that make a huge difference. Everybody uses toilet paper. Eliminating the rolls not only conserves the natural and energy resources used to make an estimated 17 billion bath tissue tubes every year (equivalent to 160 million pounds of waste wiping American butts alone), it does so in a way that doesn’t cost any more money and requires no extra effort.

So that maybe people will say, Hey! That wasn’t so hard! And I sort of feel good about it! What else can I do?

I’m also thinking that, if the price is the same, most people will shrug and go with the eco-option for that feel-good feeling. As John Muir says, the instinct of the people is to do the right thing.

Apparently tube-free is being market tested in Wal-Mart and Sam’s Club, which explains why I haven’t seen them in person. I’m not about to make a special trip to buy them, either, but I really hope they do well. The more people buy, the more the price will drop, and the more likely the other brands will see the green light and follow suit.

If you do shop at Wal-Mart or Sam’s Club, there’s a $1 off coupon on the Scott site.

And if you don’t, here’s an easy green step you can take today: recycle those TP rolls with your paper. According to a survey Scott Naturals conducted, more than 85% of people throw them out with the trash, which seems insane.