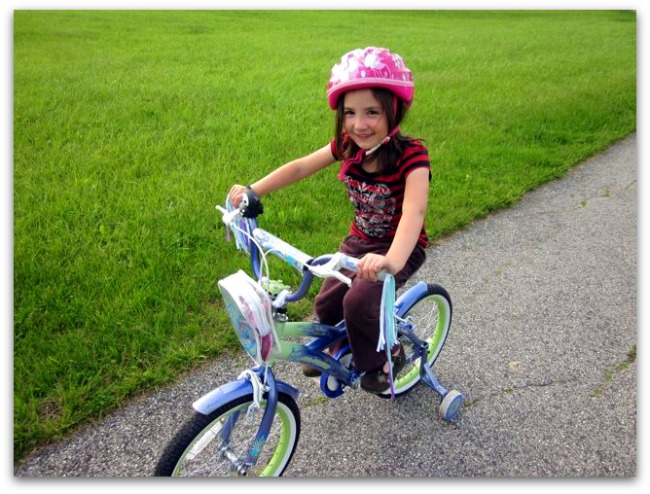 Nothing compares to the simple pleasure of a bike ride.

My kids have all been riding on bikes that are woefully small for them. I don’t know when all this growing keeps taking place, but I wish they’d cut it out, it’s expensive.

Maverick graduated to Jake’s hand-me-down bike, and I’m going to have to get Jake a new one soon; for now he’s content with the skateboard and quick turns on the outgrown bike.

Cass needed something new, so we drove over to Toys R Us. It seemed like a logical place to get a kid’s bicycle.

Sigh. Honestly, I don’t know what I was thinking.

FIRST of all, there are two walls of bikes. Want to guess how they’re divided?

Not little bikes and big bikes.

The choice obvious, unarguable, Cass trotted over to the girls’ bikes. We had already discussed the fact that I would not be buying a Disney Princess bike or a Dora the Explorer bike, but I was really unprepared for the bubble gum explosion.

Every bike on that wall was hot pink or metallic purple and had names like:

Even the brands I had high hopes for (Mongoose, John Deere for christsakes, and Tony Hawk) were HOT PINK.

So I had to decide, was it better to choose a bike that was less overtly girly-girl, or to buy a Tony Hawk bike that’s hot pink? WHY IS TONY HAWK MAKING HOT PINK BIKES?!

We went with Coral Mist, which is purple & green. Cass tries to look tough on it, but it’s sorta hard. Especially when all the helmets were (you guessed it!) pink. 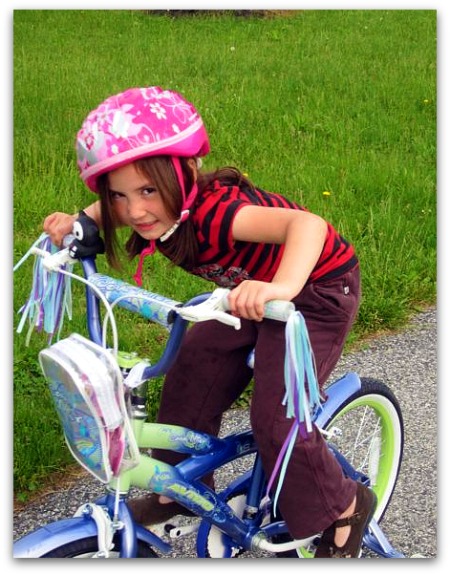 After waiting an interminable amount of time for someone to come help us— i.e., actually grab the bike and pull it down so she could testdrive the thing— we gave up and just pulled the ticket to give the cashier. And then, when I went to checkout, I was given the option of buying a ONE YEAR warranty. That didn’t cover tires. For real? What kind of POS was I buying here?

Look. I realize people think I’m making a big deal of nothing, but I found the whole experience supremely irritating. Why do we have to have gender-specific bicycles? Boys and girls use them in exactly the same way, and for this age group they have the same metal frames, more or less.

(UPDATE: Jeff is informing me that girl bikes are built so that you can ride them wearing a skirt, which is the most inane horse puckey I have ever heard. NO ONE should be riding a bike with a skirt. That is basically saying, girl bikes are built so you can sort of ride them but not really. LOVE that we are continuing to manufacture bicycles according to archaic sexist societal norms. AWESOME.)

(FURTHER UPDATE: Now he is telling me that boys’ bikes are stronger and intended for jumps and tough riding.)

(He has stopped talking now as he becomes aware he’s pissing me off. And that I’m typing what he says.)

I should have checked online first. Then I would have seen this:

Those are your choices.

Not Men. You know why? MEN DON’T BUY BIKES AT TOYS R US. Men buy real bikes, heavy-duty modes of transportation and extreme sport. Not toys.

But yes, Toys R Us carries women’s bikes. A  woman’s bike still qualifies as a toy.

I freaking hate Toys R Us.

Anyway, I’ve been taking the kids to the park to ride; I walk alongside Cass as she wheels down the path. She’s still shaky, and we move at a brisk walking pace at best. If she starts to move faster, she hits the brakes and I bite my tongue.

Right now we’re just building up her leg muscles and her confidence; I don’t want her to get too dependent on the training wheels. But I can’t wait until she has the confidence to fly. It’s difficult to conjure up a more exhilarating feeling.

In fact, seeing her on that bike has me yearning for my own. I’m thinking of signing Jake and me up for the Delaware Bike to the Bay. I did it when I was like 9 years old, so I feel like I should be able to train in time for the late September ride. In any case, you can choose routes that run 17, 45, 75, or 100 miles, so I can always upgrade or downgrade as necessary.

But first Jake and I need bikes. And helmets.

And we’re sure as hell not getting them from Toys R Us.

Are you an adult bike rider? What make is your bike? 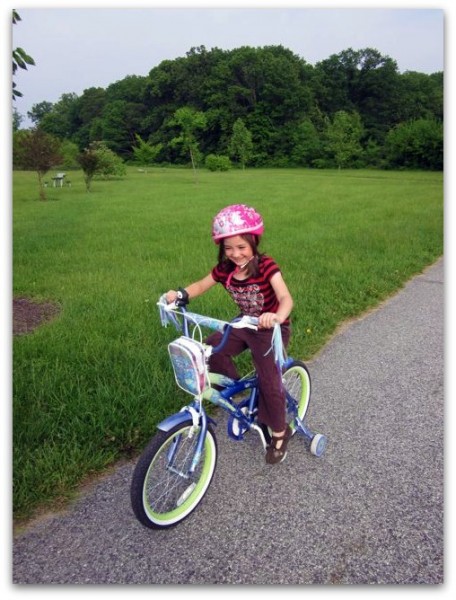