You are here: Home / Food & Recipes / We Made It: Homemade Pop-Tarts 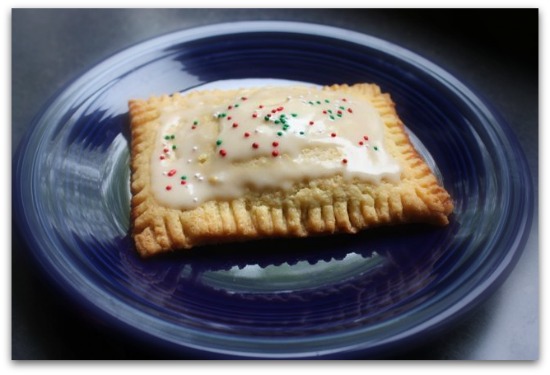 ‘When you wake up in the morning, Pooh,’ said Piglet at last,
‘what’s the first thing you say to yourself?’

‘What’s for breakfast?’ said Pooh. ‘What do you say, Piglet?’

Pop-Tarts are one of those things that the kids and Jeff always circle on the store circular, as though I might absent-mindedly add them to my list and therefore my cart. Personally, I just don’t like them and never have (preferring Toaster Strudels), but they are so not real food. They are basically sugary, doughy coasters with 200+ calories a pop, and I’ll never understand the appeal.

But, the kids like them and I am trying to not win the title of Meanest Mom in the World this year, so we gave the Pop-Tarts the homemade treatment. For our first time out, we tried classic Strawberry with Frosting. Next time we’ll try using Nutella as a filling; or some semi-sweet chocolate chips & marshmallows to make S’Mores; or maybe cinnamon sugar (I think the corresponding Pop-Tart would be Brown Sugar?).

The results were delicious: buttery and satisfying but not sickeningly sweet.

My dough was imperfect, as my rolling skillz leave something to be desired; you would want cold chunks of butter to remain in the dough for a truly light and flaky crust. I overworked it and the butter all incorporated somewhat, but happily the dough and my kids were forgiving: the texture was a fair representation of a true Pop-Tart. And it tasted just fine. 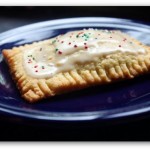 For the jam filling:
3/4 cup (8 ounces) strawberry jam (I went with a no sugar-added organic)
1 tablespoon water
1 tablespoon cornstarch

— First make your filling by mixing the cornstarch and water together and adding to the jam. Bring to boil in a small saucepan, simmer for two minutes, then allow to cool.

— In mixer fitted with the paddle attachment, combine the flour, sugar, and salt at low speed. Chip off  bits of butter (like 1/2 Tbsp chunks) and add until the mixture holds together, with good-sized lumps of butter still visible.

–Whisk together one egg and the milk, and add it to the dough, mixing only until combined. Remember, you want to retain those lumps of butter for flakiness.

–Divide dough in half; (the King Arthur recipe helpfully notes that each half will weigh about 10 ounces). On a lightly floured surface, roll each half into approximately a 9″ x 12″ rectangle, 1/8″ thick (use a 9 x 13 pan as a guide).

–Lightly score lines onto the dough to mark thirds lengthwise and widthwise (so you have nine 3″x4″ squares). I used a ravioli cutter to mark my lines; King Arthur suggests lightly leaning a ruler into the dough. Beat egg and brush onto pastry.

–Spoon a dallop of jam filling into the middle of each square.

–Place the second sheet of dough over top and seal firmly around each filling mound by pressing with fingertips. Cut between mounds to make 9 pop-tarts (ravioli cutter rocks the awesome here). Press the edges shut, then press again with the tines of a fork. Prick the tops twice with the fork so steam can be released. Transfer to parchment lined cookie sheet and refrigerate. Preheat oven to 350°.

–Bake 25-30 minutes or until golden brown. Allow to cool; meanwhile mix together your confectioner’s sugar, milk and corn syrup for the frosting (I added a bit more milk for a thinner consistency). Ice, add sprinkles or nonpareils if ya got ’em, enjoy! 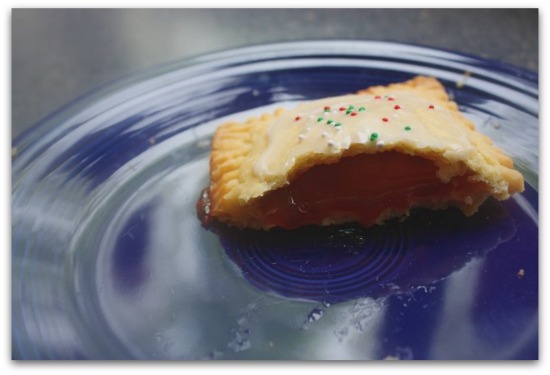 Part of a new series where I make homemade versions of mass-produced treats. 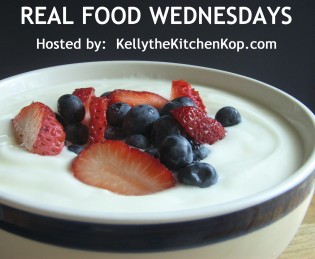 Check it: I’ve added this post to the Real Food Wednesdays linky at Kelly the Kitchen Kop. You know you want to see what else is posted because that blog name is made of awesome.