You are here: Home / Family, Parenting / We Ate It: Horned Melon 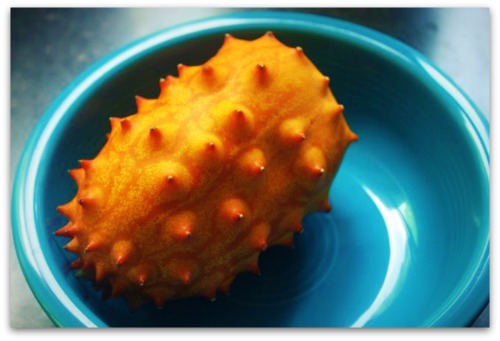 The way grocery shopping works in our house is, one kid shops with me each week. They trade off whose turn it is, and the kid who is with me gets to choose what fruits, juices, cereals, etc we buy for the week (from a set of options I give them).

Last week was Maverick’s turn, and he opted for the horned melon (aka kiwano).

First off, these things are pretty seriously spiny, as in be careful picking them up. This set off alarm bells in my brain; doesn’t nature generally make poisonous things armored and/or technicolored so people won’t be tempted to eat them? I suspected the thing would be sour and awful but “life is a daring adventure, or nothing,” and certainly I love Maverick’s sense of adventure when it comes to trying new foods. 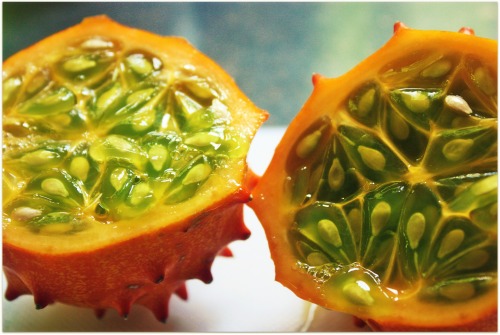 Sliced open, the horned fruit is a whole bunch of seeds individually encased in pouches of clearish jelly. You don’t eat the seeds, just sort of suck off the sticky flesh.

The taste is reminiscent of cucumber, a little lemony as well, and the texture of the jelly capsule is similar to the inside of a grape. It’s slimy as all get out and will turn your kitchen floor into a skating rink if you spill any.

I have to allow for the fact that I have no idea whether this was a properly ripened kiwano, but I don’t think I’ll be adding the horned melon onto our weekly list. It was pretty gross.

I can see this as a fun experiment for kids of a certain age who are into gross things. There are a lot of fun textures to work with here and it’s a non-toxic goop that would keep kids occupied on a summer’s afternoon. I’d say the seeds would be particularly fun loaded up into straws and shot, blowdart style, at a target— I’m pretty confident they would stick.

In any case, I heartily recommend spontaneous buys in the produce department as an antidote for picky eating. Framing these expeditions into new foodie territory as an adventure has really encouraged my kids to try new things. Not every experiment has been successful, to be sure, but that hasn’t been a big deal.

I had worried in the beginning that setbacks would cause my kids to be more unwillingly to taste something new; in fact the opposite has been true. Their willingness has expanded since they’re aware they’re not obligated to love each new thing.