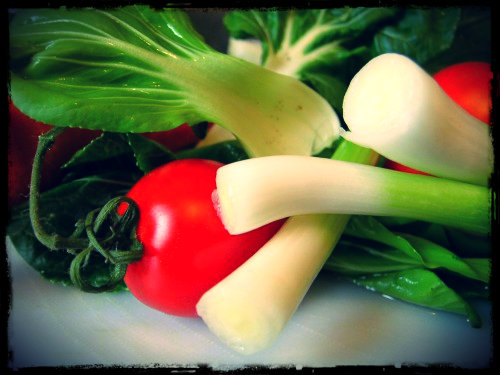 The colors of a fresh garden salad are so extraordinary,

Once a week for three weeks, researchers from Penn State snuck puréed veggies into the lunches of 40 preschoolers.

The kids ate the same amount by weight regardless of veggie content, doubling their veg intake and reducing their calories by 11%.

70% rated the veggie-enhanced meals as OK or yummy, when asked.

So, obviously the takeaway is that kids will eat veggies and not hate them, but before you run out and buy your copy of Deceptively Delicious

or The Sneaky Chef

I want to throw my two cents in…

I hate the whole idea of vegetable deception.

This stems partially from the fact that my mom was constantly telling me things were chicken and then cackling that I’d eaten mussels or whatever (meaning I had a very night ahead of me, as I can’t stomach shellfish).

But it also just strikes me as doing our kids an injustice. Vegetables are good, y’all. They’re tasty. They’re visually satisfying. They come in their own all-natural packaging. Most require only minimal prep.

But they’re an acquired taste, meaning that a person has to try them at least ten times before they get used to the flavor, and probably more before they enjoy and crave it.

If you’re smothering that taste in something else until it becomes imperceptible, kids aren’t getting those initial flavor trials in. And if they don’t try them now, while they’re young and impressionable and eager to please… the likelihood of them ever trying on their own just dive off a cliff.

It doesn’t matter if you double your kid’s broccoli intake now if he’s never gonna try broccoli later. Will you be sneaking veggies into his pasta sauce when he’s a teen? What happens when he’s making his own meals? Will he even know how to make those veggies palatable on his own?

No, this is playing the short game; taking the easy way out.

I’m not gonna lie, it’s an ongoing battle at our house, too. Here’s a few tips I’ve picked up over the years…

It tastes better, for one, but kids are more likely to appreciate and try the veggies they’re cared for with their own two hands.

Buy your own— at farmer’s markets.

There’s a larger selection, and again, kids are more likely to appreciate and try the veggies they have a relationship with (“these came from the nice lady with the black lab”). I’ve also found that the farmers at my market are nice enough to offer samples my kids can’t refuse, and they suggest ways to cook things that I’m unfamiliar with. The kids are usually pretty open to these suggestions (more so than the things I come up with on my own). Take your kids to the market, ask for recipe tips, make sure the kids see and hear.

Choose your own– at the grocery store.

My kids trade off whose turn it is to go to the grocery store, and whoever the (ahem) winner is that week gets to choose stuff like the cereal for the week and the produce we buy. Maverick likes to pick out the weird stuff we’ve never tried, like horned melon. To be honest I was the one who balked at eating that one 🙂 The kids couldn’t wait to cut into the exotic fruit.

Get the kids cooking.

I think kids should start cooking at as early an age as possible. It instills a knowledge of how much work goes into your preparation of a meal on a nightly basis, which means they’re less likely to arbitrarily turn up their nose at whatever is served. But they’ll also eat a few bites of a dish they’ve prepared themselves.

Let the kids pick out a recipe to try. Sometimes they’ll be successes… and sometimes they won’t. This is such a great teaching moment that you totally lose with the vegetable deception. Try it, maybe you’ll like it. Maybe you won’t. Maybe it will be just awful. It’s not the end of the world.

Learn from the experience, cut your losses (although I always choke down a few bites for the sake of being polite, another good lesson to model), and move on. One of the most important lessons you can ever teach your children, really— don’t let the possibility of failure affect your willingness to take a risk. That’s what life is all about.

Kids have more sensitive smell receptors than we do, and cooking veggies enhances their scent, which is why some kids will actually gag when you try to get some wilty broccoli into their mouths. (Sorry to keep picking on you, broccoli.) If this is the case with your child, try raw veggies and whatever dip they like. I ate veggies dipped in ketchup for years, a fact that my parents hated but tolerated because I ate TONS of greens that way.

Croutons are yummy. I dole them out like desserts. One crouton per x pieces of salad. It’s silly but it works.

Watch your face. And your tone.

Your kids are. Don’t expect them to eat something you’re not visibly enjoying yourself. And if your husband says things like, “I’m not touching those brussel sprouts with a ten-foot pole,” make him stop. Dads strongly influence kid eating habits, so can the dadittude.

Other than that, it’s just perseverance… and practice. I know this is an unpopular thing to say, but being a good cook helps. If that’s not your strong point, keep trying, I swear it gets easier. Just always keep some raw veg on hand… just in case.

My two cents just ran about a thousand words. What else is new?

How do you get your kids to eat the good stuff?