Let’s talk about sustainable weight loss, getting your nutrition on point and vegan protein powder to support your goals. OK? 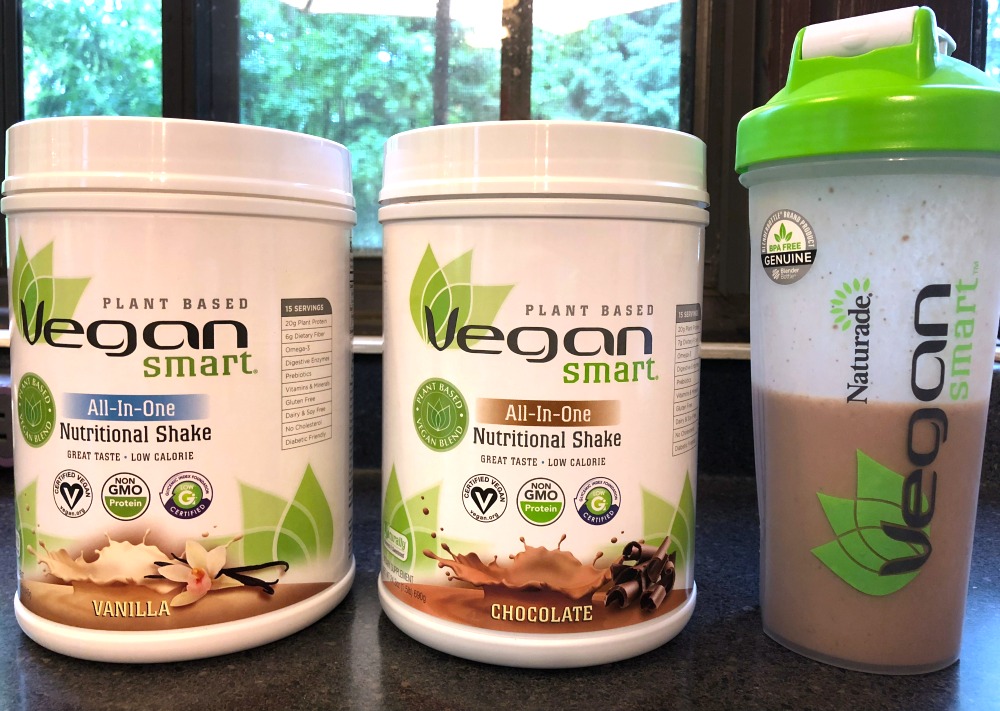 (That feels like a quote that someone else probably said first—scratch that, probably tons of people have said it, but they weren’t Oprah, so there you go.)

Confession: I’ve been struggling with my weight lately.

Long story short, I put on some weight after Cass was born, then lost it alllll when I started running. Then I started CrossFit and the number on the scale crept back up again, but I legitimately didn’t care because the weight was distributed differently; I was mostly muscle. I was strong.

And then I stopped going to CrossFit, and the muscle turned to fat with some extra sympathy fat joining in for company. I’ve started again with a home gym, but it’s so much harder this time around. I don’t have a coach busting my chops when I’m slacking, for one, but also I’m older and more tired and research shows it’s harder to exercise off the pounds after you’ve done it once.

The good news is, I have done it and so I know deep down how to do it again. It’s just going to take longer for sustainable results because I’m hormonally, metabolically and physically different then I was at my last starting point. And that’s OK, because slow and steady means it’s more likely to stick longterm (or, rather, the weight is more likely to stay unstuck).

In my years writing extensively for a fitness-centric agency, I learned a LOT about weight loss and of course I also saw how that bore out with my own experience. So for those also going through this, here are my common sense Cliff’s notes.

The holy trinity of weight loss is nutrition, energy expenditure and sleep.

You gotta have all three, and lots of it, and the right kind. I talk about the benefits of sleep in this post, and I’ll get to energy expenditure in my next one. We’re talking nutrition broadly in this post.

My diet was not terrible, but it wasn’t great either. I don’t eat a lot of junk food, I don’t have a sweet tooth, I’m not much of a snacker, I don’t stress eat or emotionally eat, the vast majority of what I eat is “real food” that I prepare myself. It felt like what I should be doing is just jumping in with both feet with exercise, but I know from last time that’s not the answer. Here’s what I’m doing instead.

Tips to tighten up your nutrition

If you’re really making the effort to eat more plant based foods, or if you’re already a vegetarian or vegan anyway, hitting your protein goals can take a little more planning. I’m a big fan of protein shakes— they’re one of my few regular choices that don’t fall under the “real food” umbrella— because I hate eating breakfast, and I’m never hungry after workouts. But I also have a bit of a lactose intolerance (that’s probably a contributing factor in those vitamins I’m chronically deficient in), and sometimes whey proteins can really put a damper on my day via my stomach.

Now, I’ve had the opportunity to try out a lot of different protein powders in the last five years or so. I would say they are, in general, an acquired taste; since I grew up drinking them (I was chronically underweight as a child) I kind of like it. There are a few that do taste great on the first go but they generally have a trade-off in terms of sugar content (or sugar substitutes, some of which I also have tolerance issues with).

I’ve tried a couple of plant based protein powders before but I wasn’t a fan. I won’t name any names, but no matter the flavor they all tasted… earthy. Like literally very mineral/dirt like.

I’ve never had a plant based protein powder that I really enjoyed. Until now. Really.

I tried VeganSmart All-In-One Nutritional Shakes through the MomsMeet blogger program and I’ve been having a shake for breakfast on weekdays (weekends are for brunch) for a few weeks now, made with either almond or soy milk. I usually also try to choke down a  small banana, even though I hate bananas, because I have a tendency to get leg and foot cramps when I run (as in, when I’m running somewhat regularly, not during the actual exercising) which some studies attribute to possible potassium deficiency, and I figure a banana a day certainly can’t hurt.

None of that matters unless it tastes good, and this definitely ranks up there on my top five. I like the vanilla better than the chocolate, but the chocolate is equal to the taste of most chocolate whey proteins out there. Like I said, I’ve been voluntarily drinking these 5x a week, and I plan to continue to do so until I hit some weight and fitness goals. It hits a lot of goalposts for me: I’m eating breakfast without fuss, I’m supplementing my nutrition gaps, especially those normal people would get from dairy, and I’m getting a protein boost to rebuild those muscles. More on that in my next post.

A 15-serving jug of VeganSmart All-In-One Nutritional Shake typically retails for $36.99. It comes in Vanilla, Chocolate, Wild Berries, Chai, Peaches and Cream, Raspberry Chocolate, Strawberry Shortcake and Cookies and Cream. You can find it a lots of different places, including Walmart, Walgreens, The Vitamin Shoppe, Albertsons, and CVS. (Full list here.)

Save $7.50 on VeganSmart with a printable coupon redeemable at your local brick and mortar retailer here: https://www.vegansmart.com/momsmeet.

These organic gummy vitamins for kids (and adults!) are vegetarian, allergen free, gluten free, and delicious. 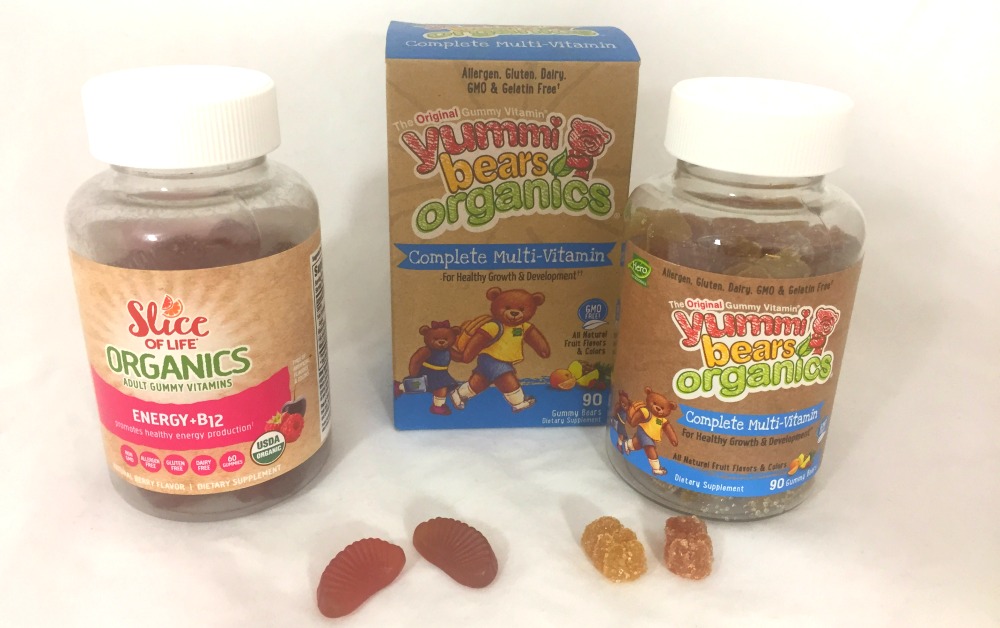 The first wealth is health.

Mine is pretty good, I think. I try to eat my fair share of fruits and veggies; I’m especially conscientious because I’ve cut out the majority of dairy due to intolerance. Dark greens like broccoli, spinach and kale have a decent amount of calcium, but the daily recommendation is 1000mg and you do have to rabbit up a fairly sizable serving of veggies to hit that on a daily basis. Sometimes I do so easily. Sometimes the day is a whirlwind and when all is said and done, I might not have had a green all day.

I imagine it’s the same for all of us, and particularly our kids. We do our best, but some days are better than others. Vitamins and other supplements are a good way to feel confident that we are filling those day-to-day nutritional gaps, to keep our energy levels high and our bodies healthy.

Through the Moms Meet blogger program, I was sent two different kinds of gummy vitamins from Hero Nutritionals to try: Yummi Bear Organics Complete Multi-Vitamin and Slice of Life Organics Energy + B12. These are the supplements I already take (a gummy multi and a gummy B12). Up to this point, I hadn’t pledged allegiance to any one brand; often I pick them up from Costco but I’ll try other brands if they’re on sale.

I think I may have found *the* brand.

The most important factor, for us, is the flavor. It’s no use buying vitamins the kids and hubs aren’t going to take, right? These taste awesome. The B12s are without question the best tasting ones I’ve ever tried. The Yummi Bear multis are like low-key candy; the kids take them without having to be reminded. Delicious.

Although I’m not currently a vegetarian, I have been in the past and Cass seems to be leaning that way lately, and I remember it being a pain finding vegetarian gummy vitamins. So the next thing that jumped out at me is that these vitamins are made from fruit pectin, not gelatin, which is great.

Let’s go through the rest of the reasons why Yummi Bear Organics multis and Slice of Life Organics Energy + B12 are smart supplement choices. 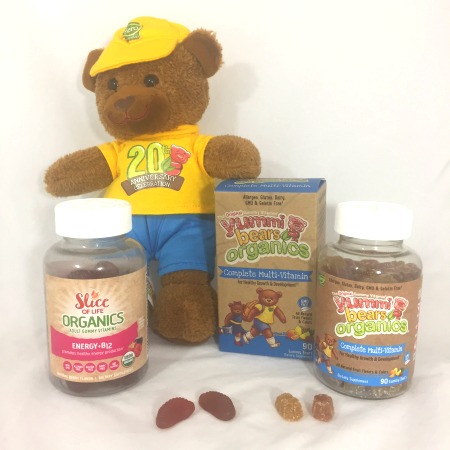 Slice of Life Organics Energy + B12

As I said, I don’t eat much dairy anymore, and I’ve been cutting back on meat pretty hard as well. These are your major sources of B12, along with fish and clams (which I consider meat anyway but I know not everyone does). Add that to letting go of caffeine, and I get brain fog sometimes. Taking B12 definitely makes a difference with that.

In addition, my husband has ulcerative colitis, and often people with digestive issues like his (Crohns, celiac disease included) have trouble absorbing B12 from food. I can’t say he takes B12s for that reason; it’s more that when he sees me eating gummies he wants some too. But hey, it works, right?

Taking a B12 supplement that includes folic acid and B6 can help to give your heart and circulatory health a boost, along with improving energy metabolism. Unlike some supplements, B12 is considered to be safe to take— just stick with the noted dose, in this case two “slices” per day.

Not all vitamins and minerals are considered to be non-toxic in high doses, though, and some can interfere with the efficacy of medication you might be taking. Generally speaking, it’s highly recommended to see your doctor for well-visits regularly and mention any symptoms that are prompting you to consider a new supplement. They’ll likely send you for a blood test to uncover any deficiencies and help you determine what supplements to take at what doses.

Where to get ’em

The really nice thing here is that Hero Nutritionals are pretty readily available. You can find them at Whole Foods, Sprouts, Ralphs, Kroger, Smart & Final, GNC, Vitamin Shoppe and Jimbo’s, as well as online at Amazon and at costco.com. Check out the full list of locations here.

When someone asks me what kind of eater I am, I usually say “conscious.” I spent years defining myself as a vegetarian, only to obsess over an unattainable hamburger and then fall completely off the plant-based bandwagon when I couldn’t deny myself any longer.

Last year, I finally stopped seeing the food world in black and white and realized that I was happier eating greens, beans and tofu most of the month, with the occasional serving of organic steak or wild-caught salmon once every 30-to-60 days—minus the guilt.

It’s been truly liberating—although it’s also been a challenge to cook for my three kids, who were used to chicken or beef on a thrice-weekly basis. I still cook meat for them about once a week, but I also offer a veggie main course: They eat mostly meat and a little tofu; my husband and I stick to the tofu and skip the meat. It works out.

Vegan, vegetarian, pescatarian, carnivore, omnivore. We have a label for every type of eating preference these days. But it seems to me that sometimes we spend more time thinking about the label than the decision-making process behind it.

Last week’s release of the Environmental Working Group’s new “Meat Eaters Guide to Climate Change and Health,” showed how important it is to look at the physical—on ourselves, and our planet—repercussions of eating meat. Especially for parents, the guide is an eye opener.

Find out more at HealthyChild.org.