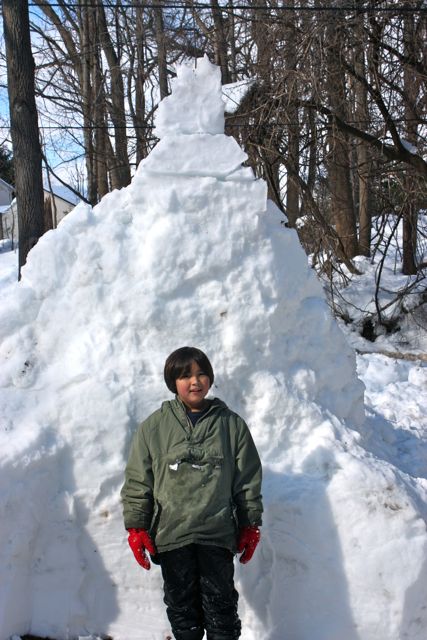 Sunshine is delicious, rain is refreshing,

wind braces us up, snow is exhilarating;

there is really no such thing as bad weather,

only different kinds of good weather.

This snowfall was nothing like the double blizzard we got last year, of course; that time the stars aligned to bring us the perfect storm. This year the stars talked it over and decided to pick on the New York area, and we’ve received pretty much the perfect amount of snow here in the Mid-Atlantic: enough to sled easily on, but not so much that it made shoveling a body-punishing sacrifice or driving a treacherous choice.

Last year, shoveling out the driveway and a path to our house seemed like- no, WAS- a Herculean task- where in jeebus were we going to put all the snow?

Honestly, I don’t know what other people did. We, naturally enough, constructed a steep kamikaze snow ramp of death, complete with jump, named The Terminator. (And by we I mean Jeffrey. As I grow older I am more and more content to watch the shenanigans from the kitchen window and wave.)

Over the years we’ve accumulated quite the sled collection, mostly as gifts. Since the kids rode these sleds down The Terminator no less than 30 bajillion times last year (that snow ramp lasted until at least Easter), I now consider myself an expert and thought I’d share the best and the worst.

This one seemed like a fun idea when I saw it in the catalog. It’s like a hard hat for your butt.  No sled to carry back up the hill! Just strap it onto your derriere and you’re good to go! Only, it’s a huge pain to strap on, and it doesn’t like to stay strapped on. And snow tends to pile up between your butt and the plastic. And your feet get in the way. 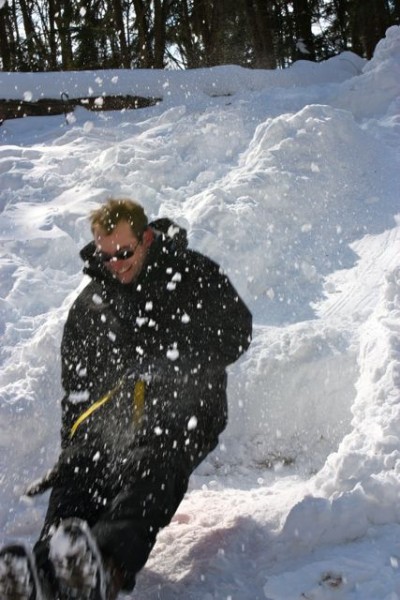 And, you’re hardwired to want to have somewhere to put your hands when you go hurtling down an icy hill. So in this case you instinctively hold onto your private bits (what my kids call your “tenders”). Good for photos (which I did spare them), not so good for your hands. Lots of skinned wrists.

Verdict: so not worth the money, not even as a gag gift. A waste of plastic and I regret falling for it, so I’m not bothering to find a link for purchase. It appears they changed the design so now it’s a pair of shorts with a butt sled built-in, which seems even more likely to fail. 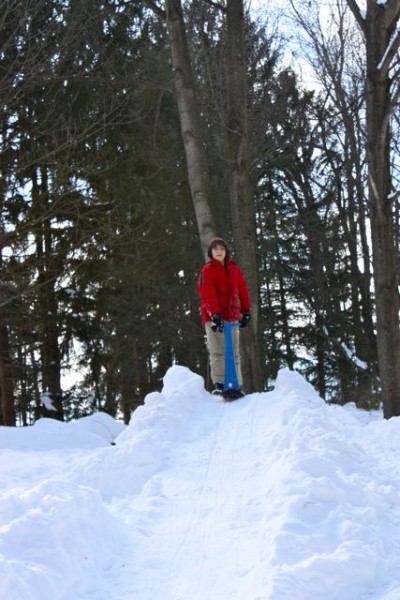 So, this is basically a snowboard for beginners. You solve the kid problem of “where do I put my hands.” It’s pretty durable- I assumed the handle would snap off after some use but it’s still all in one piece. The handle folds down for easy storage.

The footprint is pretty small, so it’s clearly meant for younger kids. However, my younger kids were all inclined to sort of lean forward and put their weight on the handle, which made the nose dig into the snow. So as a learning tool for future snowboarders it kind of sucks. Jake, who has snowboarded before, was able to balance just fine but his feet would hang off the edge and get in the way. 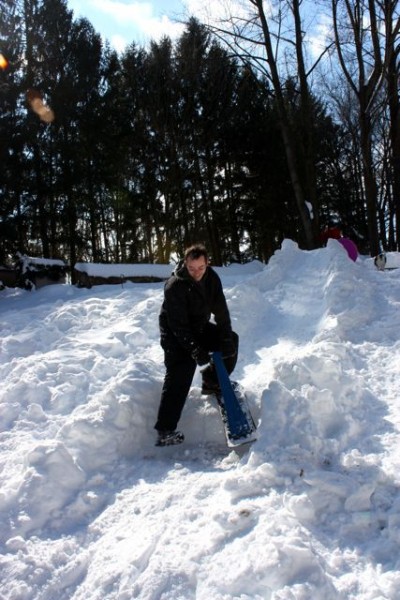 Verdict: good for kids who have maybe gone snowboarding before and are under a size 7 shoe. Works much better on packed, icy snow. Doesn’t do jumps at all. Feels flimsy but holds up well. Scores cool points with younger tweens. 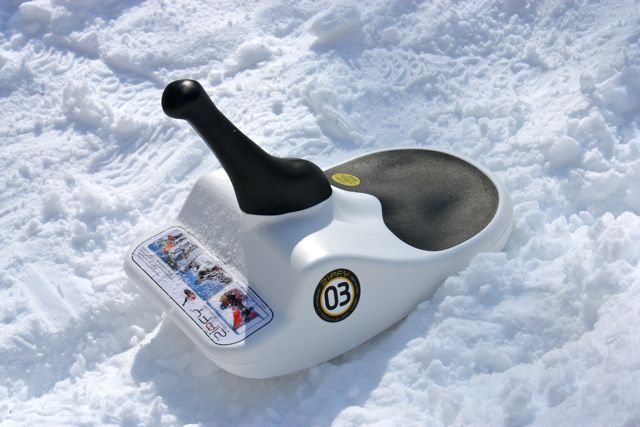 Last year, we were ready to count this one out. It wasn’t as fast as some of our other sleds and was deemed a “gonad smasher.” It didn’t handle the jump well- you couldn’t keep from tipping backwards from your weight- so you were pretty much guaranteed to be flung off when you hit the ground again.

But, with the 6 inches we got this time around, a wet and heavy snow (which is what we usually get, as storms tend to change over into the dreaded “wintry mix”), you can launch this sled off the top of our hill and ride all the way down, especially since you can guide the steering around trouble spots. 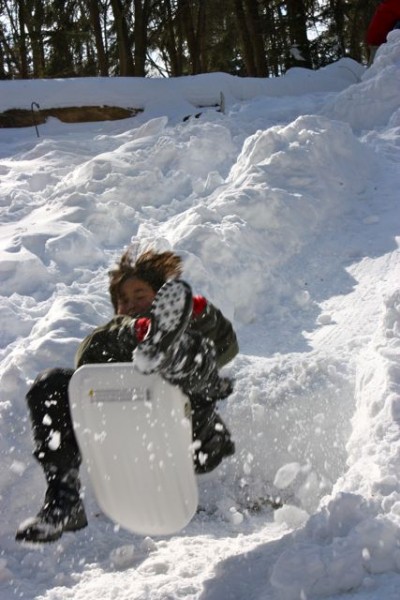 Verdict: Pretty good for normal snow use (i.e. not hard-packed formed ramps and jumps). Kids have a place to put their hands, can steer around obstacles, and stop themselves easily before they hit the creek by just putting their feet down. Goes pretty fast and of course looks like something the ski patrol would drive. Still a potential gonad smasher if you hit something in the snow. 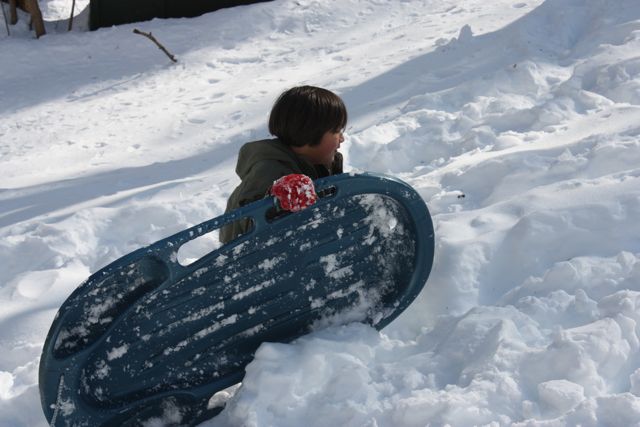 This is what I think of when I think sled, so I thought it would be a clear winner. Not so. While it cruises on the hard-pack, especially if it has an icy top layer, it SUCKS in deep soft snow. Basically your weight just sinks it into the snow and you’re beached.

We also started out the season with 3 of these and ended with just one. They don’t take life’s hard bumps well. 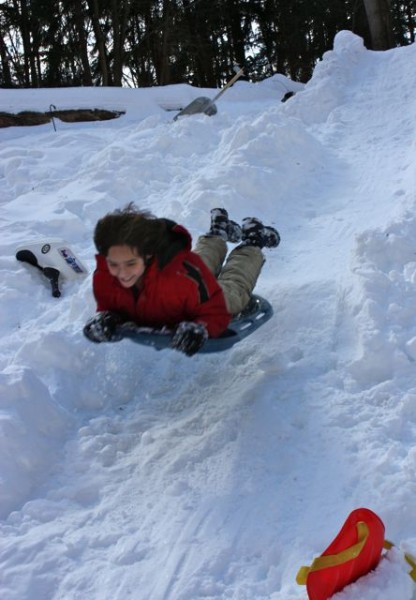 On the hard pack, though? We’re talking big air with a single rider.

Verdict: For packed snow only, soft snow is like quicksand. Since you want to either lay on your belly, like Jake is, or leaning back, this sled can be killer on your neck as you crane to see or come to a quick stop. Not much steering control to speak of. But, this was the sled 5yo Cass was most comfortable with, as she could really grip onto the handholds and had a place to brace her feet. This sled did triple-duty: I pulled Cass to the bus stop in it (otherwise she was constantly falling and getting all snowy before school), and I used it to take the groceries from the car to the kitchen in one trip.

I think if I were going to buy another one I’d go with a longer version, since the big appeal with this sled is multiple riders. The Pelican Mega Snow Glider with Leash is $26 and seats three; I think you can find a regular two-seater at any Toys R Us for maybe 15 bucks. 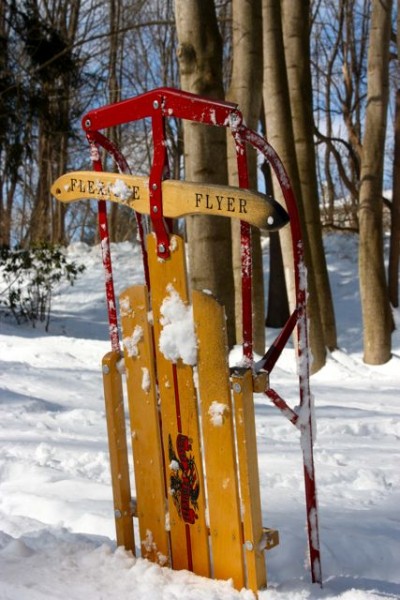 I had one of these as a kid. Bonus points for nostalgia, plus this thing really gets going on the icy snow! 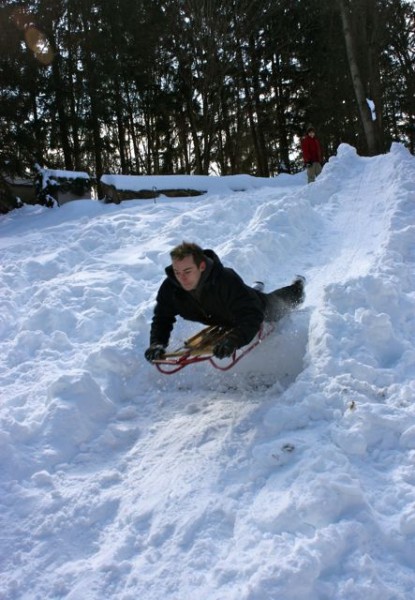 Verdict: it handled the jump OK, although it didn’t get big air. You also have more steering capability. Downsides: expensive, and heavy to lug up a snowy hill. Not awesome in really deep snow that’s not iced over a bit, as the runners will sink under your weight. Big winner for retro style, though.

Santa brought each of the kids one of these, but I have it on good authority that they were purchased at a mere $4.99 apiece at Target. (We used to have two hard plastic circle sleds too, that I bought at a yard sale, but they both broke before the end of the season, so no recommendation there.) Each sled came with several of those patches that you get with any inflatable, which I immediately put into a VERY SAFE place, aka the junk drawer, but we haven’t had to use them yet.

Verdict: Smaller kids feel safer with somewhere to put their feet and handles to grab on to, and it’s easy to stop by swinging your feet down. The cushioning of air helps minimize the whiplash effect (worth mentioning that only the adults complained of this, so maybe we’re just clenching up unnecessarily). Not too heavy or unwieldy for dragging back up the hill, and of course off-season storage is a snap. These are really the best all-around, all-purpose sleds, and it’s a nice bonus that they’re affordable too 🙂 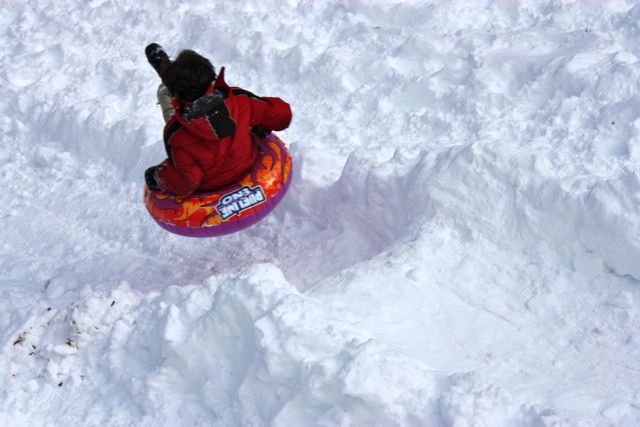 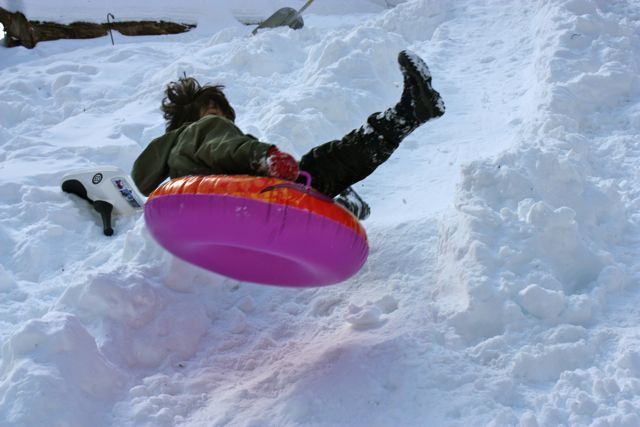 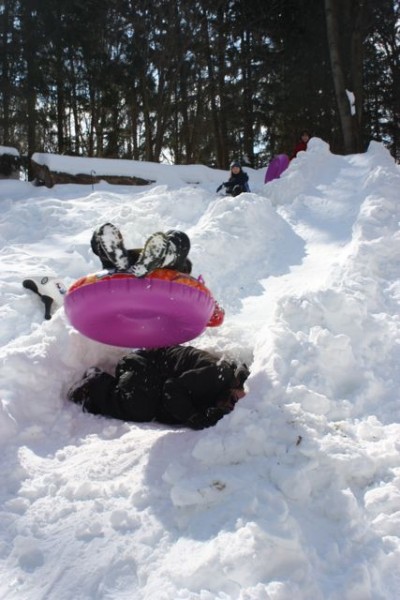 Search under “snow tube” or “snow saucer” on Amazon for a huge variety of circle sleds, ranging from about ten bucks to over a hundred. Check your big box stores for better prices if you don’t carry eco-guilt about those sorts of places.

OK, since I didn’t buy most of these sleds I didn’t really get into the whole “which is most ecologically responsible?” question. If you have the monies to buy a hand-carved sled of sustainable wood from a local small business craftsman, then OH MY GOD DO IT and send me pictures, I’d love to feature them. Good luck getting your kids to pull it back up the hill, though. Think what rockin’ biceps you’ll have at the end of a good snow season.

No, my suggestion here is: hang on to your big cardboard boxes. When we were kids nobody had a sled of their own, it just didn’t snow enough to warrant one (we had that Radio Flyer, but my dad was weird about nostalgic stuff like that). Whenever we got a good blanket of white everybody went to the Sears store and got refrigerator and dishwasher boxes. Just break the thing open- you can pull the front up as a handhold or do it magic carpet style.

You can sled on a broken cardboard box any time of year, in fact- I’ve always preferred summer sledding. Not a fan of snow in my boots.

Next up: we rate the best and worst snow shovels.

What kind of sleds are you using? We’re looking for new ones to try!

Disclosure: this post contains Amazon affiliate links for your convenience, which means if you choose to click on them & wind up making an Amazon purchase I will make cents on the dollar. Feel free to ignore them.