You are here: Home / Conscious Consumerism: Shopping & Reviews / On Staph and Grocery Store Meat, and the Price We Pay for “Fecal Soup” 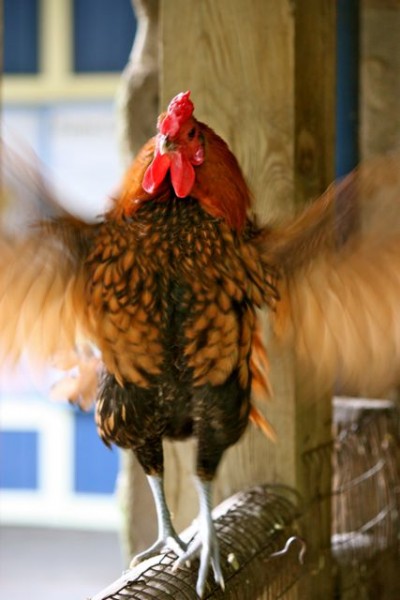 There was an article on the USA Today site the other day, “breaking” the news that half of supermarket meat may have the staph bug (staph is bacteria that can cause a multitude of diseases and infections). Half of the contaminated meats held bugs resistant to at least three forms of antibiotics. They don’t spell it out, but the fear here is MRSA. Full disclosure, my uncle recently died of a MRSA infection, so I do believe MRSA is something worth fearing.

This broad contamination of meat barely qualified as “news” to me. Meat producers know their meat is tainted, and that’s why it’s so emphasized that you need to cook your foods completely.

I think most people know, on some deep dark guilty level, that factory farm conditions for animals are at best unethical and at worst criminally immoral. They are packed into stalls so tight they can’t move or lie down. They are forced to live in their own excrement. They are not properly treated for illness or any injuries they incur; instead, they are preemptively given antibiotics, which is how we get superbugs like MRSA. They are in a state of continual stress; they may never see daylight, or they may be under artificial lighting 24/7.

Then they are corralled into slaughterhouses and treated in ways I can’t really talk about without wanting to vomit and go on some sort of vigilante rampage.

We know all that, and we buy the meat anyway, which is a larger issue than I want to get into right now.

Talking about our large livestock first: Big Ag has bought out or choked out of business nearly all small independent slaughterhouses, so even if you’re paying a premium for happy pigs and cows they are likely being killed using questionable practices, and cross-contaminated with whatever bugs came in with everybody else’s stock.

Over 300 cows are hurled down the non-stop disassembly line every hour. The USDA inspector is the one man responsible for catching abnormalities and signs of disease in these carcasses as they slide by; he is also supposed to be checking whether the animal shows any signs of illness before being knocked unconscious (Mad Cow, anyone?). He is the only person legally regulating whether the kill is humane.

At a rate of five per minute, my guess would be that he does none of these things well.

Of course, we can’t know that. No cameras or guests are allowed on the slaughterhouse floor. And agribusiness is trying to push legislation that would punish people who take these jobs for the purpose of exposing cruelty and illegal practices.

There is no transparency, no accountability.

Deep breath; now for the poultry.

I live in chicken country— Delaware has more chicken than people. Are you ready for the chicken info? It’s sort of rough.

To begin, the USDA Humane Methods of Slaughter Act does not apply to chicken slaughter. The National Chicken Council— not bleeding heart animal activists like me, mind, these are representatives of the industry— estimates about 180 million chickens are improperly slaughtered every year. Meaning they go into the scalding tank alive.

Chickens grow up breast-heavy as they are bred for maximum sale advantage, so even those labeled free-range are probably unable to take advantage of whatever range they are given (free-range just means they have access to the outside, via an open door; it doesn’t guarantee anything more than that). The majority of factory-farm chickens can’t support their own weight on their feet.

Most live out their sorry lives in a space approximately the length & width of a piece of paper, packed tens of thousands to a room. They are stressed, they are immobile, they have diseases and broken wings and bones, they can turn cannibalistic, and they are coated in feces.

During the kill process, the chicken is dragged through a low-voltage electrified water bath, which is not quite enough to knock them out completely. (I would guess a lot of bowel-voiding happens at this time and shared with all the other chickens in the bath water.) They then go through a throat-slitter and a scalding tank, the tank’s heated water coaxing any caked-on filth from skin and feathers, and opening pores that facilitate cross-contamination through the skin.

Contamination can also occur when the chickens are gutted, as intestines are commonly ripped open by the automated machinery. Birds contaminated in this way used to be declared unfit for consumption, but today feces-contaminated chickens are considered only “cosmetically blemished.”

Aside: I wonder, of the half of supermarket meat that was found to be infected with staph, what percentage was poultry? My guess would be a stark majority.

A USDA representative examines each chicken inside and out, but only for a few seconds per: he needs to check about 25,000 each day.

Every week… millions of chickens leaking yellow pus, stained by green feces, contaminated by harmful bacteria, or marred by lung & heart infections, cancerous tumors, or skin conditions are shipped for sale to consumers.

The ride’s not over yet, folks. The chickens then move to a cooling tank where they get to chill in what’s been dubbed a “fecal soup,” one more overly-ripe opportunity for cross-contamination. Remember how the scalding tank opened up the pores? The birds now soak up the fouled water during the chilling process through those enlarged pores. Your chicken parts may be up to 11% of this absorbed liquid (it says so right on the packaging).

Yes, you read that correctly. Not only is it perfectly legal to slaughter sick chickens that are caked in their own feces, but it’s allowable to then steep them in a fetid bath, the waters of which the meat soaks up like a sponge.

We pay extra for that “special sauce.”

And then we feed it to our children.

At this point I feel it’s relevant to mention that I am not a vegetarian, although I have been, here and there, throughout the years. I have trouble with anemia, and I question my own ability to keep my kids nutrient levels where they need to be without the iron and protein found in red meat.

I don’t believe that asking people to become vegetarians is a viable solution to this problem. What we need to do is seek out farmers who produce their meat ethically and hygienically and without the use of non-therapeutic antibiotics, and transfer our budgeted meat dollars to them and away from factory farms. (I find these meats to average out to be more expensive by about a third, often the margin is even closer. The budget solution is to halve the amount of meat you generally eat; use the money you now have saved to fill out your meals with rice, vegetables, eggs. As a nation we eat too much meat anyway.)

As small farmers find more business, they can band together to collectively support small slaughterhouses that kill as humanely as possible and can take the time to avoid cross-contamination.

And maybe, when Big Ag sees that we’re putting our money where our mouth is, they’ll alter their own practices to better fit our demands as consumers. As parents, goddammit.

I can already feel the rising swell of protests, and at the crest of each wave is the word MONEY. And my response to that right now is: money is what drives these practices. It is what drives the collective misery of factory animals with no voice, factory farmers with no rights, of those unlucky enough to live near a factory farm or slaughterhouse and bear the health consequences of that fate, and of all those who contract food-borne illnesses EVERY DAY. These corporations don’t care about you, your family, or your health. They care about YOUR MONEY.

Look at it as a health decision or an ethical decision, it makes no difference to me. But we need to stop affirming that these practices are OK by handing over our hard-earned money to companies that knowingly put our children’s health at risk.

**While I’ve read many different accounts of factory farming and slaughterhouses, I’m not an expert. My main source here was the one I most recently finished, Eating Animals

by Jonathan Safran Foer, except where indicated otherwise. It’s a comprehensive look at what we eat, where it comes from, and why it matters; an at-times excruciating exposé but the horror is balanced by the author’s treatment of those who are doing it right. I highly recommend it, but I know that I’m preaching to the choir. Those whose lives would be most altered by the reading are those who would never read it… for precisely that reason.