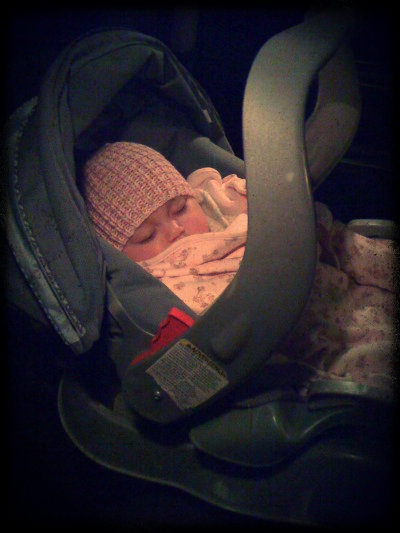 Kids need to be in car seats. Good ones.

Every kid. Every time.

So it really sucks to find out that more than half of car seats are exposing kids to toxic chemicals. Babies are particularly vulnerable since they are rapidly developing and tend to spend a lot of time in their seats (especially if, like mine, they slept well there).

The latest research, based on tests of over 150 car seats currently on the market (2011 models), was just released by the nonprofit Ecology Center. They tested for:

Bromine: Associated with the use of brominated flame retardants (BFRs), which are added to plastics for fire resistance. Some BFRs have been associated with thyroid problems, learning and memory impairment, decreased fertility, and behavioral changes. A recent peer-reviewed study published in Environmental Science & Technology found a majority of baby products tested, including car seats, nursing pillows and baby carriers, contained chemical flame retardants either associated with adverse health effects or lacking adequate health information. Although fire retardants in foam are necessary to meet certain fire-safety standards, non-halogenated fire retardants are available, and many have a better safety profile. Brominated flame retardant chemicals that are either deemed toxic or that lack adequate health safety data were detected in 44% percent of the 2011 car seats tested. (NOTE: HealthyStuff.org did not test for all hazardous flame retardants, particularly chlorinated flame retardants (CFRs), and seats may contain other chemical hazards).

Chlorine: Associated with the use of polyvinyl chloride (PVC), which is widely used in plastics and is of concern to the environment and public health during all phases of its life cycle. PVC contains chemicals called phthalates, some of which have been associated with decreased fertility, pre-term deliveries, and damage to the liver, testes, thyroid, ovaries, kidneys, and blood. There is also evidence that phthalates can pass from mothers to babies through the placenta and through breast milk.

Lead: Lead is sometimes used as an additive in plastics. Exposure can lead to a number of potential health effects, including brain damage, learning disabilities, and problems with the kidneys, blood, nerves, and reproductive system.

Other: Other chemicals tested as part of HealthyStuff.org include antimony, arsenic, chromium, cobalt, copper, mercury, nickel and tin. The substances in this category are allergens, carcinogens, or cause other adverse health impacts depending on the concentrations and exposure levels.

It’s sort of amazing that we have something called the “Toxic Substance Control Act” in place but it doesn’t really seem to be doing much to control toxic substances, does it?

So here’s the best and the worst. Baby shower accordingly.

I’ve linked the good ones, but you’ll still need to do your homework to figure out which fits your safety/ comfort/ convenience/ toxicity ratios.

And even if you already own one of the more toxic ones, and can’t afford a new one, just remember ANY CAR SEAT IS A GOOD CAR SEAT. Oh my god, it drives me insane when I see cars on the road with kids cruising all over the backseat. Or sitting up front when they are CLEARLY too young. SAFETY FIRST.

Check out www.HealthyStuff.org for the complete list of car seat rankings. And while you’re there, sign the petition asking Graco and Evenflo to disclose and phase out hazardous chemical flame retardant additives.

They’re listening. Are you getting noisy?