You are here: Home / Fitness, Health, Happiness / 10 Health Benefits of Sunshine – Get OUTSIDE!

The sun does not shine for a few trees and flowers,
but for the wide world’s joy.

May is Skin Cancer Awareness Month.

Skin cancer is the most common of all cancers, afflicting one in five Americans (one in three Caucasians) and accounting for nearly half of all cancer cases in the US.

It only takes one blistering burn to increase your risk of skin cancer.

And kids and teens are especially at risk, as they’re more likely to seek out sunshine year round.

That being said, it’s also important that we don’t overreact and keep them indoors any more than strictly necessary. The average American kid spends just 4-7 minutes daily in unstructured outdoor play, a factor that has been tied to childhood obesity, stress, falling fitness levels and decreasing learning ability.

In addition, the sun and the vitamin D it supplies contain their own health benefits. 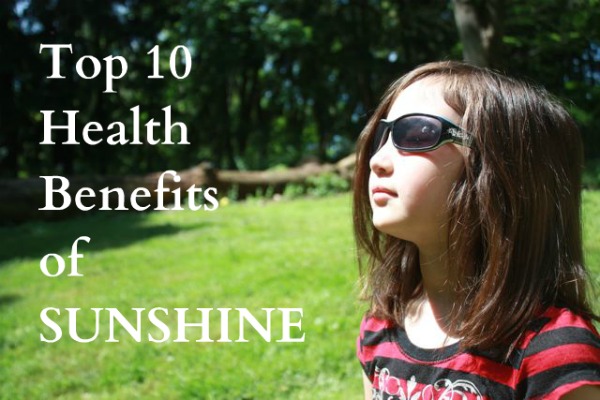 1. Reduce risk of Type 2 diabetes. Once considered an adult-onset disease, type 2 diabetes is reaching epidemic proportions in our kids. It’s a lifelong disease, and harder to treat in the young.  Some studies suggest that vitamin D can reduce the risk of developing it (one study found that those with high levels were 40% less likely than those with low levels).

2. Reduce cancer risk. There are lessened mortality rates for 15-20 types of cancer in regions of higher solar UVB exposure, particularly for breast, colon, and rectal cancer. Those patients who had higher vitamin D blood levels when diagnosed had nearly twice the survival rate of those with the lowest levels.

4. Protect eye health. Vitamin D has been tentatively linked to lower incidence of cataracts, and studies indicate good D levels correlate to a lowered risk of macular degeneration as you age.

6. Improve metabolism; fight obesity. Several studies show correlation between sun exposure and an increase in metabolism, although the reasoning isn’t cut and dry. One hypothesis that makes a lot of sense to me is that decreased time in the sun leads the body to believe it’s winter, causing the body’s metabolic processes to shift into a winter fat-storing mode. More about that here.

7. Lower blood pressure. The warmth of the sun can improve circulation, and heightened vitamin D levels have been shown to reduce blood pressure in hypertensive subjects— perhaps as effectively as medication.

8. Reduce stroke risk. There are likely a lot of factors at work here, but in one survey people who lived in areas with less sun exposure had a stroke risk that was 60% higher than those who lived in sunshine-y regions.

9. Sleep better. Daily time in the sun helps to regulate circadian rhythms for a better night’s sleep. And sleep has its own host of health benefits.

10. Feel better. Sunshine has been shown time and again to improve mood, fight Seasonal Affective Disorder and lessen stress. Not to mention, we’re more likely to MOVE when we’re outside basking in the sun. And physical activity is definitely good for you!

Vitamin D deficiency is also implicated in a lot of other health complaints, from muscle pain to the resurgence of rickets (!) in children.

Is vitamin D from sunlight better than taking supplements?

However, given that vitamin D deficiency is one of the most common nutritional deficiencies (some say the most common, while others give that distinction to iron) and the many ways D is beneficial for the body and mind, I’m championing sunshine, enjoyed responsibly, supplemented by diet.

The solution? It’s so easy.

Wear your sunscreen— no sunscreen blocks 100% of the sun’s rays— but make a point of frequently getting out there to get short doses of golden sun.

Take frequent breaks to stretch your legs and breathe in some fresh air.

Play at the park with the kids.

Whatever. You’ll get more vitamin D. You’ll be moving more and sitting less. You’ll be pumping fresh air into your lungs instead of the still, chemical-laden air of our sealed-up buildings. You’ll enjoy the mental benefits of communing with nature and taking a break.

Some months out of the year, it’s tough to get enough sunshine— which can lead to Seasonal Affective Disorder. Learn the symptoms and how I cope with it here.