You are here: Home / Family, Parenting / Girlfriend Can Ride a Bike 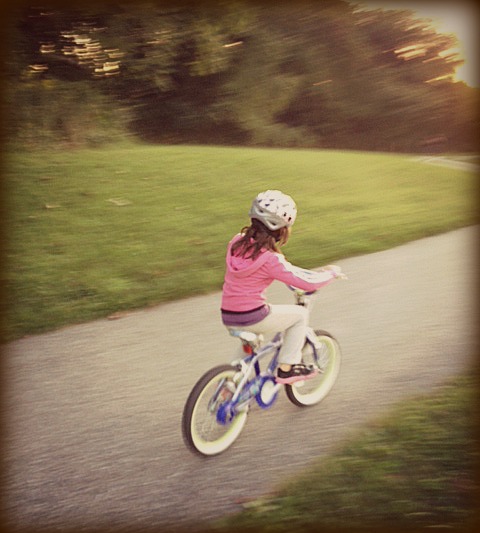 After your first day of cycling, one dream is inevitable.

A memory of motion lingers in the muscles of your legs,
and round and round they seem to go.

You ride through Dreamland

on wonderful dream bicycles that change and grow.

-H.G. Wells, The Wheels of Chance

I know, it’s terrible. She’s 8 and just getting her training wheels off. We just don’t have anywhere convenient to ride… so we’ve neglected to take the time to teach her.

She doesn’t like to be taught, by the way. She likes to know how to do it. I did my run around the park while her father tried to teach her, she got mad and stubborn, and the two of them sat on a bench, equally willful and perfectly prepared to wait it out until I was done and they could go home.

I didn’t witness it but trust me, I know exactly what it must have looked like.

Apparently a woman passing by asked Cass if she was learning to ride her bike, and Cass gave her some unsatisfactory answer. Or maybe she took her cues from Jeff’s grumpy butt and the set of Cass’s shoulders, I don’t know. In any case she took the bike from Cass, got her on it.

And taught her how to ride.

All you have to do is try. A willing suspension of disbelief that gravity will win. The sudden, unlikely belief that you can do it, a burst of confidence given from a stranger.

I didn’t see any of it; I heard the story from Maverick when he met me with some water as I rounded the turn on my second loop around the track (yes, he’s a good boy).

Ten minutes. Ten minutes for someone to stop, teach my daughter to ride, and disappear.

Jeff still had to work with her on turns and stopping, but the whole thing had transformed from a reluctant lesson to a shared pride and joy.

And I was suddenly struck by the memory of what it was like to learn to ride as a child. My father’s hands, releasing their hold of the bicycle seat. The feeling of speed, of freedom, of flying. The still-present fear of falling… and not quite caring. 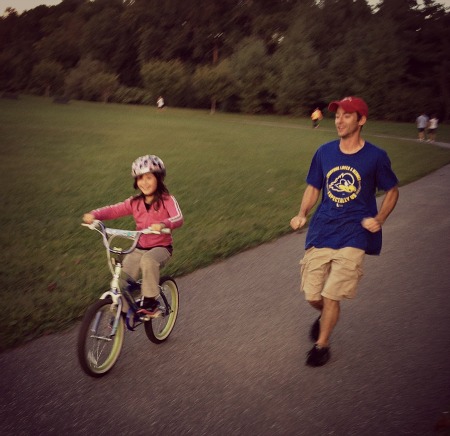 Bicycling is the nearest approximation I know to the flight of birds.

The airplane simply carries a man on its back like an obedient Pegasus;

it gives him no wings of his own. 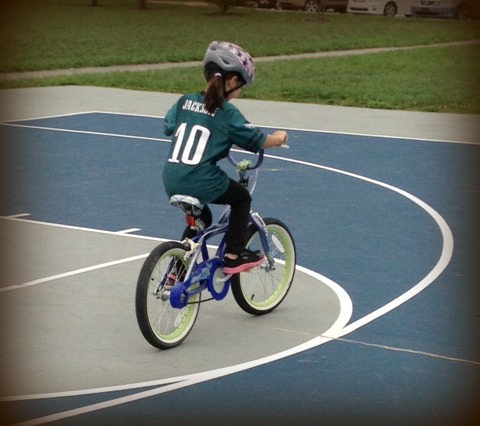 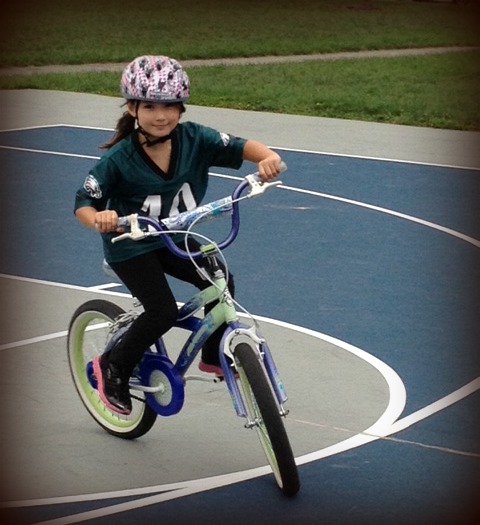 The hardest part of raising a child is teaching them to ride bicycles.

A shaky child on a bicycle for the first time needs both support and freedom.

The realization that this is what the child will always need can hit hard.

The realization that this is our last child we had to teach to ride— and that we gave that chance away— it’s kind of rough.

Still, I do like the magical quality of the tale. Thank you, kind stranger, for helping us avoid what probably would have been a battle of wills and scraped knees, drawn out for who knows how long.

Do you want to come back in a year when Jacob gets his learner’s permit?