You are here: Home / Photography / How Lily is my Valley 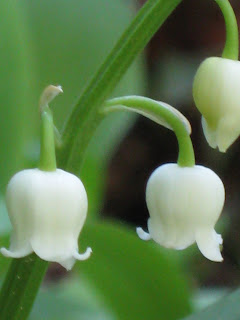 “They were pleasant spring days, in which the winter of man’s discontent was thawing as well as the earth, and the life that had lain torpid began to stretch itself.”
-Henry David Thoreau

The lilies of the valley are just about to bloom, and I am very excited. I think they are probably my favorites of the no-work-involved plants. We started with maybe five or six, but now they’re popping up all over, including between the bricks of our small patio.

This one is a lone early bloomer. 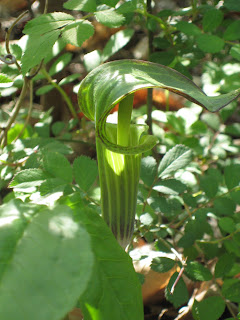 I also found a Jack-in-the-Pulpit, which we had initially mistaken for poison ivy because the pre-flower leaves are three-lobed, and all I retained from Girl Scouts is “leaflets three, let it be”. Thankfully we had not got around to yanking them out. I spent five minutes photographing Jack from all angles, only to find that we’ve got dozens of these things, they’re just very good at hide and seek. 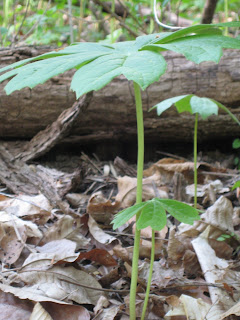 Here we have the mayapple, which I have always referred to as fairy umbrellas. The News Journal claimed that these are common- we have several miniature forests of them, I would guess numbering near a thousand- but it is more rare that they produce the promised “apple” in May, because they require twin umbrellas to flower. I got all revved up- new mission!- and was checking daily, on the theory that we have so many, we’d surely produce a flower.

Yesterday the kids and Jeff went trailblazing in the part of our property I have dubbed “deciduous forest”- a lovely turn of phrase meaning “untouched and full of poison ivy and stickerbushes”. I went offroading through the biggest mayapple colony.

Success! With glee I recorded the creamy flesh of the flower. (Yes, the description is yucky. But the petals are both creamy and fleshy, and I don’t know how else to describe it.)

Then Maverick found another one. Then I did.

Yeah, I think maybe the twins might be better described as “less common” rather than “more rare”. Perhaps one in ten. I got a few shots off before my battery died; if I manage a better one, I’ll update. 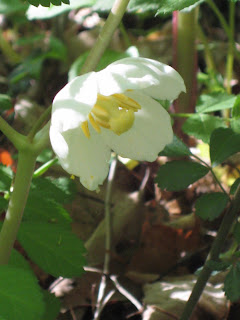 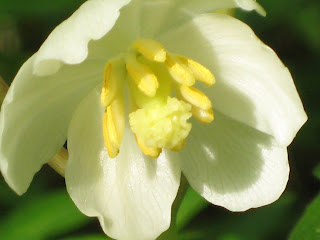 I also learned from the News Journal that the term for these lovelies is “spring ephemeral“, referring to the fleeting bloom period: the short time when the earth warms enough for insects to awaken and pollinate, and the sunlight is able to illuminate the woodland floor; before the trees fill in the leaf canopy that shields the sunshine.

So if I hadn’t become suddenly and irrationally taken with the concept of documenting and photographing the backyard wilderness, I’d have missed them entirely.

Both the term and the concept are deliciously satisfying.

Other spring ephemerals include:

Altogether the best looking list of words I’ve written in a long time. (All good candidates for names of rock bands as well.) I will have to do some research to make sure I haven’t recorded any of these and dismissed them as “violet”. 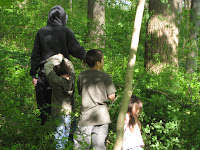 Here’s our team of intrepid explorers. Hopefully the newly blazed path will yield all sorts of new and exciting things!