You are here: Home / Green Home & Garden / One More Thing about Hanging Laundry

Cassidy put on a pair of pants with a wasp inside, and he stung or bit her, we’re not sure which. She screamed and cried for about a minute, then I remembered that supposedly a thick paste of baking soda and water is an effective remedy for insect bites and stings. So we poured some baking soda on a cold wet washcloth and held it on the site, and Cass settled down after another minute.

She wanted to know why the bug hurt her, and we explained that it was trapped in her pant leg and she scared it when she put the pants on. She accepted this fairly readily and wanted to see the bug, but we assured her that it had been taken outside.

Another minute and I took off the washcloth; the swelling was way down. We washed it off and put a Sesame Street band-aid on it, and she was off and running.

This was my first experience with a sting, so I am not sure what the usual recovery time is. Cass walked for hours that morning at Ag Day, refused Tylenol for the pain, and never complained about it again.

But I would venture to say:

Baking soda once again proves itself a miracle powder.

Here she is, hard at work on our next post: 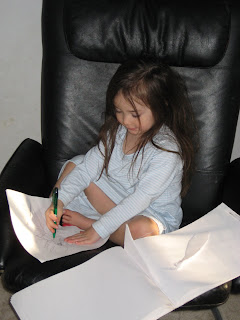