When I was in high school, I had a theory: Girls travel in packs of three. The pretty one, the smart one, and the fun one.

I think I can apply this to the three Rs (reduce, reuse, recycle) as well.

Recycling gets all the action. People get behind it because it’s dynamic and concrete. It gets its image printed on Tshirts. It’s the face of the green movement, the spokesperson, leader of the pack. It’s the pretty one.

Reusing requires a bit of creative thinking. People love to see what crazy ideas others have come up with. LP as snack tray? Cool! Homes made from shipping containers? Super awesome! Ottomans from old washing machine drums? Dang, wish I’d thought of that when my mother-in-law had an washing machine drum sitting in her garage! Reusing (and its twin, repurposing) is definitely the fun one.

Which leaves us with poor old Reduce, less popular but smart as a whip. There would be less need to reuse, repurpose and recycle if we didn’t buy the stuff in the first place. Recycling is great, don’t get me wrong, keep doing it! but ultimately it still uses a lot of energy and causes its share of pollution. And while reusing and repurposing extends the life of an item, its final destination is still going to be the landfill.

I think I’ve mentioned before that I am in the throes of a massive declutter, trying to free up some space so I can breathe, and just getting rid of stuff so I don’t have to organize it or clean it or shuffle it around anymore. Right on the heels of that decision came the realization that all this work will be for naught, if I keep letting new stuff in the house.

Right around then I came across Crunchy Chicken’s Buy Nothing Challenge. I wasn’t the little joiner yet that I’ve become (in the last two weeks or so; what’s happened to me?) so I didn’t officially sign on, but in my mind I made the commitment. Aside from food, gasoline and bills, I have not bought a single thing in three weeks. Nothing. However, in the next month I have a flurry of wedding activity, which requires gifts and clothing, and I don’t think I’ll be able to sustain the buying of nothing. (More on my attempts to keep it green and simple during wedding season later this week.)

So the new challenge: What other ways can I reduce?

The most obvious place to start is my carbon footprint. By my calculations online, our family’s footprint is lesser than that of your Average American, but surely we can do better than that. (See how I said that without any sarcastic comments on the Average American being a wasteful, lazy, inconsiderate slob? How nice I’ve become!) So I’ve been doing some thinking and clicking around, and here’s what I’ve come up with: 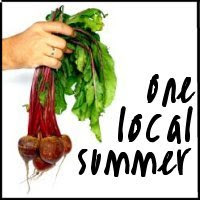 Help a lady out! What am I overlooking? What other ways are there to reduce?

What do you do?