You are here: Home / Everything Else / Bad Weather Ahead? 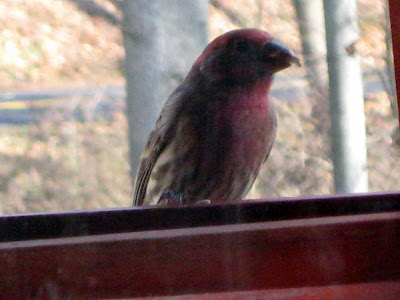 I hope you love birds too. It is economical.
It saves going to heaven. 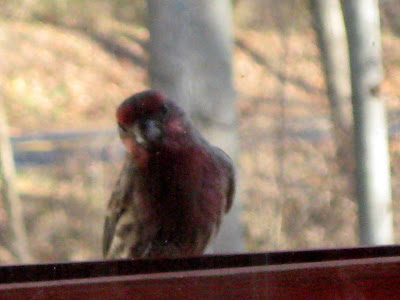 All I know is, at the feeder outside the kitchen window we usually get some chickadees and a pair of titmouse (titmice?) and an occasional appearance from the resident downy woodpecker.

Today is a little more reminiscent of a Hitchcock movie.

Today I’ve seen blue jays and cardinals at the kitchen window. Grackles and snowbirds (juncos) and some little brown job that I believe to be a White-Throated Sparrow- as opposed to “regular old sparrow”- as it has brilliantly neon yellow markings on his head. All of these birds are usually content with whatever falls to the ground beneath, but today they are joining the party at the feeder.

I even saw a red-bellied woodpecker, and let me tell you, that bird is much bigger and his bill more threatening than one would think, particularly when one comes face-to-face with him before one has had one’s coffee.

And they are loud! Squawking and yelling and cursing. No melodious song going on here, no tender harmonies or cheerful chip-chip; just a bunch of aggressive drivers hollering to get out of the way. To be honest, I am finding their sense of urgency a bit unnerving.

Which brings us to two logical conclusions: