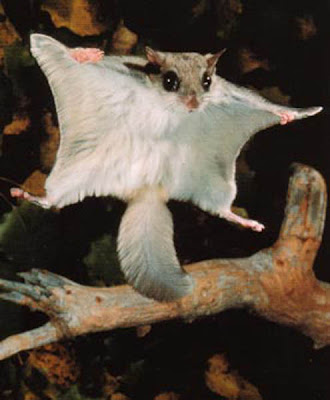 It’s a flying squirrel in my bedroom!

Our brightest blazes of gladness are commonly kindled by unexpected sparks.

Jeff is sick. I have little sympathy because I had the same cold for over a week, it’s not such a big deal. But, you know, maybe if someone had made his own lunch or helped with dinner while I was sick, maybe they wouldn’t have caught it from me, or maybe I would care more now.

Anyway, when Jeff is sick he is whiny and likes to call out from bed to coerce others to bring him soda, snacks, the remote. I find this annoying. Two nights ago I hear a drawn out “Rrrrooobbbiinnnnnnnnn” and I ignore it because he’s really not that sick, he can turn off the light himself.

And then I hear, “HHHHEEEELLLLPPPP” and it’s a weird hushed yell.

I actually grow a a tiny bit concerned and go to see what the deal is. Jeff is standing on the bed. He is pointing. His demeanor is not entirely unlike that of the housewife on Tom and Jerry when she has spotted Jerry and calls for Tom; I can’t remember if he was actually on tiptoe, but that is the distinct impression in my memory. Jeff says, “Something just stuck its head out from the side of the TV and looked at me.” A mouse? “Noooo. Something MUCH BIGGER. I think it might have been a squirrel.”

There is not that much room behind the TV. I don’t think it’s a squirrel. But I am vaguely concerned that it might be a rat. I know it’s discriminatory of me, but while I am OK with fielding mice and shrews and snakes and spiders, I am less excited about the prospect of manhandling a rat. I know they make wonderful pets and all, but I just don’t love rats. Go ahead, judge me in the comments.

Of course Jacob has not charged the solar flashlight- Jacob NEVER charges the solar flashlight, it’s so hard, you know, to simply place it in the window– so we get out the gooseneck lamp. And I see it. It is small and stripey. I think it is a chipmunk. I go get the butterfly net. After some chasing back and forth behind the TV, the maybe-a-chipmunk scampers up on top of the TV. And Jeff says, “That’s no chipmunk. I don’t know what that is…” It still looks chipmunk-y, but it has a long, flat tail. It’s just sitting there, perched up on top of the TV.

I could easily just reach out and grab it but Jeff says no, who knows what germs it has. Whatever. I guess I don’t want it to bite me. I swing the net… and it LAUNCHES straight at me from the top of the TV, arms and legs akimbo, the skin parachute is revealed, and I AM NOT JOKING, it glides halfway across the room, landing on the wall, its nails somehow gripping the wall.

I scoot over with my net and it launches again, this time landing on Cassidy’s door frame, I am thinking oh no, oh please no, do not go into cass’s room because we will never find it again amongst all her things which she has methodically arranged in the center of her floor to build a nest… It clambers up the door frame like Spiderman, insanely fast, nails clicking… Jeff all this time, jumping on the bed squealing like a schoolgirl, “Flying squirrel, it’s a flying squirrel… Eeeeeeeeeee” (this whenever it would launch again)

And I bring the net down. I have caught him. We look at him up close and he is soooo scared and cute. (I did take some pictures but the squirrel is invisible through the mesh of the net.) We wake the boys so that they can see. We give him a careful pet. And then we take him outside and let him go.

Cassidy asks, “How did the flying squirrel get inside?” I have no idea. I am just so grateful we found him before the cats did.

That’s my show-and-tell for today! Anything unexpected happen to you lately?