You are here: Home / Everything Else / Not the Anti-Environmentalist He Thought He Was 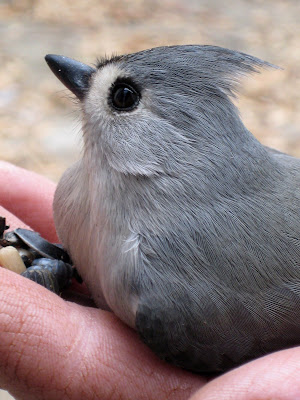 I once had a sparrow alight upon my shoulder for a moment, while I was hoeing in a village garden, and I felt that I was more distinguished by that circumstance that I should have been by any epaulet I could have worn.

So. As you know, I have three children. And if you have paid careful attention, you’ve learned that they have a father, to whom I am married. I don’t speak of him much here, and for months I was strictly under orders not to speak of him at all. Why is this?

Because Jeffrey does not want to play my reindeer games. When I began this blog, he was mortified by my “treehugging bull”. He did not recycle. He went through a can of Lysol a week. He sprayed Raid like it was going out of style. He would wash a single pair of jeans, on hot, and then run it through the express cycle in the dryer. He forbade me to buy any more seed for the backyard birds. “Rats with wings,” he said.

This led, more times than I care to admit, to a mental and ethical crisis when I would sit to write a post. How could I speak of moving towards a sustainable, environmentally conscious life when I lived with someone who cancelled out my every move? I wanted to give up and give in, on all of it- the greening, the caring, the writing- all the time.

But I didn’t. Partially because I’m a contrary pain in the butt and given to a certain level of passive aggressiveness. Partially because you can’t unlearn what you already know, and I knew too much about how little acts add up to bigger change.

But mostly because I think other people’s behavior serves as poor excuse for your own.

So I kept at it. I grew a garden, and Jeff grudgingly helped (otherwise I surely would killed everything. I have a black thumb). I kept recycling, and one day I noticed I was no longer having to pull Jeff’s recyclables back out of the trash. I mentioned that I wanted Jeff to build me a compost bin, and he didn’t immediately dismiss it.

Maverick continued to feed the birds, and to tell his father which birds were at the feeder. Soon Jeff was drinking his coffee at the window watching the feeder, and identifying each bird by name.

On cold days he’ll tsk tsk me for forgetting to feed them.

Sunday was a rare day with nothing scheduled, nothing particular to do, and Jeff was going batty, pacing the house, when there was a loud thwap against the bedroom window. I didn’t even look up from the book I was reading; I knew what that sound meant. We have an enormous window in that room, and almost every day some poor bird flies into it. Cassidy knows the drill; when we hear the noise she goes and checks that all the cats are indoors, and then keeps an eye on the stunned bird until it recovers and flies away.

Jeff, however, is not usually home during the day, and went to investigate. Upon looking outside, he cried out, “Oh, no! Tufted Titmouse is my favorite bird!” He then ran out the door- no coat, no shoes, mind you- and cradled the titmouse in his tough-guy, anti-environmentalist hands.

He held that bird out in the frigid cold and fed it sunflower seeds until it regained its wits and took off.

Why am I telling you all this? I am offering this story as inspiration to take heart and keep going. The bagger at the grocery store may give you the skunk-eye when you pull out your reusable shopping bags, and your husband, like mine, may favor mass-produced non foods like TastyKakes over the all natural, healthier snacks that you labor over. There are many people who don’t understand or don’t care about the green movement- yet.

But they see you. They see that you care.

You are making a difference.

A little bit here, a little bit there. It happens without you even knowing it.

And sometimes, you get to witness the difference you’ve made. 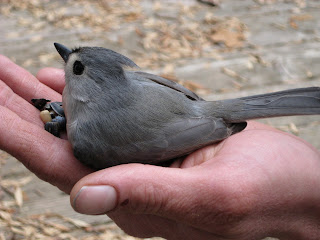 P.S. I feel I should add that after this took place, I sent Jeff to the store to pick up some fruit for lunches. He selected grapes packed in a plastic bag, which he then deposited into a plastic produce bag, which came home bagged in a plastic grocery bag. So we’ve still got a ways to go.

But at least now he likes birds. So much so that he has a favorite.