You are here: Home / Everything Else / We Make Pasta 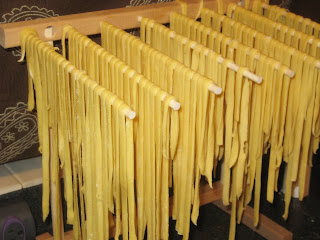 No man is lonely eating spaghetti;
it requires so much attention.

We eat pasta once a week, one of two weekly vegetarian dinners. I like this arrangement because it basically means I’m off the hook for dinner that night- just boiling water and opening a box. Jeff, however, always moans and groans on pasta night. Recently he commented that he likes freshly made pasta, and he’d eat it all the time if we made it. As long as he had freshly grated parmesan. And a loaf of bread on the side.

OK then. I bought a pasta machine.

It was a pain at first, the pasta wasn’t cutting all the way through and so I was having to separate each strand. Thinking all the while, there is NO WAY it is worth the time to do this, not when a box of pasta can be had for a dollar. After our first few trials, though, we got the hang of it and everything went much more smoothly- I think maybe we just didn’t let it rest long enough. (I can hear my Italian friends laughing at me. Keep quiet, you.)

Jeff had started a loaf of “rustic bread” earlier in the day, and as we finished up rolling and cutting our fettucine he checked on the dough, ending its second rise. I don’t know if it was overproofed or whether he just handled it roughly, but it just went pfffft– deflated into a pancake. He was ready to toss it- angrily, I might add- but I suggested that he knead it one more time and leave it alone for a bit and maybe it would rise again.

It did, and he brushed the top with some butter seasoned with a witch’s brew of god knows what- I suspect steak seasoning- and put it in to bake. 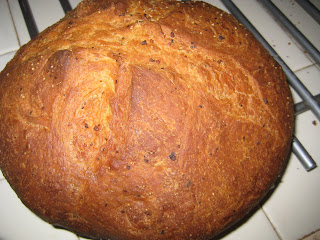 It was better than any of our breads thus far- the crust was both flaky and chewy, the seasoning was yum, and the texture was perfect.

Lesson learned: never give up, never throw anything away.

The pasta was delicious- we topped it with Mr. Newman’s red sauce, I’m all out of the stuff we froze over the summer. We were worried it wouldn’t be enough- it doesn’t look like a lot, does it?- but had leftovers for lunch the next day. They really “plump when you cook ’em.” Fully organic meal, too.

We really felt like we had done something productive with our day. As opposed to the leaf raking, which today’s high winds have completely undone.

I think next week we’ll show the boys how to roll and cut the pasta, and let them cook on Sundays. It’s really not hard and I think they’ll enjoy being responsible for a weekly meal.

Anyway, that’s something I learned to do this week. Did you learn anything new?