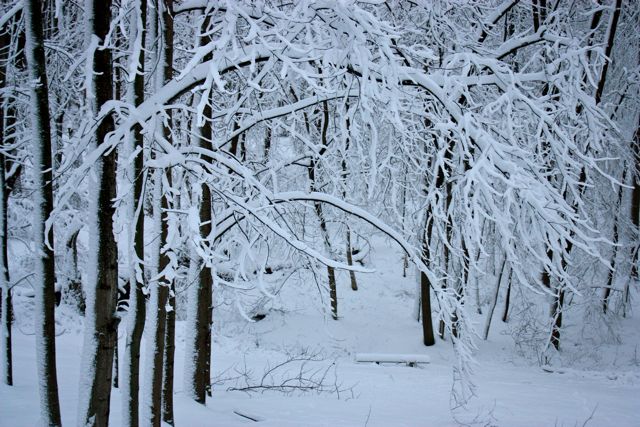 Announced by all the trumpets of the sky,
Arrives the snow, and, driving o’er the fields,
Seems nowhere to alight: the whited air
Hides hills and woods, the river, and the heaven,
And veils the farm-house at the garden’s end.
The sled and traveller stopped, the courier’s feet
Delayed, all friends shut out, the housemates sit
Around the radiant fireplace, enclosed
In a tumultuous privacy of storm.

John Bolaris said the snow was going to start in the morning, but no big deal. Nothing to worry about. Changing to rain. The real snow wouldn’t begin until late afternoon, and then the wallop was expected during the overnight hours.

By 10am schools had been declared closed; snowflakes as big as my fist were sailing past the window. By early afternoon my yard looked like this. 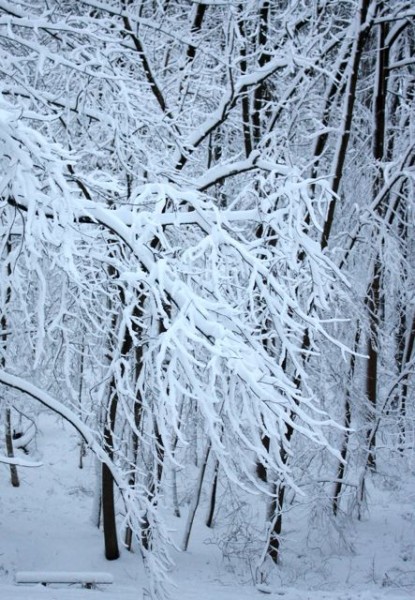 Note how dark the pictures are: although it was daytime, the snow-filled clouds fully blotted out the sun. We already had four or five inches on the ground and the tree limbs looked heavy. And the predicted storm hadn’t even arrived yet, this was just bonus snow.

The kids and I dutifully shoveled the stairs, the walkway, the driveway, in the freezing rain, so that we wouldn’t have an impenetrable layer cake of snow and ice to chip through the next day. The Dogness watched us from the dry porch and wondered what ailed us.

And then we all hunkered down and waited for the “the hammer,” “the boom,” “the match to the kerosene,” the “THUNDERSNOW.” (These are all Bolarisisms for “one hell of a snow.”)

And it came. Holy crow.

I only heard one clap of thunder, and it was still freezing rain at that point, so once again no thundersnow for me. But the snow was fast, furious, thick, and sideways.

Jeff went out and shoveled in the blizzard in the middle of the night so that he would be able to leave for work in the morning. When morning came, you couldn’t even tell any shoveling had happened. More depressing words have never been written.

At 11ish, while I was trying to write a blog post, I saw sparks through my bedroom window. And heard a boom.

Not John Bolaris’ boom.; a boom no one wants to hear in the midst of a snow storm with blizzard conditions. The boom of some sort of electricity-generating equipment blowing out.

So, we spent the next 36 hours trapped in a house with no heat. No electricity. No running water, no flushing toilets.

We opened the curtains to let the sun warm the parts of the house that it could. 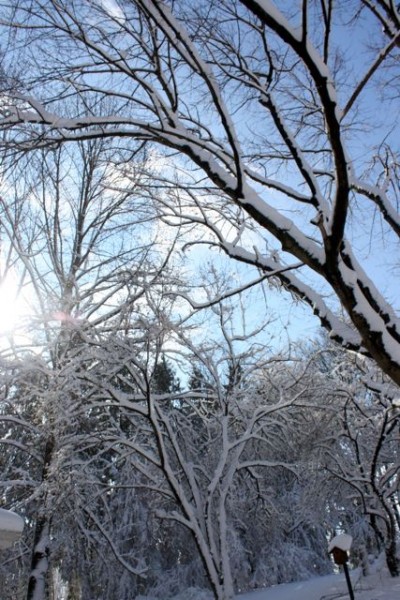 We couldn’t help but laugh at the people who drove down our road only to discover it was impassable. They were many.

My brother’s dog barked at them jubilently, luckily not testing the boundaries of the compromised electric fence. 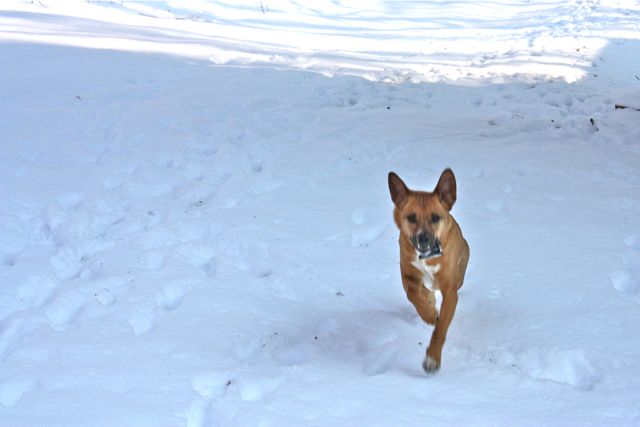 We trudged out to shovel the driveway for the 2nd time in 2 days and returned to “warm up” in a 49° house.

We read books. We hung out and talked. The kids played each other on their Nintendo DS things until the batteries gave out.

We did the best we could to stay cheerful, to roll with the punches, to have faith that PECO was going to come save us soon.

Dude, it sucked. Laura Ingalls Wilder I am not. She can have her little house on the prairie, I need heat and internet.

Yes, it’s healthy and good to unplug from time to time. Yes, it’s fun to play board games. Yes, it’s oddly satisfying to see I’m paying $0.00 in electricity at the moment. 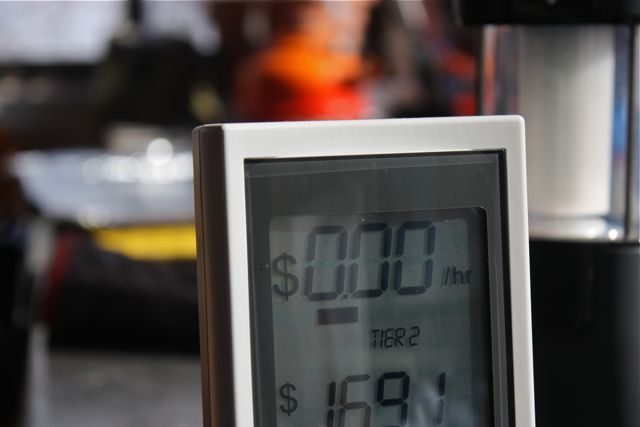 Piling 5 people into one bed to keep warm in a house that’s only growing colder as the night wears on.

Discovering that half our gloves and hats had been thrown into the wash, but never made it to the dryer.

Washing your hands in candlelight-melted snow.

Hauling in buckets of snow to melt so you can flush toilets. Discovering the house isn’t warm enough to melt the snow.

Refereeing arguments between children who are on their 3rd day off from school and are frankly sick of each other.

Finding new ways to entertain your 6yo once the sun has gone down, especially since it’s too cold to get out of bed (so no flashlight tag or anything like that). We actually all fell asleep somewhere in the vicinity of 7:30pm out of pure boredom. (All that shoveling may have had something to do with it too.)

Thankfully, PECO did arrive during the night and we had power restored in time for everyone to get a shower and make it to their (two hour delayed) school bus on time. (God bless Avon Grove School District for having school that day.)

I’m thinking we are going to have to bite the bullet and buy some sort of backup generator. I’m hoping we can find some sort of hybrid that can be at least partially powered by solar.

That, or we pony up the many thousands of dollars to have the lining of our chimney replaced so we can safely use the fireplaces.

I’m also seriously considering one of those personal Wi-Fi things through my cellphone provider (Sprint). I can connect to the internet with TetherBerry, but it seriously drains my phone battery and when you have no idea how long you’re going to be without power, a working phone does wonders for your psyche. I work online, so I was seriously stressed about not having internet access.

Maybe add a solar cellphone charger and laptop charger to that list.

We already own several solar-charged flashlights and lanterns that came in handy- we keep them in a kitchen window so that they’re always charged and easy to find. We also keep bottled water on hand for outages. The food in the fridge, we put out into the snow to keep cold.

Mental note to always make sure the stuff in the wash goes into the dryer before going to bed.

Any more tips and tricks for making life during a power outage go more easily? Or advice on buying a generator? We have another storm scheduled for Wednesday. 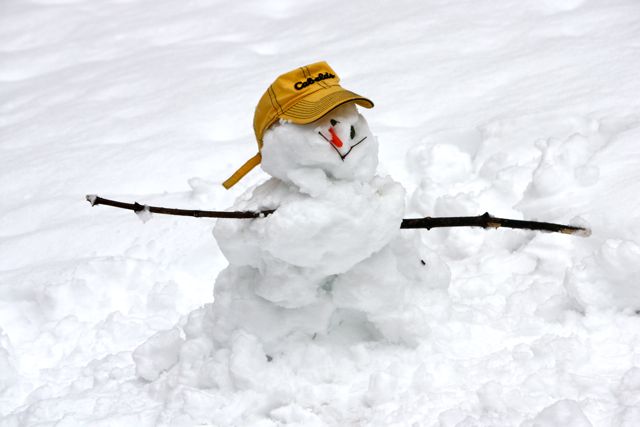