You are here: Home / Food & Recipes / Attention State of Maine: Hands Off My Whoopie Pies 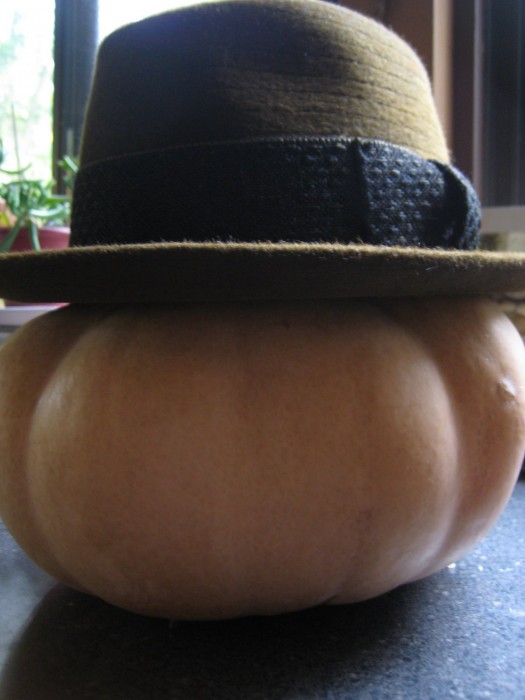 Remember all those women on the Titanic
who waved off the dessert cart.

Every year in late October or early November I buy a cheese pumpkin.

These are orange/yellow pumpkins, round and flattish like a cheese wheel. They are excellent for making pumpkin purée with, as the flesh is sweet and not too stringy.

The cheese pumpkin starts out as an autumnal decoration, hanging out in the hallway, moving to the dining room table around Thanksgiving, migrating eventually to the kitchen counter.

In February we have the annual Argument About the Pumpkin. It goes something like this:

“I’m throwing this pumpkin away.”

“Well, I’m not eating whatever you make with that disgusting old moldy pumpkin.”

He ate it. Along with his words.

For the Cinnamon Cream Cheese Frosting:
* 8 oz of cream cheese, softened
* 4 ounces of unsalted butter, softened
* 2 cups of powdered sugar (this was way too much for me; next time I’ll cut it by half)
* 1 teaspoon of cinnamon
* ½ teaspoon of cardamom (I left this out, I don’t even know what it is)
* 1 teaspoon of vanilla
* 1 tablespoon of milk

To make the purée, I hacked the cheese pumpkin into about a dozen pieces, scooped out the seeds and stringy bits, put ’em on a cookie sheet & stuck in the oven at 350 degrees until they were easily pierced by a fork, 45 minutes to an hour (my pieces were not of uniform size, have I mentioned I am lazy?). Once they were cool I just peeled the rinds off and ran them through the food processor. This pumpkin yielded about 4 cups worth of purée; I held back the cup I needed for this recipe and froze the rest into three one-cup servings. 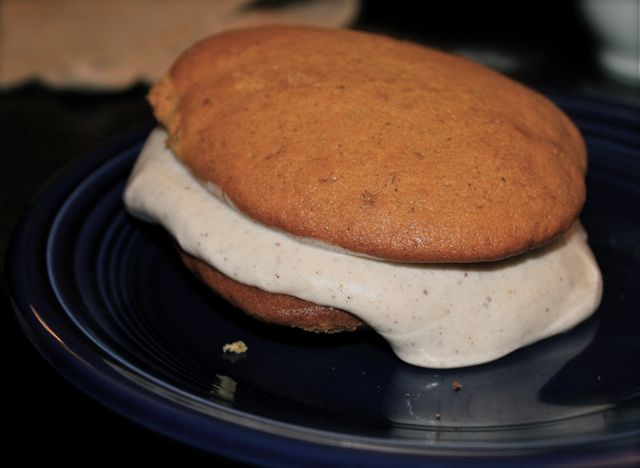 Food photographer I am not

Pumpkin whoopie pies are a labor of love; a multi-step process I only do once or twice a year but oh my goodness are they delicious.

We ate them warm— look at the whoopie spilling out the side— but generally speaking, if you do not have a ravenous horde at your house, despair not. They’re even better the next day.

Whoopies are essentially a frosting sandwiched between two cookie-sized cakes, and they are indigenous to Lancaster County (Pennsylvania Dutch country). Most traditional recipes call for lard or shortening in the filling, which probably helps it from melting all over your plate when warm-from-the-oven but I prefer the cream cheese, thankyouverymuchly.

It has come to my attention that the state of Maine is trying to make whoopie pies their official state dessert, to which I say: step off, Maine. Keep your dang hands off my whoopie pies. You’ve got lobsters and wild blueberries, don’t be greedy.

Local peeps, if you agree that Maine is committing an outrageous act of “confectionary larceny,” you can sign the Save Our Whoopie petition here. 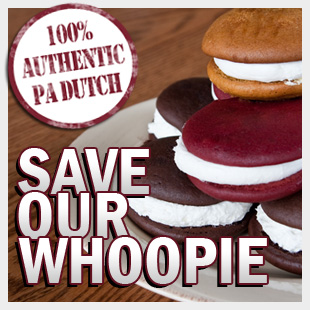 That’s right, local whoopie pride!
Can I get a whoop whoop?

Watchoo got cookin’, good lookin’?
Leave me links for more deliciousness to try.