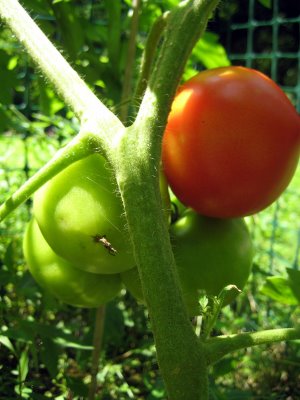 I was not designed to be forced.

I will breathe after my own fashion.

Let us see who is the strongest.

-Henry David Thoreau,
On the Duty of Civil Disobedience

Actually, I’m not even suburban, I’m really borderline rural, but that’s beyond the point.

Some people I’ve never heard of before, the Dervaes family in Pasadena, has trademarked the phrases “urban homestead” and “urban homesteading,” and apparently going after bloggers who use the terms.

In addition to URBAN HOMESTEADING® and URBAN HOMESTEAD®, the terms PATH TO FREEDOM®, HOMEGROWN REVOLUTION®, and FREEDOM GARDENS® have been claimed by Dervaes trademark machine.

Now, see, I was under the impression that these were common terms, going back to war effort Victory Gardens. I thought it was part of Michelle Obama’s healthy eating initiative. I thought it was an umbrella that, historically, communities had formed under.

Why would the Dervaes seek to take that umbrella away?

It doesn’t make any sense to me. Bloggers who literally wrote the book on The Urban Homestead, who were the inspiration for many to build themselves a self-sustainable lifestyle— why would they work to disenfranchise those they had inspired in the first place? Those who stand together and share their experiences in an effort to make the world better?

What precisely is an urban homestead, anyway? According to Wikipedia:

“an urban homestead is a household that produces a significant part of the food, including produce and livestock, consumed by its residents. This is typically associated with residents’ desire to live in a more environmentally conscious manner.”

Aspects of urban homesteading include:

Ruh-roh. My husband hasn’t allowed me my chickens or goats yet, but we’ve got that worm farm. We garden as many herbs and vegetables as the deer will leave for us to harvest. We reuse and repair like our lives and wallets depend on it. We recycle, upcycle, and make ourselves. I’m still a little scared by canning but we do plenty of freezing. And we’re double-dealing with the composting; in addition to the worm bin we’ve got a straight-up compost heap happening in the backyard.

So, it looks like we fall under the umbrella of the (sub)urban homestead. Are we in trouble?

Of course not, they can’t trademark our way of life. All they can do is try to take away our efforts to align ourselves with a community that values the same ethic. You can be an Urban Homesteader, you’re just not allowed to SAY you’re one without giving credit to the Dervaes, even if you’re seeking to align yourself with a movement that began decades before.

They’ve very generously (that’s sarcasm, folks) mentioned that formerly urban homesteaders can now brand themselves as Modern Homesteaders, which really burns my britches because that’s not what we are AT ALL. What we are is trying to relearn the ways generations before us lived, to fit the skills and environmental responsibility and independence and connection to the land of times gone by to the reality of the world we live in now. That’s, like, the opposite of modern. It’s retro.

ONLY IT’S NOT. It’s a bunch of BS, and you can quote me on that.

Do you consider yourself an Urban Homesteader? Can a lifestyle be trademarked?

Let me know if you’ve written about this today, as it’s the Urban Homesteaders Day of Action. I’d love to hear your take.