You are here: Home / Everything Else / Seven for Saturday: News You Can Use 4/2 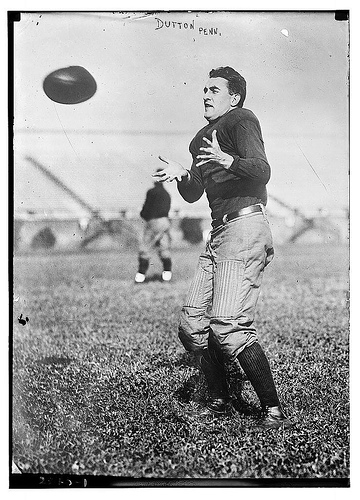 I think you enjoy the game more if you don’t know the rules.
— Jonathan Davies

So today officially marks my crossing the line to Soccer Mom. Usually my kids just sign up for winter sports; I always figured that we get out enough in warmer weather to get them suitably exercised. However, it was brought to my attention that Organized Sports Build Character and You Are Depriving Your Children of a Proper Childhood, so I forked over some $150 in fees, $45 in jerseys, $175 in cleats and mouthguards and shinguards, for the privilege of giving up 5 hours during the week for practices, plus pretty much my whole Saturday (9:15am, 11:15am, 2pm, and the field is 20 minutes away). With that investment, however, I will be giving up my free time long into the future, because you better believe they will wear those cleats until they fall all to pieces. (The cleats, not the children.)

I’m a little terrified because Maverick opted to sign up for football, a sport that I only know enough about to enjoy watching on the TV, and the coach emailed a playbook of some 20+ plays for him to learn before his first game today. I sort of hate the way our sport culture is set up so you can’t just dive into new sports as you please; at 10 he is very likely behind the skill level of the other kids.  So any good thoughts you can send my way would be much appreciated.

And now for the links:

“NASA and Boeing are finding that recent graduates can technically render in two dimensions but can no longer think in three. Ideal job candidates at these companies must now show they can “think with their hands” by having expertise or a second major in a musical instrument, auto repair, or sculpture. At Stanford, the rediscovery of hands-on learning arose partly from the frustration of engineering, architecture, and design professors who realized that their best students had never taken apart a bicycle or built a model airplane.” Great, great article. Share it with everyone you know.

“Children are inherently exploratory,” Mr. Tulley said. Years ago, he added: “they were only limited by their imaginations. Now, they seem to be limited by parents.” So true. Even in our house, my husband, Mr. Tinkerer himself, won’t allow our son to use his tools without the most intrusive supervision. One year our oldest went to a Boy Scout birdhouse-making clinic… where the adults operated all the saws and hammers. (Maybe people will loosen up once they realize they’re jeopardizing their child’s chances of working for NASA or Boeing?)

OK, so this is a little complicated. Current safety ratings are based on assumptions that kids of a certain age are a certain size, on average. The problem is that kids are now hitting higher weights at younger (shorter) ages, so those ratings aren’t accurate.

Now, crash test dummies simulate actual bodies, meaning that we guesstimate the damage an accident will wreak on the human body based on what damage the dummy accrues. To make the dummy a representation of a human requires a series of crashes DONE on humans, cadavers, so that researchers know precisely how much a body can take.

Which means to make an accurate test dummy for a heavier, smaller child, we first need a number of child cadavers to develop the test dummies. Want to hazard a guess as to how many grieving parents offer up their child’s bodies for these test crashes? My guess would be not a lot.

It’s just one more way child obesity is putting kids at risk, but it’s something I wanted people to think about, too.

“…half of more than 100 water samples taken from the electronic faucets grew Legionella, the type of bacteria that cause Legionnaire’s disease… Only 15 percent of 75 water samples collected from manual faucets did the same.” Um, that’s a real bummer, as I have always championed our automatic faucet as not only keeping people’s germs to themselves, but also helping to conserve water. On the other hand, is Legionnaire’s something you need to worry about in a single-family household vs. a large community building? I’ll have to do more research before I make any changes.

The research of neuroscientists confirms what we knew in our hearts to be true anyway: “This research shows that you will be less irritable, more productive, distracted less often, and able to process information better with an uncluttered and organized home and office.” My zeal for achieving zen house has been renewed.

“In seven of the largest cities around the country, we’re sending out two scooter baristas per every square mile to ensure speedy service. We’ve even made ordering easy with our Mobile Pour app for your smartphone. Simply download it, allow it to pinpoint your location, select your coffee order and keep walking. Your fresh, hot Starbucks brew will be in your hands before you can say abra-arabica.” I am frankly speechless in the face of such genius. How many times have you said, “I wish someone would bring me coffee?” Snaps to Starbucks for making it happen.

This week’s shameless self-promotion. I don’t know when we decided that Jim Carrey is stellar entertainment for kids, but he’s like the Grinch who stole children’s literature. How many childhood favorites are we gonna let him mess up before someone puts a stop to it?

Bonus Video (RSS readers may need to click through):

I’ve put this on this blog & other blogs before, and my brother just posted it on Facebook earlier this week. I recommend listening with your eyes shut, but that’s up to you. One of the best lists of advice out there… and it makes me cry every time.