You are here: Home / Fitness, Health, Happiness / Hips Don’t Lie: when apples & pears are bad for you 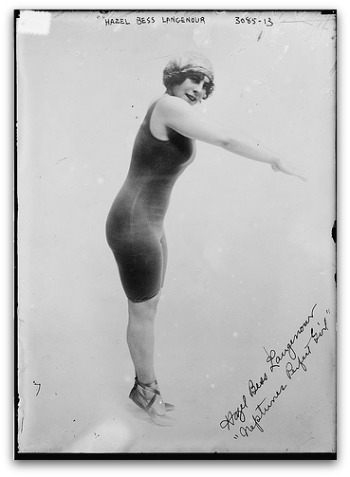 I went for a yearly gyno check-up last week, which meant my yearly step-up onto the scale.

I won’t name the number, because if I did people would instantly get all up in my grill because it’s not a bad number for my height. My BMI is perfectly normal.

I’m 12 pounds off the heaviest I’ve ever been. At 9 months pregnant. With what turned out to be a 9.5 pound baby.

That made me want to vomit all over the nurse’s shoes and I was seriously very grumpy for the rest of the day, in spite of her cheerily chirping at me that I’m “doing so good! Most people gain A LOT of weight when they’re on the Depo!”

A bunch of my blogging friends are participating in a campaign to lose 15 pounds by the time of the Type-A conference, which I considered joining. But I’m already kinda bummed about not attending, and I don’t relish the constant reminder. And once I stopped to think rationally about it all, I realized I don’t really need to lose 15 pounds.

If I lost 15 pounds, I’d only weigh 10 pounds more than my 13 year old son. And that seems sort of ridiculous to me. I have no desire to weigh what I did as a teenager. Let’s be real: I’m not a teenager anymore, and I’m fine with that.

We live in a culture that’s so intensely focused on weight, not health. We learn how to count calories but not how to listen to our bodies. Our reality tv shows us how to combat obesity and rewards people for shedding tens of pounds, but for many of us, that’s not the problem we face. Our needs are different.

I just want to be healthy. I want to feel better when I wake up in the morning, to feel better about my body. I want to maximize the odds that I’ll do the electric slide at my son’s wedding and be able to take my grandkids hiking.

I’m not fat, but I have some extra inches that are not gonna look pretty in a bathing suit in a few short weeks (sorry, all those who will have to bear witness). Hips don’t lie: my body is not as healthy as it should be. Even if you’re not overweight, carrying your excess fat around your belly and hips (apple or pear shape) is an indicator of heightened risk for heart disease and diabetes. It’s also linked to early death and triples the risk of heart attack.

I also get short of breath when I have to run for any distance, I’m tired all. the. time. I’m irritable and I just feel generally despondent and crappy. I know why. I’ve just been putting off fixing it.

Well, here we go. I’m fixing it. I’m telling you about it because that makes me more accountable, but also because I want everyone to consider that just not being overweight is not the same as being healthy. And as parents, being healthy is one of the most responsible things we can do: to model a good example for our children, and to help ensure that we will continue to be there for them.

I know it’s not hard; the hard part is getting the momentum started. Will you help push me?

Eight No-Fuss, Easy-Peasy Steps to a Healthy Me

Lack of activity destroys the good condition of every human being,

while movement and methodical physical exercise save it and preserve it.

Apparently, sitting is killing me.

Like most people, I have a desk job. I work from home, so the work “desk” has a little more leeway— sometimes an actual desk, sometimes the dining room table, sometimes a blanket in the sun, sometimes a lap desk on the couch or in bed. And then, as a hobby, I research and write things for blogs.

“Sitting 6+ hrs per day makes you up to 40% likelier to die within 15 years than someone who sits less than 3. Even if you exercise.“

Soooooo…. I’ve been more careful about taking breaks. And stretching. And trying to leave the house sometimes. And I guess I’ll give the “standing desk” a try.

I’m constantly doing eleventy billion things at once. My brain is overstuffed, overloaded, overheated and not functioning very well by Friday afternoons. I don’t sleep very much (five hours on a good night) and then I waste my precious weekend mornings catching up on sleep (unless we have an early soccer game). The chronically sleep-deprived consume, on average, an extra 300 calories a day; I know that’s true for me as I chug an extra Pepsi or two to keep me going in the late afternoon. Also, those who eat later and go to bed later tend to weigh more.

I’m trying to shut down a bit earlier, let my brain unwind, and get more sleep. The goal is seven hours a night.

I believe that water is the only drink for a wise man.
-Henry David Thoreau

I’m pretty sure I’m chronically dehydrated and that’s part of why I feel like crap.

Coffee and soda don’t really count, either; someone recently pointed out to me that the outside of your body doesn’t get clean if you shower in Pepsi. Ouch. Point taken. Drinking lots of water.

Diets are for people who are thick and tired of it.
– Jacob Braude

I actually eat a pretty healthy diet. The problem, I’ve realized, is that when I get hungry I’ll look for something and my instinct is to grab something snacky. But I’ll resist the urge to eat something processed— which is good— and instead eat nothing, which is bad.

I also tend to skip breakfast, and sometimes I get behind with work and I miss lunch. And then I eat a LOT at dinner. Bad habits, no good for long-term energy.

I’m hoping those earlier dinners & earlier bedtimes will prompt me to be hungry for breakfast, which should balance things out more evenly.

Those who think they have not time for bodily exercise
will sooner or later have to find time for illness.
-Edward Stanley

The result of this lack of long-term energy is, when I get a spare hour I’d rather get a nap in, than go get some exercise. Those spare hours are laughably few and far-between, anyway. I need to figure out a way to schedule time for exercise and get it on the calendar.

To that end, I sent my neighbor (a personal trainer at my local Y) an email asking if she can schedule me a time to get re-acquainted with the resistance machines. She teaches Pilates and spin class too, and I know full well she’s going to get on my ass about attending classes. That’s why I emailed her directly, rather than just go through the lady at the front desk.

I go to nature to be soothed and healed,
and to have my senses put in order.
-John Burroughs

I’m so happy it’s spring. I’m so relieved to get out, I can’t wait to get hiking. I think I might get a bike so I can bike with the older kids. I feel so much better when I’m outside and I need to just do it more.

I wrote tons about the health benefits of nature here.

Now water can flow or it can crash. Be water, my friend. ~
Bruce Lee

This quote has meaning for me in two ways.

To cease smoking is the easiest thing I ever did.

I ought to know because I’ve done it a thousand times.

I left this until last because I dread it most. I huffed my first stinky cig at 11 years old. I’ve quit several times for over a year each time. I quit for almost 2 years and then started back up full-steam when my dad died; kicked it again and started back up under the strain of de facto single motherhood when Jeff took to bed for months at a time with chronic pain and fatigue (which has since been diagnosed and treated).

I smoke two a day; one after dinner and one before bed. I gag every time, and I know it’s because my body is rejecting it. It’s not a physical addiction or chemical dependence, at all. It’s the psychological need to take a break, to transition from one stage of the day to another. I don’t know how I will substitute those few minutes of quiet. But I know I really need to.

You must do the things you think you cannot do.
Eleanor Roosevelt

Oh, god, I can’t even believe I am typing this. But I think I’m going to take swimming lessons.

The thought ties my stomach in knots, but swimming is supposed to be such a whole body- low impact workout, and swimming laps strikes me as such a good way to get that solitude I crave. I’m scared. Hold me.

It sounds so easy, doesn’t it? Small steps, big impact; where have we heard that before?

Are you trying to lose weight, trim inches or just live healthier?

Tell me all about it. Please. (If you’re a blogger, please feel free to leave a link.)

** The photo above is of Hazel B. Laugenour, “Neptune’s Perfect Girl,” 19yo college student & first woman to swim across the San Francisco Bay, in 1911. This is the picture of health. **

** But this is not. Lisa brought up Before & After Pictures, so I swallowed my pride and had Jeff take some Befores. I originally had on a yoga top, but we agreed that it hid my treetrunk waist too well. I also left the horrible lighting and whatnot alone (Jeff is not the world’s best photographer), figure I want Before to be pretty bad, right? Makes it easier to see some PROGRESS! ** 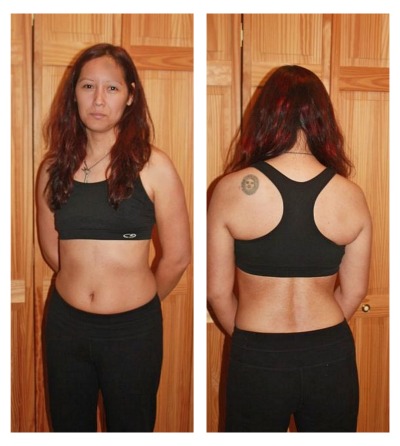