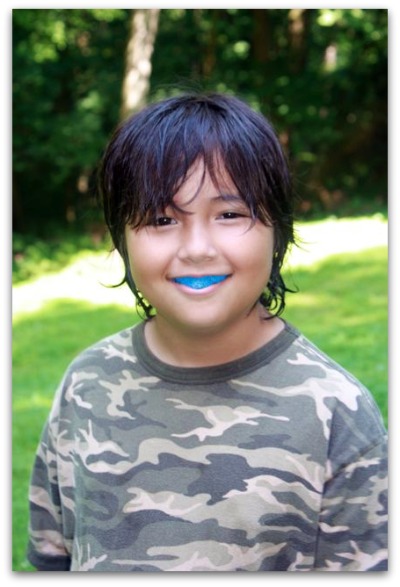 We do have a zeal for laughter in most situations,
give or take a dentist.
-Joseph Heller

Maverick played flag football this spring and one of his least favorite things about it was the mouth guard.

I asked him to describe his old mouth guard and he answered:

Does not look comfortable, does it?

The old mouth guard consisted of a giant rubber shield that housed a wax mold that you shaped to your mouth (a ‘boil and bite’). As the season went on, Mav managed to wear down the wax mold so it didn’t fit correctly and he must have been consuming the bits. (I’m gagging as I write this.) As soon as his last game was over he asked me if he could throw it away, holding it out for me to see, and I was soooo tremendously grossed out.

In addition, he had to take the thing out of his mouth every time he wanted a drink of water (which was often, the kid is playing football out in the sun). I can’t tell you how many times he dropped it on the muddy field while gulping down some water. And then? Stuck it back in his mouth after only a quick rinse (since he wanted to conserve water). Doesn’t matter too much, I guess, since his hands were filthy anyway from the dirt and the ball.

I’m so pleased to report that THERE IS A BETTER WAY.

I was sent a Protech Dent Mouth Guard for Maverick to try out and oh, my god. It’s so much better. I love when a product totally takes all your complaints about a product and fixes them. Awesome.

The mouth guard is made of a thin, perforated material (no more disgusting sucking up of drool! I’m gagging again!). 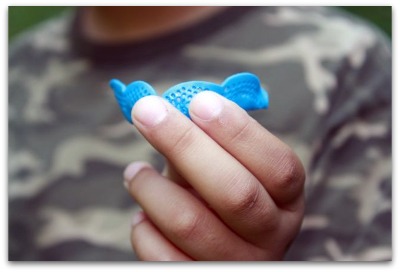 Since it’s so thin, Mav can talk and drink without having to take the guard out of his mouth, so no dirty germy mouth. And I’m going to have to say it must be pretty comfortable. After we took our pictures, Mav went inside and was messing around on the computer— ten minutes later I realized he still had the mouth guard in. 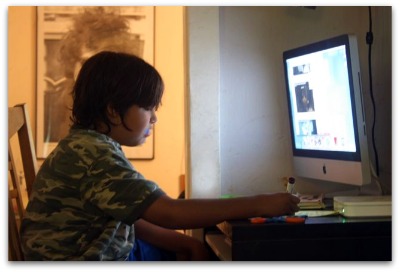 writing his review of the mouth guard

“The thing I love about this mouthguard is that it is very comfortable, strong, and you don’t sound like an idiot when talking. I really wish I had had this before.” 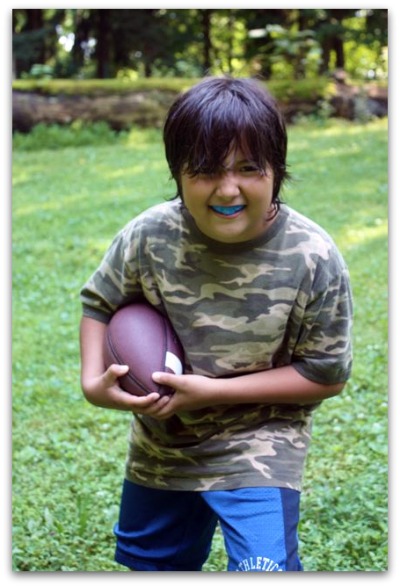 Maverick has this weird shark tooth thing going on, where the new tooth is coming in but the old one hasn’t given up the fight yet. So the mouth guard, being forced up and over to cover a tooth normal people don’t have, doesn’t quite extend as far over the molars as I would like. Happily, the Protech Dent Mouth Guard is easily remolded, so we can do it over once that tooth comes back out. Someday. Hopefully really soon.

The molding process seemed intimidating, as it was my first time ever having to do this, but was actually crazy easy. You just heat up some water; remove it from the heat when it’s good and hot but before it starts boiling; drop the mouth guard in until it’s soft (just a few seconds). Take it out with a fork, being careful not to let the thing fold over and stick to itself. There’s a line where your middle front teeth should go; then you just smooth it over the front of the teeth, shut your mouth, and suck everything into place. Our first try was off because we had to navigate Mav’s shark tooth, but he was able to go through the process himself after the first one (I really love how easy it was to do a do-over). It took 3 tries to get the fit perfect. I recommend taking the hot water into the bathroom so you can see what you’re doing in the mirror.

Jeez, you don’t have to take my word for it. Or even Maverick’s. Thanks to Mom Spark and Protech, we’re giving a child mouth guard (ages 6-10) away to one lucky kid. Just let me know in a comment below who’d be getting it and what sport(s) they play for your chance to win 🙂 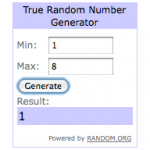 UPDATE: Congrats to Valerie!
Comment #1 was selected via random.org.

Disclosure: this review was made possible by Mom Spark Media. Thoughts are my own. Well, except for Maverick’s.