You are here: Home / Family, Parenting / I Can Haz Saint Bernard Puppy? 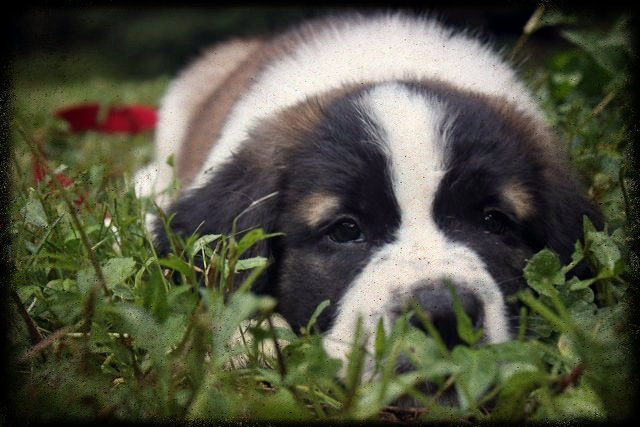 from Falling in Love is Like Owning a Dog

…On cold winter nights, love is warm.
It lies between you and lives and breathes
and makes funny noises.
Love wakes you up all hours of the night with its needs.
It needs to be fed so it will grow and stay healthy.

Love doesn’t like being left alone for long.
But come home and love is always happy to see you.
It may break a few things accidentally in its passion for life,
but you can never be mad at love for long.

Love makes messes.
Love leaves you little surprises here and there.
Love needs lots of cleaning up after.
Sometimes you just want to get love fixed.
Sometimes you want to roll up a piece of newspaper
and swat love on the nose,
not so much to cause pain,
just to let love know Don’t you ever do that again!…

We have a new family member.

Allow me to introduce… 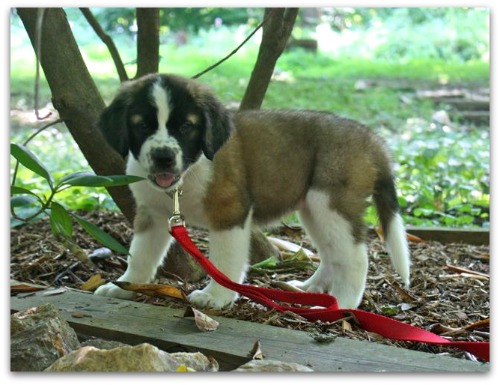 Casino for luck, and because the boys and I just watched the original Rat Pack Ocean’s Eleven, followed by the George Clooney version. Also, it just sort of rolls off the tongue.

Karma was named Athena when she came to us. She was one of a litter of seven… and she was born a full 36 hours after the other six.

A miracle baby. She also has six toes on one of her hind feet. 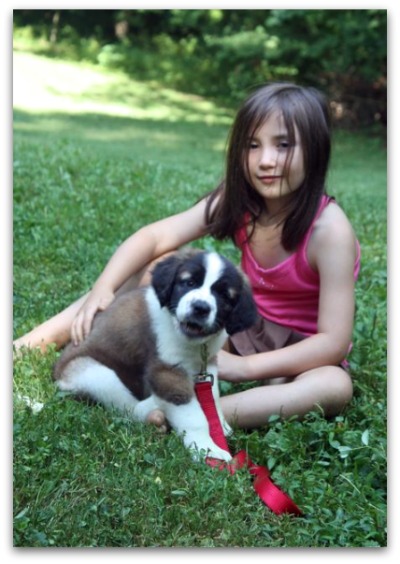 “The Saint Bernard probably has its roots in the Roman Molossian dogs, but it wasn’t until between 1660 and 1670 that the breed developed into the magnificent dog responsible for saving so many lives. Around this time, the first of these large dogs arrived at the St. Bernard Hospice, a refuge for travelers crossing between Switzerland and Italy. The Saint Bernards originally came to help pull carts and turn spits and may have also functioned as watchdogs or companions, but the monks soon found them invaluable pathfinders through the deep snow. The dogs were adept at locating lost travelers. When a dog found a person, it would lick the person’s face and lie beside him, thus reviving and warming the person. The dogs continued to serve in this invaluable role for three centuries, saving over 2,000 lives.” 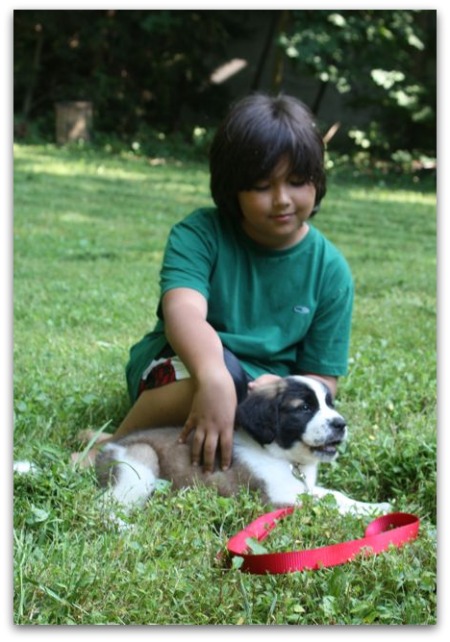 The name “Saint Bernard” wasn’t in widespread use for this breed until mid-19th century. Before then, they were “Saint Dogs”, “Noble Steeds”, “Alpenmastiff”, or “Barry Dogs.”

Barry was the most famous rescue dog at the St. Bernard Hospice. He reportedly saved somewhere between 40 and 100 lives. There’s a monument to Barry in the Cimetière des Chiens, and his body was preserved in the Natural History Museum in Berne. 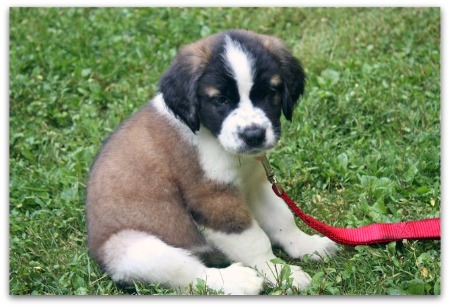 Saint St. Bernard, by the way, was the first Cistercian monk placed on the calendar of saints. Pope Pius VIII gave him the title “Doctor of the Church.”

Some concerned citizens were wondering how The Dogness took to the puppy. Jimmy, like me, likes his personal space and doesn’t like when things get overexcited or unruly. He’s been known to steal and hide the ball when he thinks a game of soccer has got out of hand. 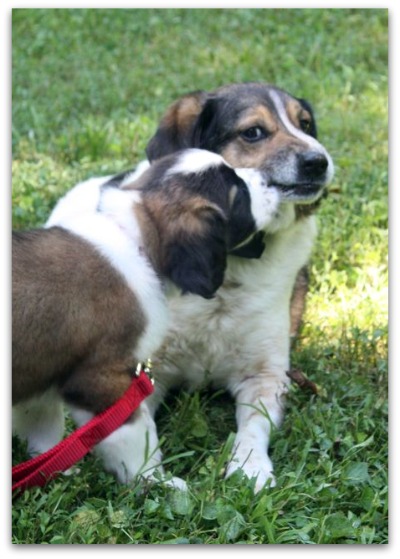 Look at the disdain on that face.

The puppy is pretty low-key as puppies go, and Jimmy has decided she’s not too horrible.

He’s permitted a few kisses on the cheek, but I don’t think he’s up for sharing his doggy bed yet. 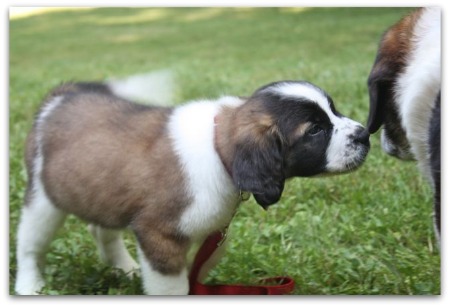 And… that’s what I did today.

Now tell me something completely crazy that you’ve done lately 🙂 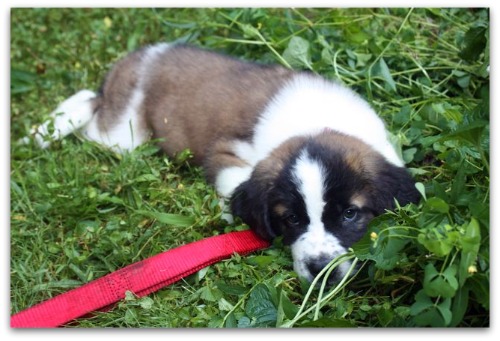 You cannot resist the cuteness.