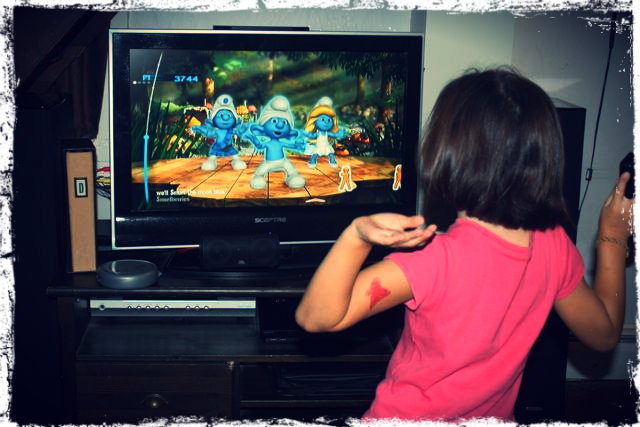 Seriously, did you ever think the Smurfs would make a comeback?

I’m not certain that I ever watched the Smurfs on TV on purpose as a kid, but back in olden times we only had like six channels and only three of those had cartoons on Saturday mornings. So in between, I don’t know, Care Bears and Pac-Man you were stuck with the Smurfs, and then you had the theme song earwormed all day. Am I right?

When we were in Atlantic City for #FamFriendlyAC Cass received a big swag bag that had a bunch of movie promo posters in it, and one of those was the Smurfs. And I thought, really? Did they need to bring the Smurfs back?

But Cass was hooked, and Smurf fever only intensified when she saw the trailer at Mr. Popper’s Penguins.

She started watching old episodes on YouTube. Reading old Smurf comics online. Wearing Smurfs zinc oxide at the beach. We already know what she’s going to be for Halloween… can you guess? Hint: she’s three apples high and has Goldie Hawn hair.

We tried to Build-a-Bear a Smurf using the coupon the store sent her for her birthday, and people. SMURFS HAD SOLD OUT.

So when we opened a package from Ubisoft containing Smurf Dance Party for the Wii… suffice it to say I was deafened with screeches of joy, and much impromptu dancing was to be had in the land. 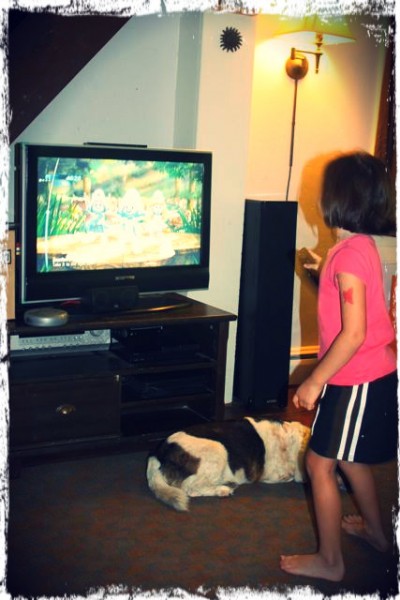 I am a HUGE Just Dance fan and kick royal heinie on the Michael Jackson Experience, so I squared my shoulders and put my doubts about the re-emergence of the Smurfs away. For the moment.

The selection of songs is HILARIOUS. Cass loves the songs and sings along, and I’m endlessly amused by her rocking out to songs like Mr. Smurftastic (Shaggy’s “Mr. Bombastic”), The Noisy Smurf (a rendition of Bjork’s “It’s Oh, So, Quiet”), Walk This Way/Smurf This Way, Duck Sauce’s Barbra Streisand, and Who Let the Smurfs Out.

The dancing is not as precisely measured or as vigorous as the regular Just Dance or Michael Jackson versions, which tend to make me actually break a sweat and have sore arms (I take my Wii dancing seriously). That’s fine, since clearly the game is targeted to younger kids, and it’s nice to have a fairly level playing field. Cass played against her Aunt Jessi and I think they both “won” some songs. 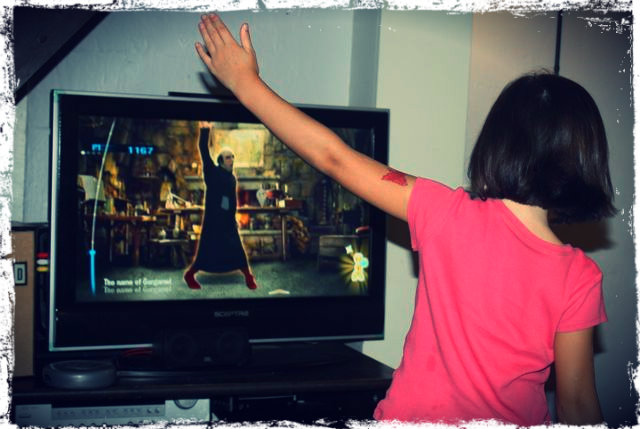 If I’m being very honest, I have to say that I find Papa Smurf thrusting and popping his hips to be really weird to watch, but Gargamel makes me laugh out loud every. single. time. Jeff played  “Who Let the Smurfs Out” and I was in TEARS.

Cassie’s favorite songs are the ones where Smurfette leads (groan), especially “Everybody Up” (I tried to track down who sings the original but I honestly still don’t know). 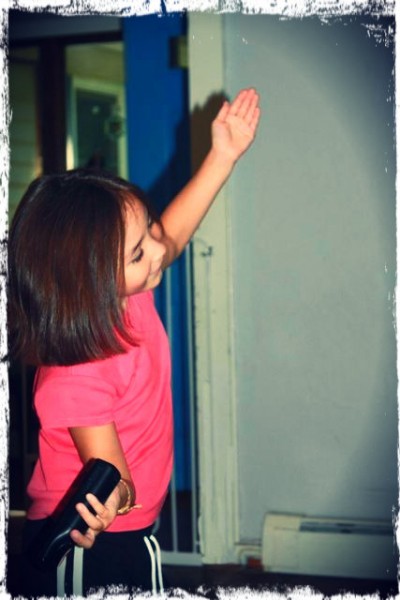 All in all, it’s a good time and a great addition to the Elton Family Saturday Game Night. It’s simple enough for the young crowd and funny enough for the older crowd, gets you up and dancing, and hasn’t caused any earworm damage yet.

One of those games, I daresay, that one might call “perfect for the whole family.”

I might even be convinced to watch the movie… maybe.

NOTE: There is video of Cass playing embedded. If you’re an email or RSS subscriber you may need to click through to see it.

You can buy The Smurfs Dance Party

at Amazon, if you are so inclined. (If you buy through that link I make a few pennies on the dollar towards a new camera lens.)

Thank you to Ubisoft for sponsoring this UbiChamps blog post. Please click here to learn more about Ubisoft. I was selected for this sponsorship by the Clever Girls Collective. All opinions are my own.