You are here: Home / Fitness, Health, Happiness / I Ran Dirty Girl Atlanta! And Another 5K the Next Day! #PROOF 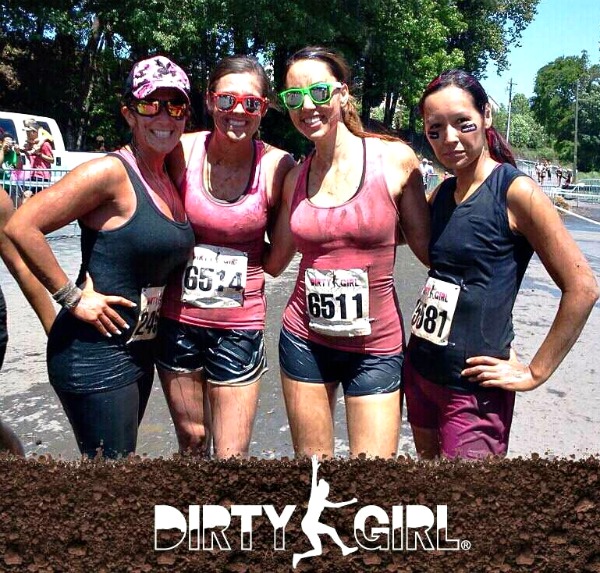 -If there is anyone among you who does not recognize this quote,
you are SO VERY LUCKY.
(It’s from Dora the Explorer.)

I overheard several women singing the “We did it” song at the Dirty Girl race after completing an obstacle, and really it was fitting: the rope climbs, tire runs, and mud crawls were pretty much exactly what Dora has to go through on a daily basis to get any blessed thing done.

She never gets muddy though, and that’s where the similarity ends, because we ran that course with every intention of getting as dirty as possible.

I flew out to Atlanta Friday night, staying at the Hyatt Regency Suites NW in Marietta, GA. (As my taxicab driver scolded me, it is VERY IMPORTANT to say the whole name or you might end up in the wrong place. Don’t ask me what prompted him to tell me that.)

I had already encountered the worst possible departure scenario: Cassidy’s school calling me and asking if I could come pick her poor puking self up. The resulting press for time meant I didn’t eat anything Friday until I got to my hotel; totally an ideal pre-run day, right? Right.

To be honest, I had that “I hung out with a sick kid all day” paranoia and didn’t really want to eat anything, but ordered room service anyway. 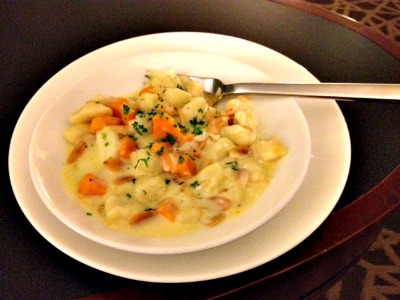 Potato gnocchi with feta, pine nuts and roasted squash. Oh my freaking yum. So good, but so filling; I got maybe a third through it before I felt like I was done. But I soldiered on and ate the whole plateful because I figured I needed it. (I keep thinking I want to figure out homemade gnocchi, but then again it’s one of my favorite dishes to order when out. Don’t want to ruin that, you know?)

The next morning I ate my own weight in cantaloupe and honeydew (Atlanta, why are your melons so much tastier than around here?) and was picked up by my FitFluential boss lady, Miss Kelly Olexa. Onsite, we found Madeline from Food, Fit and Family, Maria of A Life to Bragg About, Victoria of Victoria Runs and Carissa of Fit 2 Flex— every one of those ladies is awesome and down to earth and you should just go subscribe to their blogs right now.

The sun was hella hot (the high was 85 degrees that day I think) and the race untimed, so we just savored our time out on the course without feeling rushed. The obstacles were very manageable; we skipped one only because there were so many people waiting ahead of us. I was a little apprehensive about going over the wall, and climbing up and over the rope wall, as I’m clumsy and not so big on heights, but aside from that panicky moment when you swing your leg over and can’t immediately find a foothold it was fine.

It was fun. Really, really fun. No pressure. Rejuvenating. A bonding experience.

You should go do one.

(Local peeps, the Scranton run is this Saturday. Just sayin’.) 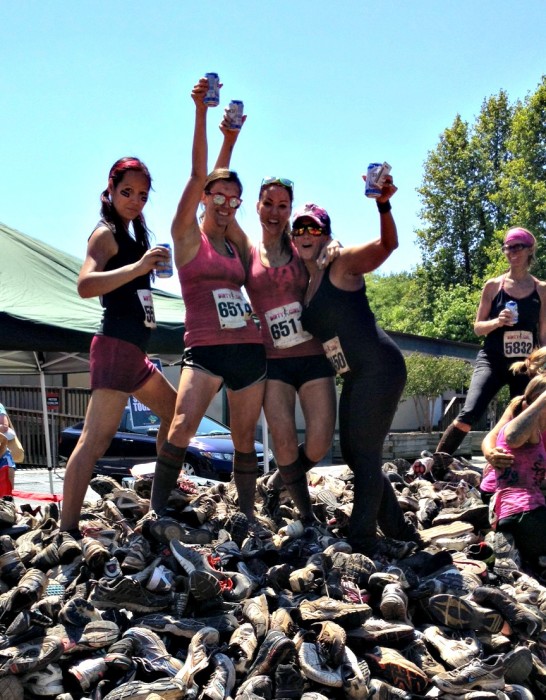 Some tips for running Dirty Girl:

1. Get there early. I’d say two hours. There are lines. Lines to sign in, lines if you want to buy merch (and you will, it’s cute; the top I bought is cut small FYI), lines to check your bag.

2. Wear sunscreen. Liberally. There were some unfortunate tan lines acquired that day.

3. If you get there later in the day, don’t assume the on-site lot is full. Ideally you want to park there so you can skip the checking of your bag. People are leaving throughout the day. Check the lot.

4. Bring food. I didn’t really see any offered. Kelly and I hit up Krystal’s afterwards and I slammed some burgers that, while delicious, I regretted while sitting in the airport.

5. Don’t stress the time. The obstacles get backed up. This is not a run to worry about breaking any time records.

6. Bring a camera and take tons of pictures. I didn’t, because I was afraid it would get dropped/lost/broken. I meant to buy one of those disposable jobs and put it into a ziploc bag, and I wish I did. Many of the obstacles are far enough away that most spectators won’t bother, and I really regret not getting those shots. If I had it to do again, I’d bring the camera-in-a-bag and thread a ribbon through, then attach it to my wrist or something. My only real regret about this race is the lack of photos; I’m tempted to run it again just to properly document it.

7. Wear running gear. And underoos. I hemmed and hawed about whether I wanted to wear my new Adidas running outfit, or a tank top and shorts I wouldn’t mind staining. The running outfit tossed off the mud like water off a duck’s back. While I heard a lot of people complaining about chafing, I was comfortable. And, keep in mind the walls and crawls: if you’re at all modest I’d suggest some underthings.

8. Wear “throwaway” sneaks. I wore my Patagonias (and then left them in Kelly’s car… hope they survive) because I was worried my tired Adidas didn’t have enough tread. They would have been fine, and then I could have left them to be donated.

9. Don’t expect much of your post-race “adult beverage.” It may vary from venue to venue, but for us it was Busch. In cans. It was cold, which was good, but it was basically beer-flavored water. I am a beer snob and was kind of disappointed. But then, I probably didn’t need to be drinking in the hot sun before hanging out in an airport for 4 hours.

Bonus: Have a ball 🙂
Not really a tip because you won’t be able to help yourself.

After the run and scarfing Krystal’s burgers, Kelly dropped me off at the airport where I entertained myself for nearly five hours, flew to Philly, got home around 1:00 am…

and then I ran the Western Family YMCA Healthy Kids Day 5K the next morning with Jake! 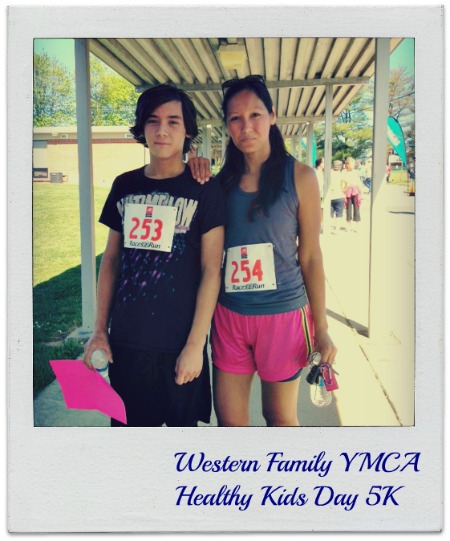 I didn’t pre-register because I honestly didn’t know if I’d be up to it after running/traveling, so they had run out of t-shirts (rather snottily saying, “Next time pre-register.” But whatever). Given that I had mentally justified the cost by saying “at least I get a t-shirt,” I was vaguely irritated that they didn’t tell me they were out before I paid my money, but again, whatever. I’m happy to support my YMCA, they’ve had a huge impact on my family. Immeasurable, really.

I kept pace for the first half just ahead of a huge line of police cadets who sang the whole time. It was sort of awesome.

The halfway point had a water station, and I didn’t want to get stuck carrying the cup the whole way back (I was already carrying my phone and headphones and keys, and have a mental barrier against just chucking the cup), so I stopped for a minute to drink and throw the cup away. Which then put me just behind the cadets. In hindsight, I should have sped up a bit to finish ahead of them, as that would have made my overall finish standings like 20 places higher.

Jake finished 4th in his age division and 39th overall, running 28 minutes flat in Converse with zero training, a 9:02 mile pace. Ah, to be 14 again.

He also ran a 5:45 mile yesterday in gym class for the Presidential Fitness Award. He’s beasty.

This is us just after I finished: 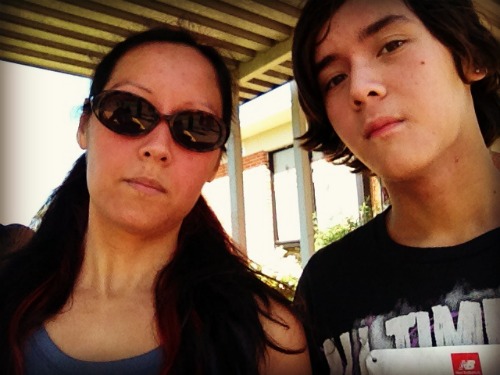 We think we’re badass. Wish we had t-shirts, though.

Sorry for all the self-congratulatory crowing.

But hellz bellz, we did it. I’m proud of us.

Disclosure: I’m the VP of Community over at FitFluential and Dirty Girl is a client. FitFluential brought me to Atlanta for the run. As always, all long-winded opinions are my own.