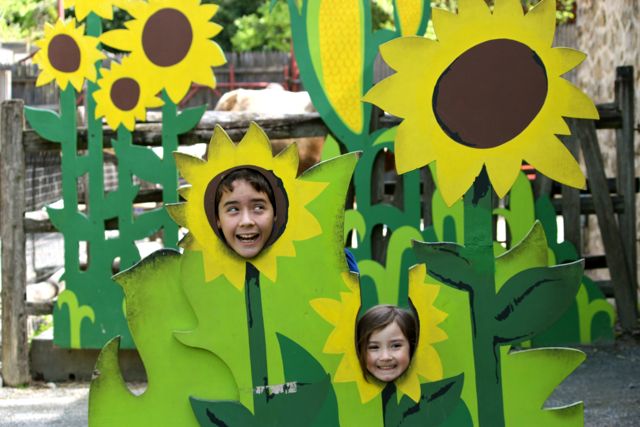 My own prescription for health is less paperwork
and more running barefoot through the grass.

When Jake was young he couldn’t do a whole lot of running through the grass. The poor kid was allergic to the entire outdoors, it seemed; his breathing would get all stuffy and congested, he would sneeze over and over again, his skin would rash up and thicken like an alligator’s, he would be all red around the eyes from rubbing them constantly.

He gets mad when I talk about it, saying that I’m always exaggerating his illnesses, and to him the memories are probably more of the running-through-grass variety than the results of it. But as a parent, it’s so hard to see your kids struggling to breathe; to be constantly, idling scratching, to the point where it was such a habit I don’t think he was aware of it.

What linguistic genius
set up the sneeze and wheeze
To rhyme so very perfectly
with the word “allergies”?

It was the worst at night, when his narrowed and raw nasal passageways would wake him up all night long, either because he was having a hard time breathing or because he’d been startled out of sleep by yet another nosebleed. He’d climb into our bed and I’d be kept up by the awful sound of him scratching away, often ripping his skin open in his sleep. 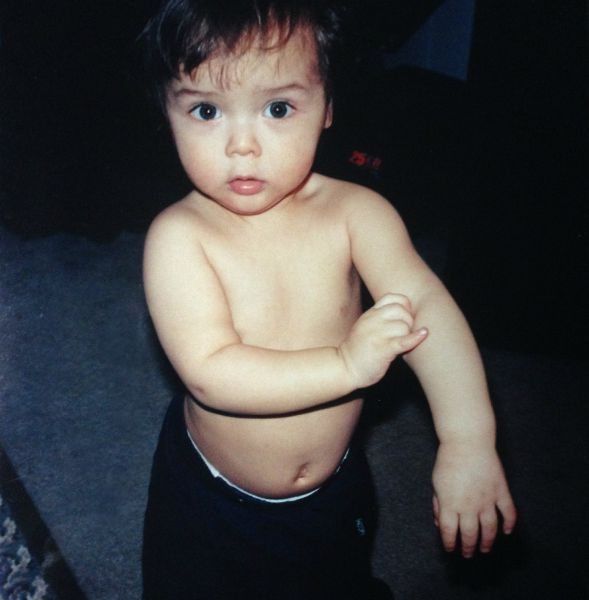 We tried everything out there that claimed to help, that didn’t involve a constant stream of meds. Oatmeal baths, cool showers, fewer showers, goats’ milk lotions (along with a hundred other lotions), black soap, no soap, apple cider vinegar, teas, local honey, and an ongoing process of cutting out and reintroducing foods.

(It’s worth noting that the most effective treatment was making him shower immediately after coming inside for the day, to get rid of whatever pollens and other irritants were on his skin and in his clothes. But that wasn’t enough.) 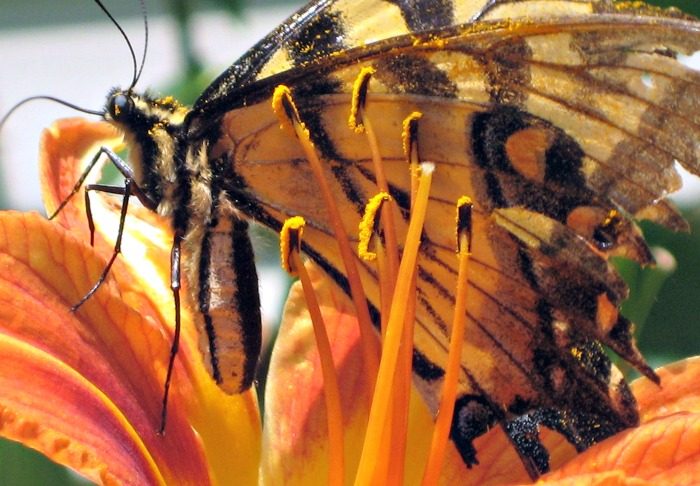 imagine him similarly dusted with pollen

Some things would help for a little while. Some just sort of suppressed some symptoms only to exacerbate others. Since the worst of it happened at night, we had to start giving him a nightly dose of allergy meds to keep him from doing serious damage to his skin while sleeping, and while that helped a lot it came with its own set of problems. Prescription meds were super expensive and some of the warnings for kids were alarming; we tried to save this for more severe flareups. Liquids definitely worked faster and better for Jake, but the sugar in the OTC syrup, which made it easier for the medicine to go down, made it harder for him to go down. Ironic, since we tend to think of allergy meds as being drowsiness inducing. Also, like his father, Jake was sensitive to the food dyes that added color, especially red; they made him hyper.

Eventually a dye-free allergy formula came out, but not every store carried it, and dye-free didn’t expand to other medicines, so we just never gave Jake anything but Tylenol for coughs and colds. 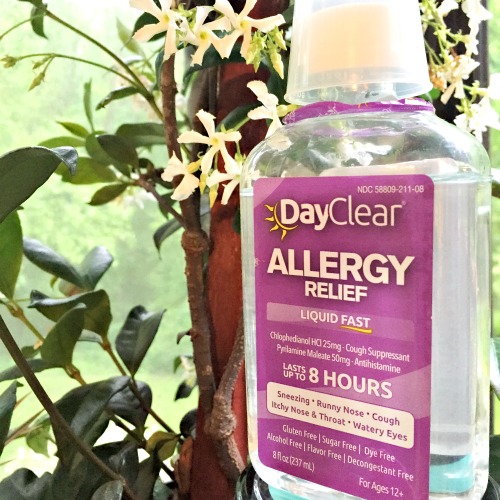 As to diseases, make a habit of two things—
to help, or at least to do no harm.

Odes Mitchell has a similar story. He was already active in the pharmaceutical industry when his son Mason was diagnosed with celiac disease, after several long years of struggling with illness. As Texas natives, the Mitchells were also privy to severe allergy seasons. They had a hard time finding an allergy medicine that alleviated his symptoms, without causing more side effects and symptoms due to his gluten intolerance.

Odes saw this gap in the over-the-counter market and formulated DayClear, a long-awaited solution for those with intolerances, allergies, or diseases that require near-constant vigilance when it comes to ingredients. It’s the stuff you need, without the stuff you don’t want.

This completely clear, non-syrupy line is:

for diabetics and those looking to lower their risk of illness and disease while helping to control cravings, improve energy, and avoid allergens

eliminating the side effects of alcohol intolerance that could include nausea, headaches, flushing, increased heart rate and fainting. Research indicates that cystic fibrosis and fibromyalgia patients may experience intolerance to alcohol and sensitivities to sugar, food colors, and artificial flavors.

Did you know: 80,000 people head to the emergency room due to accidental acetaminophen overdoses?

Most prescription and OTC products contain artificial dyes for no reason other than making them look colorful. Food coloring and artificial dye sensitivity can lead to hyperactivity, lack of attention, sleep problems, stomach and respiratory issues in some adults. 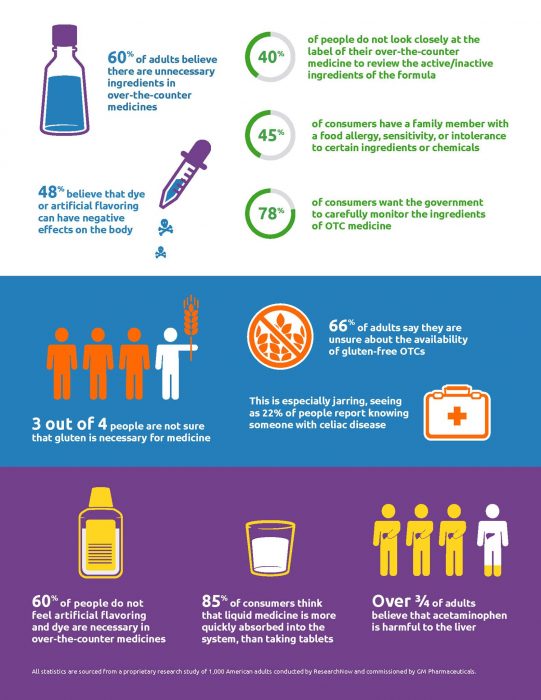 I love stories like this, where people tweak long-standing products and you just have to think: why didn’t anyone think of that before?

Our sample bottle of DayClear made it not even 24 hours before Jake cracked it open. While he has mostly grown out of the worst of his allergy symptoms, he still gets flareups during the spring and fall, and anytime we give the house a deep cleaning. His verdict was that it worked to alleviate his scratchy throat and nose, and that it tasted like medicine, not like medicine-masked-with-cherry-flavor.

DayClear is currently being launched in the northeast states including Connecticut, Massachusetts, Maryland, New York, Rhode Island, Virginia and Delaware— you can find a local store here and save $2 with this coupon. It’s also available nationwide via Amazon. I’ve added a graph of which products treat which symptoms at the end of this post. 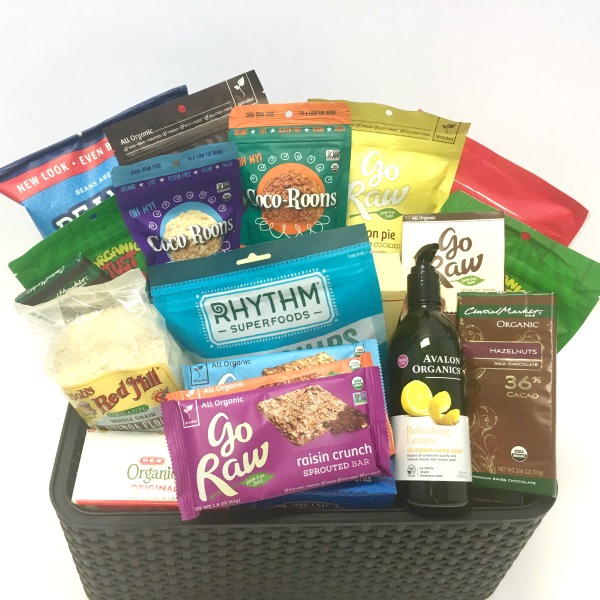 He who takes medicine and neglects to diet wastes the skill of his doctors.

Because I like to really stress that health is about a lot more than just management of symptoms, we’re going to balance out all this talk of allergies and medicines with a bit of healthy indulgences!

DayClear has provided this basket of organic goodies, pictured above and valued at $100, to a lucky simple. green. organic. happy. reader. Enter using the Rafflecopter widget below; you can choose one entry option or as many as you like. 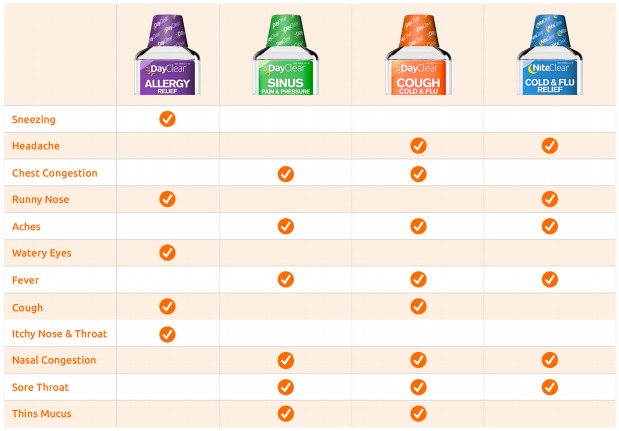 For more info on DayClear’s products, visit their product page.