It’s that time of year! Keep a keen eye and in many parts of the country you’ll see mama deer with their fuzzy fawns. You may also encounter a fawn that appears to be abandoned, and not know how to intervene. Here’s what to do if you find a baby deer. 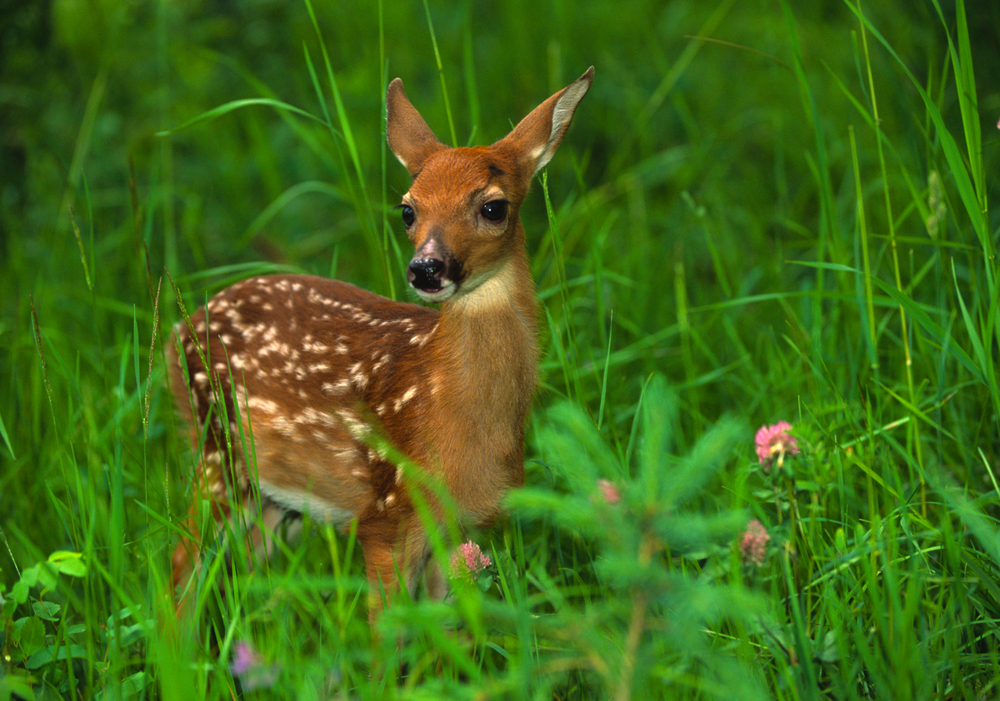 So they walked on together through the wood, Alice with her arms clasped lovingly round the soft neck of the Fawn, till they came out into another open field, and here the Fawn gave a sudden bound into the air, and shook itself free from Alice’s arms. “I’m a Fawn!” it cried out in a voice of delight. “And dear me, you’re a human child!” A sudden look of alarm came into its beautiful brown eyes, and in another moment it had darted away at full speed.

―Lewis Carroll, Through the Looking-Glass

In my area (Delaware/southern Pennsylvania), fawning season peaks somewhere around the last week of May through the first weeks of June. I love seeing the baby deer visiting our yard with their mothers— it seems to usually be two fawns for every mama— and I’m always a little tense about their safety on our windy, rural road where everyone tends to drive too fast.

It’s also the time of year when calls to the Division of Wildlife about abandoned fawns tends to peak, probably because people aren’t aware of certain deer facts and how mother deer take care of their young.

Fawns don’t have a scent when they’re born; it’s an important survival tactic. Their white spots act as camouflage in tall grass. Their mothers will leave them alone as much as possible to protect them from predators, as they are safer on their own than with the mother drawing attention to them (and they’re not able to run away quickly enough to avoid any predators that do happen to notice them).

The fawns will often change their hiding spot on their own. The mother probably isn’t far away though and will find her easily, as fawns do need to feed frequently.

So what do you do if you find a baby deer?

The answer is simple: nothing.

If you touch the fawn, you’ll be marking her with your scent and making her vulnerable.

If you move the fawn, you’re separating her from her mother and possibly damaging their relationship during a critical imprinting period—the baby could very well imprint on a human and this can actually cause the mother to abandon it. (Baby deer start traveling with their mother somewhere around two months of age.)

Unfortunately, deer that are raised by people don’t have a great survival rate upon release. The skills they need in the wild just can’t be taught by humans. And in some spots taking in or attempting to rehabilitate wildlife is illegal: here in PA, there is a fine of up to $1,500 per animal and in most cases the animal will be euthanized. In all cases the animal will be confiscated. And be aware, it violates both state and federal laws to transport wildlife between states.

It’s a bummer for sure, and there’s no shortage of YouTube videos that make befriended wildlife seem like the best thing ever. I want a pet deer or fox or crow as much as anyone (probably more, honestly) but in most scenarios the best decision is to let nature take its course.

Something like a quarter to one half of fawns born every year here in Pennsylvania won’t grow to adulthood. It’s the circle of life. Those deer also play an important part in the ecosystem, and frankly there are more deer than the area can support anyway. Better to become food in a natural manner than growing older and being hit by a car, right? Right. (But here’s what to do if you do hit one.)