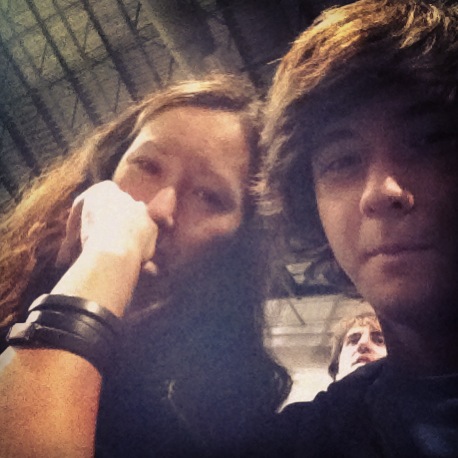 People are crazy and times are strange
I’m locked in tight, I’m out of range
I used to care, but

In 1991 I went to my first Bob Dylan concert. 1991 kicked off what would be called the “Never Ending Tour,” as Dylan has been touring continuously ever since. I saw him every year for almost a decade, some years twice. Some concerts were better than others, but I loved every one: for the songs played, for seeing a legend in action, a piece of musical history; for the company I kept.

Twice in those years I saw Bob Dylan with my father, the only two times he saw him in concert. My father loved Bob Dylan and I grew up on the songs of the outlaw folk singer. My father would leave me notes that said things like “Went to the video store. Will be back in time for dinner. The pump don’t work cause the vandals took the handles.”

I watched the Dylan documentary ‘Don’t Look Back’ until I wore through the tape in the VHS cassette.

The year after my father died I saw Dylan again and he played our favorite song, ‘Don’t Think Twice, It’s Alright.” I cried and cried and cried and I think it was the first time I really, truly accepted that my dad was gone. It’s worth noting that’s the only time I’ve heard Dylan play that song.

In college I wrote a paper about Dylan. It was in theory about the influence he had on modern songwriting, but the part that had meaning for me outlined how Dylan’s lyrics tap into the human consciousness. They may seem nonsensical, but coupled with the music that feels like we’ve heard it before and the intimate nature of his voice— not a lovely voice at all, but so raw and personal, and causing us to lean in and concentrate on the lyric— his songs resonate with something complicated and musical within our souls. That part of us that longs to be a poet, a philosopher, a knower of which way the wind blows.

It always reminds me of the Emerson quote: “Trust thyself: every heart vibrates to that iron string.”

It’s been nearly a decade since I last saw Bob. He has aged a lot in that time, his voice has grown even more rough. His variations on the songs I love made me laugh out loud.

I’m always amazed by how small he is. Given his enormous impact on my life, and the world of music.

Bright lights behind and a cowboy hat on his head mean you can’t take a decent picture of Bob singing on stage, but that’s OK.

He opened with ‘Things Have Changed’ and closed with a brilliant ‘Ballad of a Thin Man.’ In between there was a jaunty, jangly ‘Tangled Up in Blue’ and quiet ‘Visions of Johanna,’ and a bunch of other songs that I didn’t know or only vaguely knew— I stopped obsessively listening to new Dylan albums around the time Jake was born.

When I was 15, I knew every line of every song he sang (my knowledge of the Christian years was a little holey, but he didn’t play any of those). Since then, Dylan has mostly gravitated to a gangster rockabilly type of show but I don’t mind. I overheard a lot of people complaining that he didn’t play his old battle hymns, but come on. He built a career on not giving a crap about what his audience wanted to hear or hoped to see; the man is entitled to play the new songs he cared enough about to record on new albums.

His clothing and dance moves are reminiscent of your grumpy grandpa doing an ironic imitation of Michael Jackson’s ‘Smooth Criminal.’ He didn’t play guitar; when he played he stood behind a piano. But every so often, he’d bust out that harmonica, and oh. my. god. it was sensational. While his voice and frame may reveal his age (72) and the years he’s been on tour, the harmonica is ageless and huge and soaring and reminds you that this is a man who has been making music for over 50 years, made over 30 albums, has been touring continuously for over two decades. He is a force who has touched so many hearts and influenced so many lives.

Is there an artist today that my son will see at 15 and be emotionally affected seeing again with his own 15yo child? Maybe, but I don’t think so. I think Dylan stands alone in that respect.

After the concert my son turned to me and said, “Thanks Mom.” I assume he meant for the cost of the ticket and the tshirt I bought him.

I hope that it was because he understood how much it meant to me to share this with him.

Tonight was important. It was some sort of closing of a circle.

In religion, you have faith that performing certain rituals literally transport you to participate in a sacred time and space.

Do you know what I was smiling at? You wrote down that you were a writer by profession. It sounded to me like the loveliest euphemism I had ever heard.
When was writing ever your profession? It’s never been anything but your religion.

The music of Bob Dylan, in many ways, is my religion.

One day I’ll be gone, but Dylan’s music will bring me closer to my children. As it did and continues to do for the memory of my father. They’ll hear the words and feel the music, and I’ll be there with them. These sorts of connections are important, and far between, and I’m so grateful to have experienced this one.