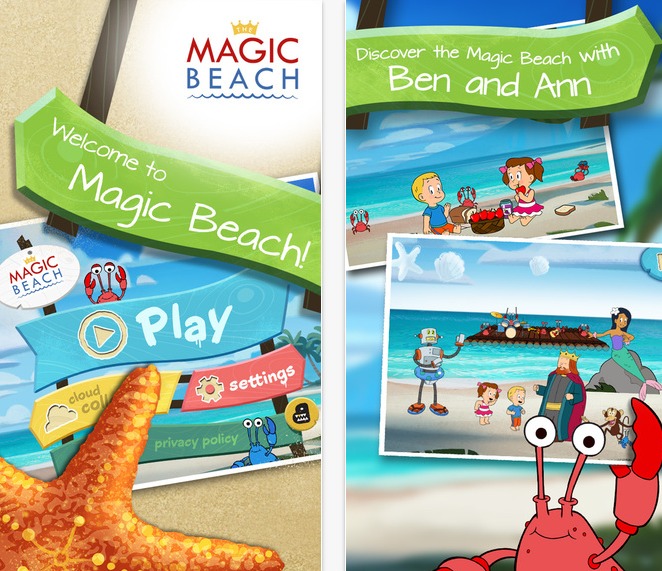 The Sea, once it casts its spell, holds one in its net of wonder forever.

It may seem counter-intuitive to include digital apps in an Earth Month roundup of eco-companies, especially when it comes to kids. But I think we need to meet them where they are, and where they are is getting tons of information via digital means. Any time we can make learning fun is good; any time we can include learning to care about our environment is even better.

The Magic Beach is an interactive eco-friendly storybook app, based on the book Magic Beach written by children’s author Crockett Johnson. If the artwork looks familiar, that’s because Johnson penned and illustrated the kid favorite Harold series, which starts with Harold and the Purple Crayon, as well as the Barnaby comic strips from the 40s. He was also the illustrator for Ruth Krauss’ The Carrot Seed.

There’s a fairly fascinating review of Magic Beach on its Amazon page (you can read it here) that makes me want to run out and buy the book; it appears to be a retelling of sorts of the Fisher King and was discovered still in its sketch form, while research while being done on a biography.

In the story, young protagonists Ann and Ben “have only to write a word in the sand and the item appears before them, making an intriguing play on the notion of spelling and spells. Musing that such things only happen in ‘stories about magical kingdoms,’ the pair proceeds to create just that, conjuring up a king, farms, castles and a horse, on which the monarch rides off to his kingdom, just as the tide rushes in.”

The Magic Beach app (ages 4+) allows players to aid Ann and Ben on their quest to help restore the enchanted beach to its former glory and help a disheartened king reclaim his throne. The beach’s magical waves wash over the written word, creating new characters and objects. There are guided spelling challenges, original animated characters and challenging eco mini-games that encourage environmental stewardship.

The Magic Beach app includes the first two chapters and game of the adventure in the free download; the complete story is available via an in-app purchase of $2.99. It’s compatible with iPhone (iPhone 4 and newer), iPad (iPad 2 and newer, including iPad mini), iPod touch (5th gen and newer).

You can download The Magic Beach app from iTunes here.