No one in the world ever gets what they want

and that is beautiful.

Well, that’s not entirely true, is it? You can get what you want in dreams, in books… and in video games.

While I’m not a fan of some video games (basically those that are ultra-realistically violent and/or hyper-sexualized), I have a hard time denying my kids the joys of a good video game. And that’s because I’ve loved them myself, plain and simple.

The best video games are enormously complex stories, puzzles that require you to find all the pieces and then lock them all together… all while keeping the bad guys at bay.

Or, they’re deceptively simple action games that demand lightning fast reflexes and an ability to find patterns in the system so you can stay mentally a few moves ahead.

I’ve loved them both. I’ve spent countless hours immersed in Myst and working my way through the Final Fantasy series. I’ve fought zombies and I’ve tried to reverse the effects of some genetic mutation (I’m a little fuzzy on that game— AND its sequel— as I basically played them straight through.)

Sonic the Hedgehog. To this day, I think I can play Sonic the Hedgehog blindfolded, moving when the music hits just the right notes. Because you couldn’t save, remember? You died enough times, you started back at the beginning.

We had an Atari. In 1995, folks. I don’t remember where it came from but for a few glorious months, until the paddles gave out from use, it consumed our lives, and the simplest games were the most engrossing.

I can play Ms. Pac-Man for 20 minutes, easy, on just a quarter. My brother used to spend hours on Street Fighter II; if your opponent died you would get to go on. A dollar could keep him in business all dang day.

I remember programming my own games on the piece o’ crap computer I had as a kid. The simplest of road games. Totally not worth the effort but yet, what a thrill.

is at once an homage to those games and the times we played them in, and a vision of where gaming could go, what it could be. 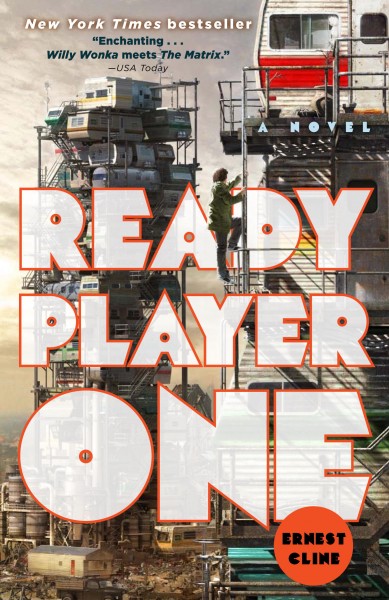 Set in 2044, the world is a bleak place: in the throes of an energy crisis, environmental disasters, an economic depression that has gone on for decades. A “world of chaos, pain and poverty” that’s not too hard to imagine our kids inheriting.

It’s also easy to imagine a totally immersive world of gaming, where people the world over log in to a shared reality. Heck, we probably have that technology now.

Combine the two and it’s almost frightening to see how we could be on a collision course with this exact scenario. A virtual reality that we can not only game in, but spend our lives in, to escape an ever-increasingly unpleasant real reality.

But of course, that reality remains unchanged if people aren’t willing to be a part of it.

I digress. While these themes are present and do play a part in the story, and are of particular interest to me, the real joy of this book comes from the main plotline. The inventor of this alternate, immersive reality (called OASIS) dies, leaving behind his vast fortune to the person who can find the “Easter egg” (in gamespeak, a surprise or bonus coded into the game) he has hidden in his unimaginably massive virtual universe. Looking for clues about the egg’s location, egg hunters (or “gunters”) study obsessively the minute details of the man’s life: learning to play his favorite video games, watching the movies and cartoons of his youth, reading the books, learning the slang.

Of course, cutthroat corporate America is all up in that hunt too, trying to win themselves so they can litter the virtual world with their marketing, and charge everyone money they don’t have to enjoy the one escape available to them.

It’s fun. It’s fun to see that time period through the eyes of the future, and to revisit it yourself (the Dungeons and Dragons, the Monty Python, the kitschy Japanese cartoons and movies). And it’s fun to imagine how those games would play out reimagined with the interactive technology of the future.

And it’s fun to root against the bad guys. They’re pretty one-dimensional, as they should be in a story like this 🙂

Like most RPG games I’ve ever played, the book was slow to start, lagged a bit in the middle when I got lost… and then picked up steam until I couldn’t put it down. I literally devoured this thing in under 24 hours.

If you’ve ever played a game until you dreamt about it at night, if you’ve ever sat in a world fighting lower monsters and demons to level up your hit points before greeting the level boss, if you remember message boards, Gamera, Blade Runner or Matthew Broderick in War Games… you’ll get a major kick out of this book. It’s Neal Stephenson (I think Snow Crash, incidentally, has the best opening chapter of any book EVER) meets Terry Pratchett: cyber nerdgasm with a healthy side of snide social commentary.

What’s it like to a kid who didn’t live through it all? Here’s Jake’s take:

I liked this book, which isn’t something I usually say. I think the coolest part of the book is that all of the references actually were real, and I could understand them.

I think the whole idea of the book is a cool concept, because it revolves around the idea that you can’t escape reality because reality is real. I’ve always wanted something like a virtual galaxy to exist, but after reading this I have other ideas.

I feel like I have to watch every movie mentioned in the book now.

Oh yeah. The author has set up an Easter egg quest of his own. And the first to finish wins a DeLorean:

To celebrate the release of the Ready Player One trade paperback on June 5th, I’m holding a contest inspired by the plot of my novel. I’ve hidden an “Easter egg” in the text of both the hardcover and paperback editions of Ready Player One. If readers can find this hidden clue, it will lead them to the first of three increasingly difficult video game challenges. The first video game challenge is an Atari 2600 game that contains another Easter Egg that will lead you to the Second Challenge. Completing the Second Challenge will lead you to the Third and Final Challenge.

The first person to complete all three of these challenges will win the grand prize, a 1981 DeLorean automobile, complete with a Flux Capacitor! I’ll be driving this DeLorean across the country on my book tour this June, so contestants will have a chance to see the grand prize in person at each of my book signings.

We’ve got a copy of Ready Player One to give away for your geeky enjoyment, and to get you one step closer to winning a DeLorean. Just follow the directions in the Rafflecopter widget to enter: there are up to 10 entries available, choose as many as you like.

To learn more about the book, its author and the DeLorean, check out the Ready Player One website and Facebook page.

As a participant in this From Left to Write book blog tour, I received a copy of the book for review (and a second for Jake). Check out the other stops on the blog tour for a chance to win a copy of Ready Player One.