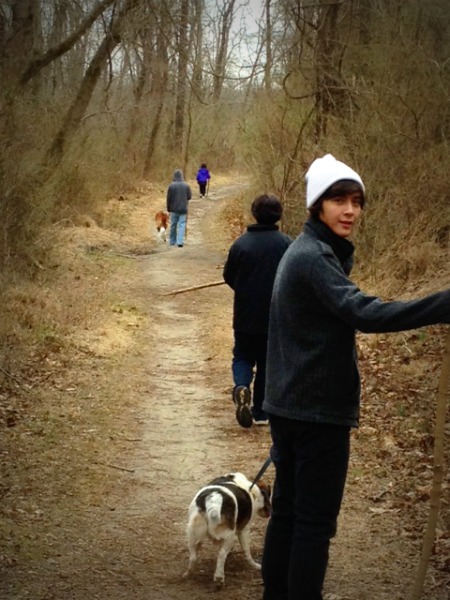 Into the woods, each time you go,
There’s more to learn of what you know.

-Stephen Sondheim, Into the Woods

We live on the border of a nature preserve— we have trails starting right off our property that connect with state park bike trails and foot paths that sprawl all over Delaware and Pennsylvania.

We’re extremely lucky, but we really haven’t ever taken full advantage of these resources that are literally right in our backyard. So, the first weekend of March we ponied up for a Delaware parks license (good for all the DE state parks) and hit the trail. 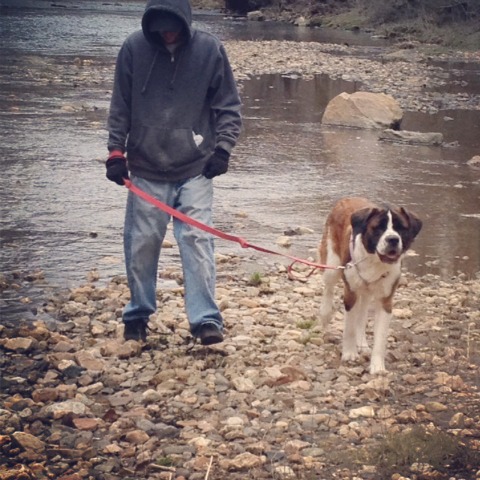 Indulging in my favorite— tossing pebbles in the creek.

This was Karma’s first walk in the woods and I’m pretty sure she loved it. Everyone we passed was taken by the sight of a Saint Bernard trotting along the trail. 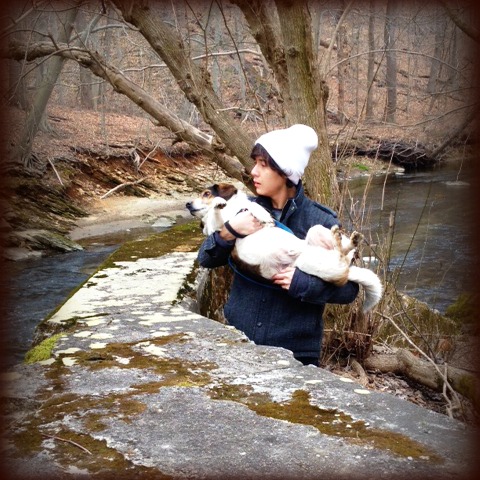 There’s all sorts of cool things to see in White Clay Creek State Park; here we were looking at the remains of an old bridge. Jimmy seemed upset that he couldn’t see what we were looking at (Karma, of course, is just as tall as the kids when she’s up on her hind legs), so Jake gave him a lift. 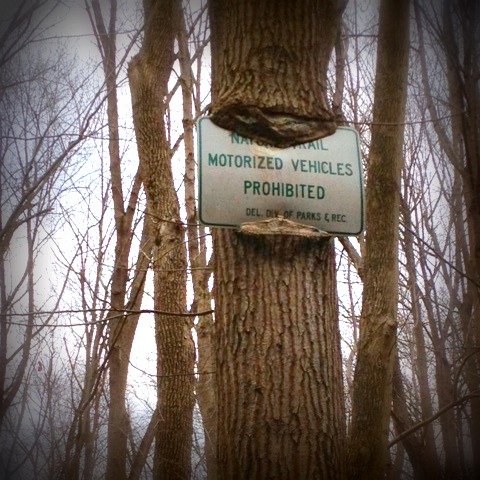 I love stuff like this— flowers growing from cracks in sidewalk, birds nesting in the crooks and crannies of building facades— visions of nature reclaiming its territory. 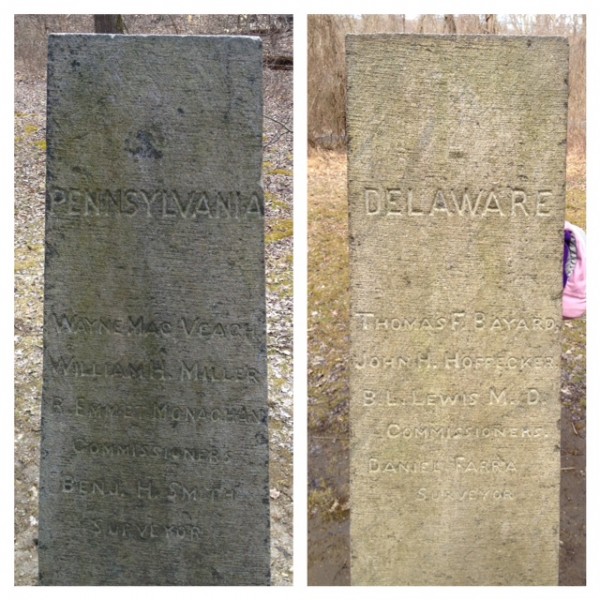 The next weekend we hiked out to the Arc Corner Monument, where Delaware meets Pennsylvania at the end of the curve; an area called the Wedge. (Picture shows either side of the monument. I didn’t take a photo of the top as it was covered with bird poop.) It is, I think, one of the boundaries of the Mason-Dixon line.

This video goes into how the Mason-Dixon wasn’t a line so much as 3 line segments or a curve, and attempts to illustrate where the Mason-Dixon hits in this area. I say attempts because I watched it twice and I’m still not sure I’ve completely got it.

Interesting fact from the video that I didn’t know even though I grew up in Delaware: since DE never seceded from the Union and was considered a “Northern” state, the slaves held there weren’t freed when Lincoln emancipated the South. When I read a bit more about it, I found that DE seemed progressive on the slavery issue— it was early to ban slave imports and slaves sold out-of-state were automatically freed— but that was more to keep in-state slave trade profitable. Delaware had the largest (proportionally speaking) free black population of any state, but also had really horrid attitudes and codes of conduct towards them. Perhaps unsurprisingly, not something they really emphasized in history class.

Anywho, our next hike will be to the Tri-Corner, where Delaware, Pennsylvania and Maryland all meet. When I explain where I live, I like to say “within hiking distance of the DE-PA-MD tricorner;” even locally, this is a geographically confusing idea to a lot of people. Anyway, you can probably throw a rock or a carefully-banked paper airplane into DE from our backyard. 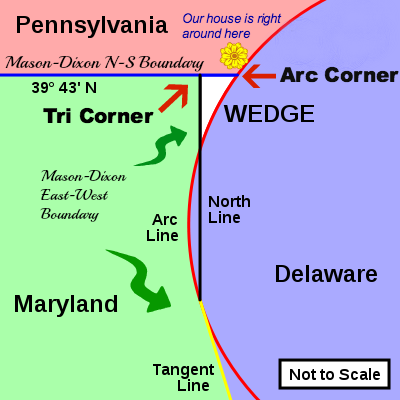 Unlike the week before, which was pretty windy and bitter, this second hike was warm and filled with sunshine; I stripped down to my tank top and was still sweaty. It’s funny how 50 degrees in March can feel like heaven, but 65 during the summer means long sleeves and sweatpants. 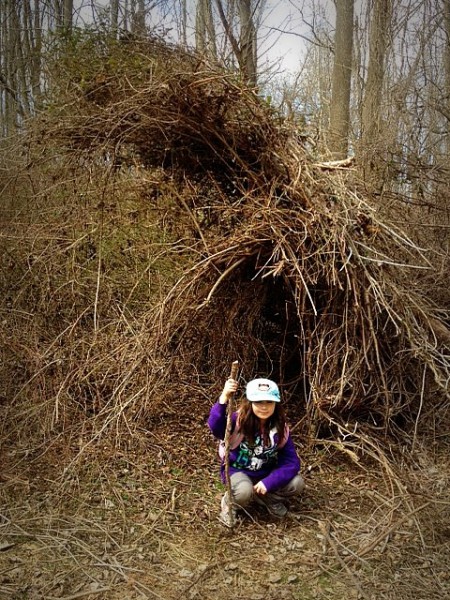 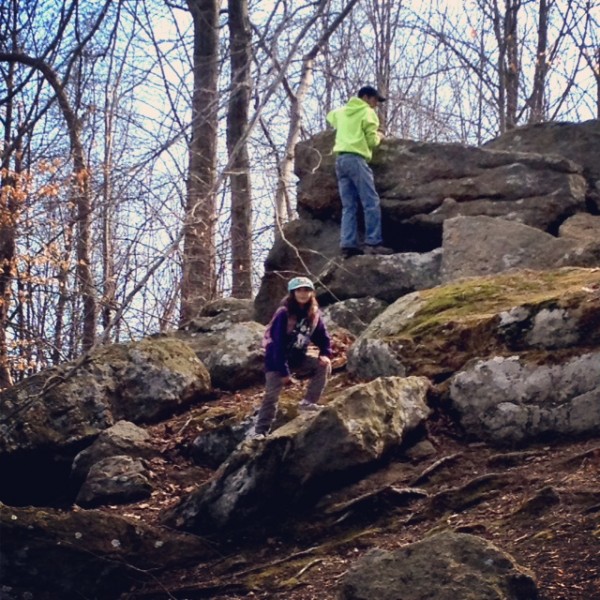 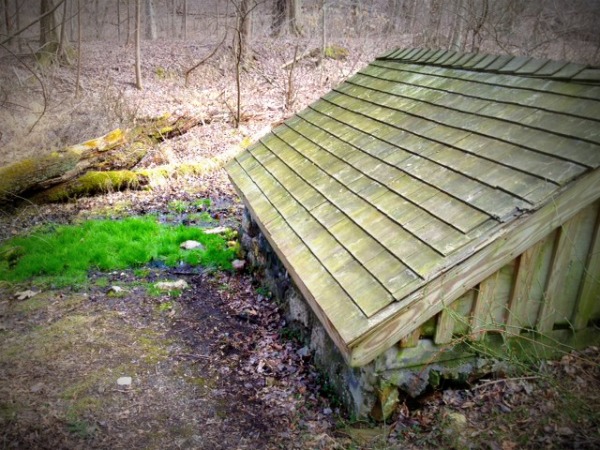 “I bet there’s good eatin’ on that fresh grass,” Jeff said. “Yeah?!” I replied, thinking of ramps and garlic scapes and a possible delicious, albeit illegal, bounty.

The first greens of spring are amazing, they don’t even seem real. So bright and electric and full of vibrant life.

We set out into the woods for a bit of exercise, a bit of history. But for me the best part was seeing the signs of spring, keeping me going through those last few wet, cold and dreary days of winter. 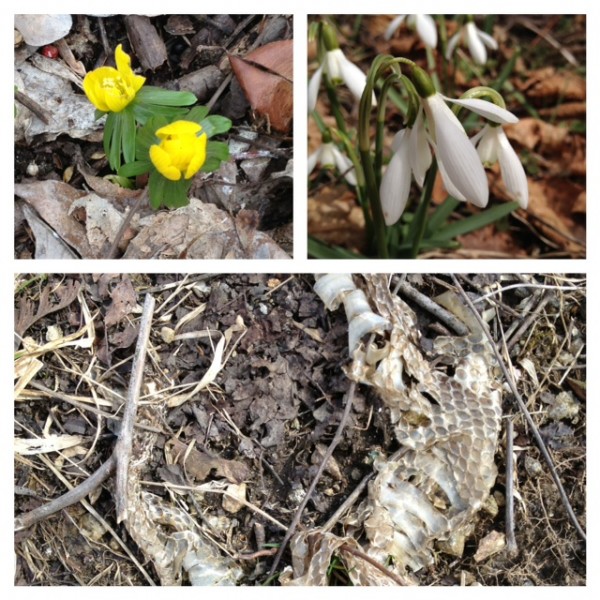 “Into the woods, each time you go
There’s more to learn of what you know.”

It’s true. It doesn’t matter how many times you go into the wood, you always take something new away.

Even if it’s just a renewed hope that you can get through this— whatever “this” means to you right now.

It’s the first day of spring, one of the most joyous days of the year for me.

I can’t wait to get outside.