So far, we are the only people I know that compost; this was absolutely the tipping point that catapulted us into the “dirty hippie” catagory. But it’s really easy, and rewarding in many ways:

What we do is a form of composting called “vermicomposting”, which roughly translates into “big worm farm”. Maverick, my younger son, really, really wanted a worm farm for Christmas, and he was lucky enough to actually receive one from his aunts and uncles. It is his pride and joy; ask Mav to describe himself and I can guarantee one of the facts included will be “I have over one thousand pet worms.” 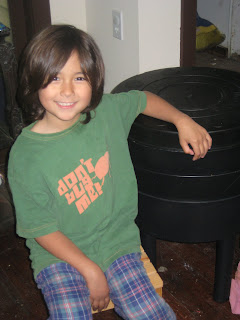 I imagine this fact will fall somewhere between “I like to play video games” and “My dad likes to call me Scott Baio.”

I did some research and found that vermicomposting has some definite advantages for the beginner composter:

, is made of recycled plastic, and runs about $130 dollars. The do-it-yourself crowd can find advice for constructing a worm bin from an old dresser drawer here.

The Can-O-Worms did not come with a voucher for worms, as we had hoped, and so Mav used his allowance to buy his starter set of 1000 “pet worms” (he paid for half. We matched it.). This is enough worms to process up to one pound of scraps every day.

I purchased our red wrigglers online from a local company- Uncle Jim’s Worm Farm in Spring Grove, PA. Our 1000 red worms set us back $19.95, plus the cost of shipping. Cutting open the bag of worms was disgusting and a lot of fun- sort of like squishing around in good, wet, earthy mud. We dumped the worms into the bedding that came included with the worm farm, moistened everything down, and left them alone a few days to get comfortable before starting the feed.

So. What does one feed worms?

We don’t add in any meat waste or our guinea pig’s droppings, even though this is allegedly an option, because it just seems gross. I’ve read you can give them leftover pasta, but we eat all our leftovers. You can give them grass clippings or leaves as well, but our lawn and leaf/ worm ratio is so ridiculous that we just leave that stuff outside for the outdoor bugs and worms to take care of.

There was definitely a learning curve involved here. In the beginning, we were feeding the worms too much, and they were just not keeping up. They apparently are slower to process the scraps when they are cold, and also just take some time to become an established, waste-munching machine. They were defininately not going through a pound a day.

When the Can-O-Worms started to smell a bit, I cut them off for a few weeks and crossed my fingers. When I finally checked on them, really fearing the worst and resigned to starting over, lo and behold: lots of worms in the vastly diminished scrap pile, rooting around.

I guess at first they were eating the bedding, and that it takes a while for the food waste to become good worm food.

Therefore, these are the first bits of vermiculture advice I can pass on:

The papers that came with the worm farm mentions that the “tea” can have a “strong odor”, so I am a little frightened. This is something I definitely want to undertake outdoors, but the forecast is calling for a run of cool, rainy days, so we’ll all have to wait a bit for the next warm, sunshiney day for the next installment.

I think the boys will probably want to be the ones to chronicle that adventure- stay tuned!

For more information on home composting in general , look no further.

For a good look at the sheer volume of our daily waste, and exactly what happens to it, I highly recommend Garbage Land: On the Secret Trail of Trash

by Elizabeth Royte. This book is a great read!

And finally, everybody recommends the book Worms Eat My Garbage

by Mary Appelhof. My library doesn’t have a copy but maybe yours does! Read it and let me know what you think!