You are here: Home / Family, Parenting / Backyard Camping is Exciting! or, Why I Should Have Left The Dogness Inside 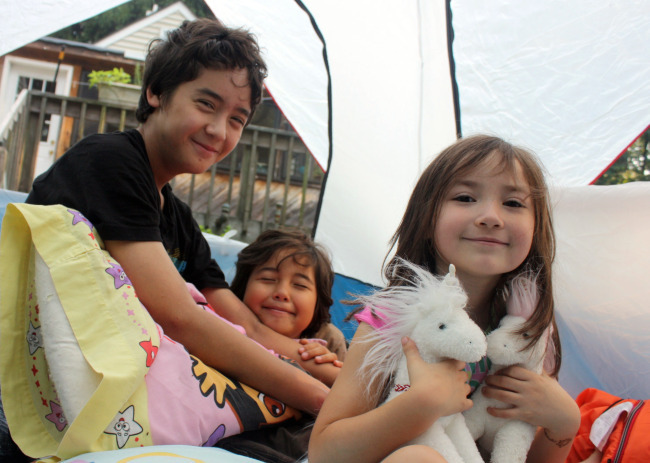 To the sane and free it will hardly seem necessary to cross the continent in search of wild beauty,
however easy the way,
for they find it in abundance wherever they chance to be.

Yesterday, in addition to being the 11th (!) anniversary of my wedding day, was the day of the annual Great American Backyard Campout. I think this is our third year participating, and the kids camp out in the yard quite frequently now, so I was thinking it may be time to move on to more adventurous campsites.

Now I’m reconsidering– last night was enough adventure to last me a while.

Allow me to begin at the beginning. Or thereabouts.

The tent went up without incident- i.e. Jeff did it for us- and the day was so hot that I was vaguely looking forward to sleeping outside, although as usual I underestimated just how hard the ground is and just how chilly it gets in the middle of the night.

After an evening of parachute men, homemade sno-cones and a last minute romp with my brother’s crazy dog, the kids were delighted to find a toad waiting for them by the door and a night lit by a full moon and a billion fireflies. A perfect landscape.

There was the required telling of ghost stories, playing of “I’m going on a picnic,” jockeying for elbow room and poking of siblings, until Mom sang the standard campout goodnight lullaby of, “Next person who talks is going inside with Daddy.” Sleep and snores soon followed.

I finished up a bit of work once they were all asleep– brief pause of thankfulness for the wonder that is Wi-Fi– and then went to put my computer inside.

The Dogness, who had been driving me completely squirrelly nutters pacing the tent and standing on his hind legs to look out the windows, streaked out of the tent into the darkness.

Now. I had been hearing voices for the last ten minutes or so. We live adjacent to a path that takes you down to park trails. It’s hardly ever used because it’s not really drivable and there’s nowhere convenient to park; it’s mainly traveled by bicyclists in the know. But on the weekends the teenagers from the neighborhood up the street like to congregate there and sneak a stinky cig or two. I did the same as a teenager and I leave them alone. But The Dogness? Fiercely defends our property line, and I was sure he was up there harassing them. I dreaded having to confront them in my pjs and having to hear them apologize and call me ma’am. Ugh.

But no. I guess they skittered away as soon as he started going insane. 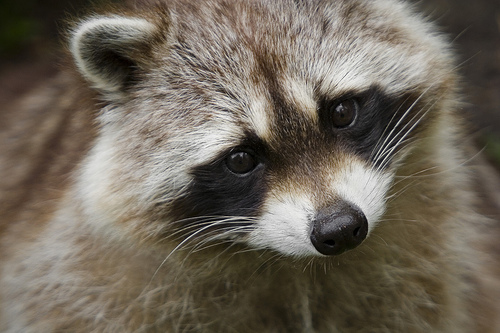 How many mouths Nature has to fill,
how many neighbors we have,
how little we know about them,
and how seldom we get in each other’s way!
-John Muir

It was really tiny, just a babe really, and I guess its defensive position is on its back, and it looked really cute in that second as I illuminated it. I was angry with the dog for scaring it.

Until it started growling and making hissing noises. And popping up onto its feet with its teeth bared. 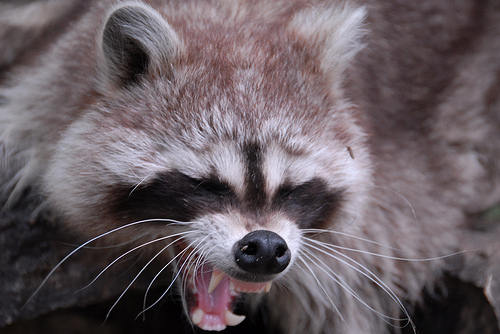 Then, I faced the real question: how does one extract their wildly barking, circling (recently adopted shelter BEAGLE MIX, that’s a hunting breed, folks) dog, with one hand already occupied by the lantern, without being bitten by the (possibly rabid) raccoon in the process?

I grabbed a long stick, and tried flicking the raccoon away, but that didn’t work. Every time I got the thing facing the other direction, Jimmy would grab its tail and fling it around in a circle, so that the screeching, bared teeth would come whipping towards my legs and I’d have to eeek! and jump back.

Finally my brother, who thanks to the fates that be had decided to stay the night, came to help me and manned the stick so that I had a free hand to yoke up the dog. (Not being a blogger, it didn’t occur to him to grab a camera on his way out.) The raccoon sauntered away into the woods, the dog was sentenced to INSIDE, and I went, breathing heavily and covered in gallons of sweat, to wait for the adrenaline to burn off so I could go to sleep.

The kids and Jeff? Never even woke up. (Jacob was awake from the beginning– can’t even imagine what he thought was happening.)

Jimmy, for those concerned, is all up to date with his rabies shots and looks none the worse for wear, but I’ll call the vet tomorrow to have him looked at.

Robin is a bit the worse for wear; my muscles are all sore and spent from trying to grab a frantically bobbing and weaving hunting dog with one hand, while attempting to avoid a series of rabies shots myself. If anyone thinks this is easy I invite you to try it.

In any case, the dog is now maxing and relaxing, sleeping on my bed while I have a day of cleaning, grocery shopping, and work ahead of me.  NOT FAIR.

So. That was my evening. What’s new and exciting in your life?