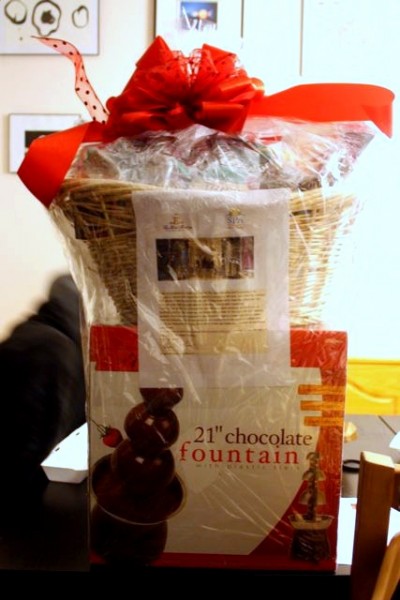 A few weeks back Jake’s school held an 8th graders vs. teachers basketball game fundraiser. And he really wanted to go.

I really sort of didn’t; it was on a Thursday night and my work week was already feeling ten days long. But I remember all too well begging my dad to go with me to watch the 8th graders soundly trounce the teachers, so I figured some sort of karmic rebalancing was in order. Jake said it started at 5:45, so I mentally aimed to get there around 6.

As it turned out, doors opened at 5:45, and the game didn’t start until 7, but karma was on my mind so I kept the grousing to a minimum. We bought our tickets, had a dinner of pizza and hot dogs and the most chemically-tasting, wretched lemonade ever. But everything was raising money for the school athletics programs, so again I (sort of) held my piece.

Each class in the school had put together a themed basket of goodies, purchased from parental monetary donations or generously donated by local merchants. To burn time, I bought a pile of raffle tickets and the kids filled them out, then dropped them into the boxes in front of the baskets they wanted to win.

There was a basket of beachy bounty: a weekend stay at a hotel, restaurant gift cards, vouchers for the waterpark and bowling. An Apple basket with an iPod and iTunes gift cards. A “Backyard BBQ” with a (really nice) outdoor grill, grilling tools, a box full of specialized seasonings and rubs and a gift card good at a local butcher.  A “Mom’s Night Out” basket with spa vouchers, dinner gift cards, movie tickets, a bottle of wine. A “Money Tree” that was simply a box with a mystery amount of cash, and a gift certificate good for one fruiting tree from a local nursery. There were about 2 dozen in all, but those are the ones I remember wanting to win.

Thing is, I often win at these things, but never anything good. I’m always the one who wins the bottle of wine given as the first prize (I don’t drink wine). So then I know I’m not gonna win whatever the grand prize is, but I can’t complain, because I’m one of the relative few that did win something. It’s twisted.

True to form, I won the Chocolate Basket: about two tons of chocolate in various forms (did I mention I don’t eat chocolate, either?) and a chocolate fountain.

As I posted immediately to Facebook, “Is there anything in the world I need less?”

The kids, naturally, were thrilled with the bounty that Lady Luck had bestowed upon them as their Mean Mommy Who Pays the Dentist Bills never would. The various chocolates were devoured in about a week’s time, but the chocolate fountain was held in reserve. The inaugural run of such a delight couldn’t be witnessed by our eyes alone.

A family gathering for a birthday was soon scheduled, and Jeff & I made a pound cake and cut up bananas and strawberries for dipping. There was a lot of secrecy & grandstanding & drama and then Jeff assembled the fountain in all 21 inches of its glory. The chocolate was added, the fountain began to burble and cascade… and then it broke.

The children then used the skewers to scratch their names into the frozen chocolate. 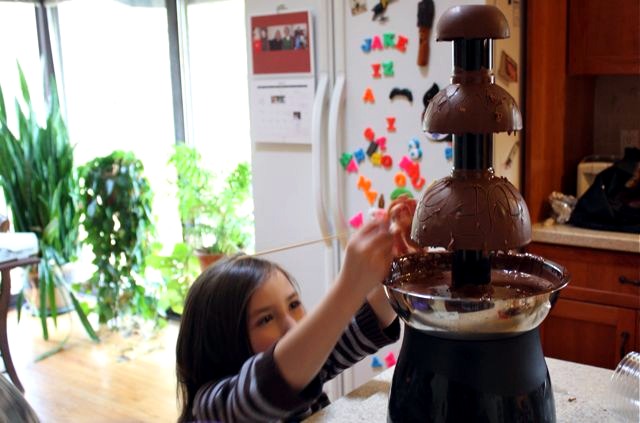 This is pretty much the way my luck always works. Just once… I’d like to win the money tree, you know?

ANYWAY, when I picked up my basket they also gave me an envelope, and I didn’t really give it my full attention until long after the fact. In that envelope?

A $100 gift card for The Spa at the Hotel Hershey.

I just went to Hersheypark last year, folks. It’s close enough that I can’t really justify the cost of staying over, but far enough of a drive that I’d want to pack every moment with rides, rather than leave my family to cash in my spa treatment.

That being said, I LOVE HERSHEY. If you haven’t ever been, I would totally say it’s worth it to stay over, so you have time to not only do the rides, but also the Chocolate Factory, or the Hershey Gardens, or the Hershey Theater, or a concert (coming up this season: Imagination Movers, The Monkees, NKOTB with the Backstreet Boys… also, the Ringling Bros & Bailey circus). The day we were there last summer I think Ke$ha was playing… and lookee here, it looks like they’re running some sort of Kids Stay, Eat & Play Free special in May & June.

So I’d love for you to help me generate some better karma! No sense letting this card sit around until we’re ready to go back to Hershey, when it would make a great Easter or Mother’s Day gift (or just a nice surprise to keep!) for someone this year.

Leave me a comment below about karma, or luck, or your favorite chocolate to be entered to win the $100 gift card. “Like” my site’s fan page on Facebook for a second chance to win; just make sure to leave a second comment so you’re counted twice.

UPDATE: I just looked in the envelope again and there’s another card included that reads: “Present this gift card for purchases at any of the following Hershey Entertainment & Resorts® locations and operations: Hersheypark®, Hersheypark® Arena/Stadium/Star Pavilion, The Hotel Hershey®, Hershey® Lodge, Hershey® Highmeadow Campground, The Shops At The Hotel Hershey®, The Spa At The Hotel Hershey®, Cocoa Beanery®, ZooAmerica® North America Wildlife Park, Hershey Bears®, Giant Center, Hershey® Links, Spring Creek Golf Course, Hershey® Country Club, Hershey Theatre, Hershey Gardens, The Hershey Story, Hershey® Cleaners, Houlihan’s Restaurant + Bar, Devon Seafood Grill, and all Hershey® Resorts Restaurants.” This tempted me to hit “delete” rather than “publish,” but that wouldn’t be very nice of me, would it?

Classic spa treatments at The Spa at the Hotel Hershey. See what you could enjoy with the gift card should you win.

Experience Hershey, PA. One-stop shopping for everything you need to know about a trip to Hershey.

Hershey: More Than Just a Chocolate Bar and a Kiss! Local super-blogger Mindi visited Hershey in December and learned about the Milton Hershey School, a school for orphans started by the Hershey founder and still helping at-risk kids a century later. It was something I’d never known about and I just want to take this opportunity to help spread the word a bit.

They provide free tuition, food, clothing, medical and dental and housing to at-risk children.  AND, if a child graduates from the MHS with at least a 2.5 GPA, you know what they get?  A $80K scholarship to college!  What they are doing for children is nothing short of a miracle.

It’s nice to feel good buying from a local company… even if you’re afraid to eat the stuff because you’re paranoid about cavities forming around your adult braces.

Disclosure: The good folks at Hershey know nothing about me or this giveaway, and are not affiliated in any way. I won the gift card and just want to pass the love along to keep good chi flowing in my life. Is that a shady motivation? Yeah, perhaps.

I never said I was perfect, just awesome.