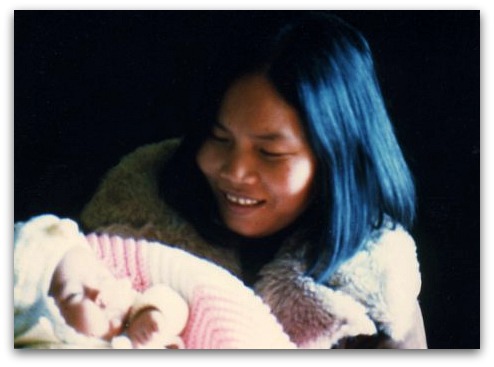 What I need is someone who will make me do what I can.
— Ralph Waldo Emerson 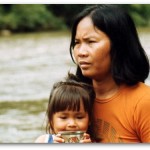 Happy Mother’s Day to every woman out there who fills that role, in any capacity. Who opens her arms and her heart to nurture another life.

I wrote the following tribute to my own mother a few years ago, and I publish it again today to remind everyone to really remember to listen to your parent’s stories, if you’re lucky enough to still have them here with you; and to rectify any grievances before that chance is gone.

Mother’s Day and Father’s Day are difficult, when your parents are gone, a million times more so when you are filled with “if only…” 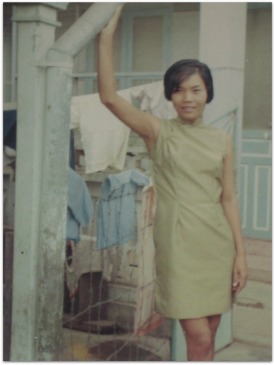 This was my mother, sometime in the early 1970s, in her native Vietnam. She was about 36 years old- she was always sketchy about her age, but also proud of being “so old” (and not looking it).

They don’t celebrate birthdays, apparently, in Vietnam as we do here; nor is age such an important part of one’s identity. Simply put, there are the young and the old; the young are to be envied, and the old to be respected.

Marriage, in Vietnam at that time, was also not as we find it here in the US of A. If a man showed his preference for you, and you lived together, you were considered married. Marriage was not a legal state, as it is here.

My mother found herself married at a reasonably young age and bore three children. Her only daughter died young, of cancer.

Her husband left her. I do not know the reason. I do know that this left her in a state of disgrace in her village, a mother without a husband. She was shamed into leaving her children with her sister, who was respectably married, so that they would grow up in a proper family. She was told to go and work in the city, to pay for the upbringing of these two remaining children, my half-brothers. 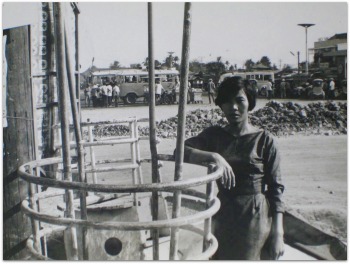 Somewhere around this point on the timeline, my mother met my father, stationed in Saigon. I know nothing of their courtship. I know that my mother thought my father was “so handsome.” I remember my father saying that when he first saw my mother, she was wielding a machete. The place? The year? The circumstance?

I don’t know. It is so frustrating.

I know that my father pledged that he would bring her to this country and they would be married here. What was that like for her, the waiting? Did she trust in his word? Did she continually hope? I would have guessed that she would have little trust in men, or their promises.

My father returned to this country to find all his belongings gone, sold, and no room for him in his mother’s and stepfather’s house. Somehow he found a place to stay, a job. He saved money for some amount of time— again, the anger of not knowing how long— and secured the papers needed to bring my mother here. She boarded a plane, missed her connection in Los Angeles— what happened then? What was that like, to be in such an alien place, speaking virtually none of the language? How did she get to the East Coast? 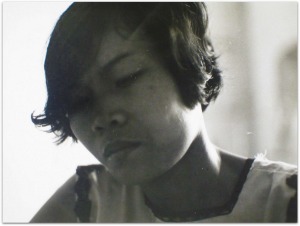 Somehow, this woman survived in a culture of fear, of violence, of war. She saw things, as a child, that no one should ever have to see. Never. I really don’t even like to think about it. But the images are horrific and vivid; they skitter on the periphery of my memory, along with the strange, blank tone of voice that she would use when speaking of them.

She was so proud of her third-grade education; no other girl in her village made it so far in school. She was the smart one.

When there was nothing to eat, she swam across the river and stole two fish from the village there, swimming back with the fish balanced precariously on her head. She was brave and wild.

She put her faith and trust in a young American— barely more than a boy, more than a decade younger than herself— and traveled here, alone, to a land of peace and freedom, half a world away.

I don’t know that she found freedom or peace here. Where she was once imprisoned by violence and gender bias, she now found herself shunned for her ethnicity, her lack of education, her heavy accent. 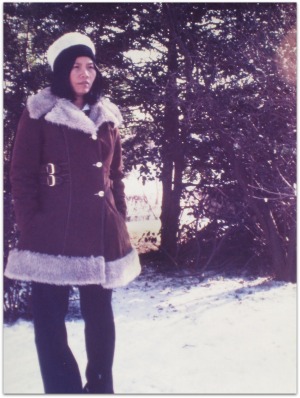 She had not understood how far America was, had not known just how big the world was, had not realized that she would not be able to ever see her family, her children that she had left behind. She lived in a constant state of guilt and worry.

My father worked long hours at multiple jobs. She had few friends. She was often alone.

Then I was born, and nearly seven years later, my brother. We misunderstood her, were embarassed by her. We did not see how fortunate we were, in comparison to her other children. I think she was often angered by that.

She was not perfect. Growing up where she did, when she did, a culture and a time so vastly different to my own, she had issues and neuroses I can’t even begin to tease out or understand. She had a hot temper. She was prone to violent outbursts. She was incredibly fearful and overprotective. She understood our problems and issues and hopes as little as we understood hers.

Guess what— turns out I am not perfect either. Hopefully this is a fatal flaw that my children will overlook in me.

“Endeavor to be patient in bearing the defects and infirmities of others,
of what sort soever they be;

for thou thyself also hast many failings
which must be borne with by others.”

I wish that I had asked more questions.

I wish that I had said some things, and left other things unsaid.

I wish you could be here, that my children could remember you, that you could see how special they are.

So much of who I am, I am because of you. The good and the bad.

Every year I share my mom’s story with my kids and my internet family on Mother’s Day, to keep it alive. Each year it hurts a little less. One day I’ll be ready to tell more of it.

However, when I migrated from my old blog to this one I lost all my old comments. If my mom’s story touched you, will you please let me know? It would mean a lot. 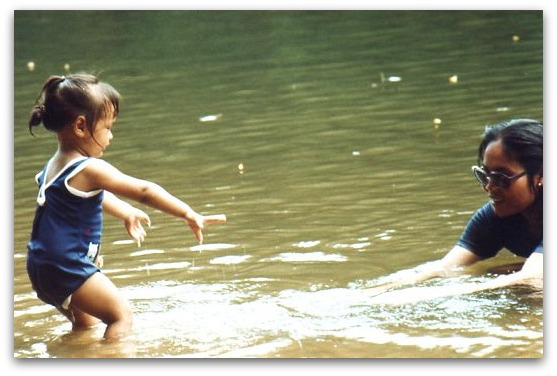