You are here: Home / Books & Writing / Don’t Tell Them What They Can’t Do 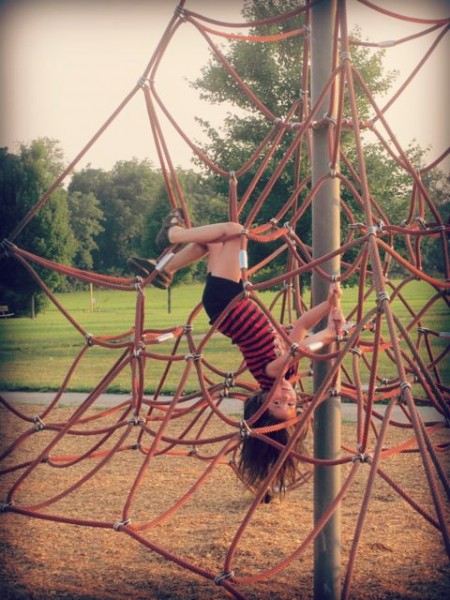 We don’t want to force our children to conform to any group mean.
There’s no reason to dismiss their goals solely because of their ages;
to underestimate a child is to disrespect her.

I overheard her as I passed in the hallway. I had just finished a workout in the Y fitness room, and one of the childcare workers had taken 3yo Cass to visit the bathroom. As she briskly helped Cass wash her hands, the woman tut-tutted about the outfit she was wearing: grey sweatpants and a black tshirt (that read AB/CD in the style of the AC/DC logo).

Game after game Cassie’s basketball coach put her in as point guard because she “can’t” shoot. At her last game, he lent her out to the other team, which was short a player. That coach sized her up quickly and played her as center. She can shoot, just not from far away. She’s short and she hasn’t had much practice, mostly because her coach was so quick to sideline her (and tell her to “cheer,” which is a whole other blog post).

It was the best game she played all season. And parents from both teams cheered loudly for her every time she made a basket.

Jake used to be able to snap his fingers to the music, something that amazed me because I still can’t snap my fingers very well. He was somewhere in the range of 18months, 2 years old, not really talking but definitely hearing. “Watch, he can snap his fingers,” I said to my friend’s sister. “Oh, no he can’t. He’s just a baby!” she scoffed.

I’m sure she didn’t mean anything by it, but he would never do it after that when I asked.

Three times a week I take the kids to the park and I go running. Cass plays on the playground, Maverick shoots hoops on the basketball court right next to it or hangs out with other kids in the near vicinity, and Jacob skates on his skateboard. I’m out of sight for maybe two minutes; the other six minutes it takes me to complete the circuit the playground is in view. But I can tell by the skunkeye I get from the other playground moms when I gather the kids back up that “you really can’t leave your kids on the playground by themselves.”

For real. Do kids really need an adult on the playground? I bet I’d get a few sidelong glances if I decided to go down the slide, myself. It’s a losing proposition all around at this age.

(I should add that yes, my heart is in my throat every time Cass hangs upside down like she is in this picture. I keep my mouth shut because I remember doing exactly the same… only my playground had city concrete beneath, not a forgiving pad of mulch.)

“My kid can’t pick up after himself… pour his own drink… keep his room clean… boil an egg.”

My kids do the dishes, their own laundry, clean the cat box, take out the trash. They can make an omelet, order pizza, sew a button, bake cookies (and a host of other things) from scratch. I’m pretty sure they could balance a checkbook and they do my video editing and uploading. If they were deserted on a desert isle or left Home Alone á la Macaulay Culkin, I’m pretty confident that they would survive just fine (as long as they didn’t kill each other due to getting on each other’s nerves).

Parents often ask how I managed this… I just never told them they can’t do this or that when they were younger. You know, back when they really wanted to do these things.

My examples are trivial, yes. They’re what sprang to mind. Times where I couldn’t understand why an adult would be so fixated on CAN’T.

Up: A Mother and Daughter’s Peakbagging Adventure

is Patricia Ellis Herr’s recounting of climbing 48 White Mountain peaks (each over 4,000ft) over 15 months with her five-year-old daughter, Alex. Can’t simply is not a word in that child’s dictionary, and I adore her for it. She’s pushy and strong-willed and open, the way any five-year-old should be.

And yet she encountered her fair share of adults ready to tell her that little girls can’t climb mountains. Even as she was doing it.

It boggles my mind. Why would anybody tell a kid they can’t achieve something? Especially something big, and inspiring, and doesn’t hurt anyone else?

Kids of a certain age believe they can do anything, and so much of their future personality is bound up in how they explore what they can do.

Of course, they will learn that there ARE things that they can’t do. Discovering these limitations on their own, and how to deal with and compensate for those limitations gracefully is a vital part of growing up. To throw down can’t as an obstacle is unfair. It robs kids of rich learning experiences.

When you grow a plant in a container… it grows as big as the container allows. The rare, tenacious plant will escape the container’s walls and set root in the earth beyond, but for most plants their life expands only as far as the boundaries that surround them.

Children are like plants, and too many are only allowed to grow as far as a parent’s arm’s reach or watchful gaze will permit.

Trish Herr allowed her child to bloom under a mountain vista. I love that. I wish it were the norm… not so remarkable that a book would need to be written to celebrate it.

That being said, it is a remarkable story about a remarkable little girl, and I hope it inspires more people to relax and let their kids expand to fill their world. They’re capable of so much.

I hope this experience will leave an indelible mark in her young heart,
forever there to remind her that small doesn’t necessarily mean weak,
that girls can be strong,
and that big, bold things are possible.

We tell them they can achieve anything.

Can we step back and give them some room to try?

Trish Herr’s then five year old daughter Alex wanted to hike all 48 of New Hampshire’s 4,000+ foot mountains. Would you let your five year old do the same? Join From Left to Write on April 12 as we discuss Up: A Mother and Daughter’s Peakbagging Adventure

. As a member of From Left to Write, I received a copy of the book. All opinions are my own.