You are here: Home / Fitness, Health, Happiness / Ready to #getafterit in 2013 (or, But Asian Girls Wear Red) 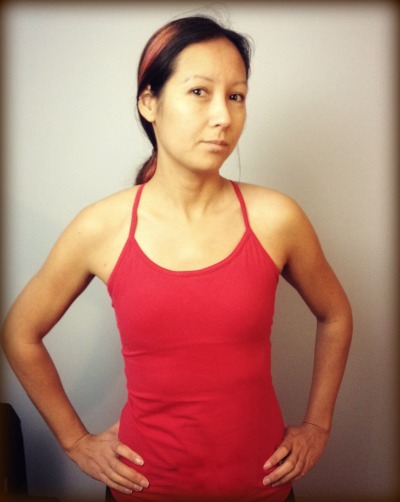 I may not be as strong as I think,
but I know many tricks and I have resolution.

―Ernest Hemingway, The Old Man and the Sea

The last item of red clothing I owned was in 1989 from a store called Deb. It was a slimcut button down shirt that was cut high on the sides. It was part of an outfit on the mannequin in the window, and my mother bought me the cropped black blazer with fringe and paperbag-waist acid wash jeans the mannequin was also sporting.

I’m not sure who could carry that outfit off, other than an optimally proportioned store mannequin with no head and a whole lotta sass. Not the wholesome tween star of a sitcom, but perhaps her wisecracking, fashion-adventurous, morally questionable best friend. It was a hot mess on this 13-year-old gawky, coltish, flat-chested beanpole.

Actually, I wasn’t even a beanpole. I was still really short then.

ANYWAY, I never bought anything red after that. OTHER people used to buy me red all the time, and I wouldn’t wear their gifts, and they would ask why, and I would say, “I don’t do red.”

“What? But Asian girls wear red.”

Sigh. I have no idea where this concept comes from or why people say such things but count me out.

I’m a big believer in dressing up. I think you alter your movements and your moods to fill the shoes, so to speak. When I’m not feeling well I put on makeup and I feel better. My new thing is when I don’t feel like doing a chore I put on high heels and a party dress. Put on a smile, and studies show you’ll actually feel happier. And changing into badass fitness gear and gathering up my high-tech accessories, I’m ready to be an athlete. Fitness is my sport.

So, admittedly I was a little eh when I pulled the CrossFit Racer Long Bra Top out of the box Reebok sent me. RED. And tops with built-in bras don’t usually work on me since I don’t, strictly speaking, need the support.

You know what? Sometimes it’s really, really nice to get random things to try out. Because I never in a million years would have given this top a second glance, it’s not “my style,” and it’s now one of my absolute favorites.

It’s a flattering length. It holds in what it should. It covers what it needs to. It’s soft and the seams aren’t noticeable. It doesn’t move during a workout. Afterwards I still look pretty neat and fresh, but when I take the shirt off it  tends to be soaked on the inside. It does an incredible job of wicking away the sweat so it doesn’t interfere.

And I think I look pretty damn good in it. Even if my back has gone a little soft these past few months… I’ll get to work on that. 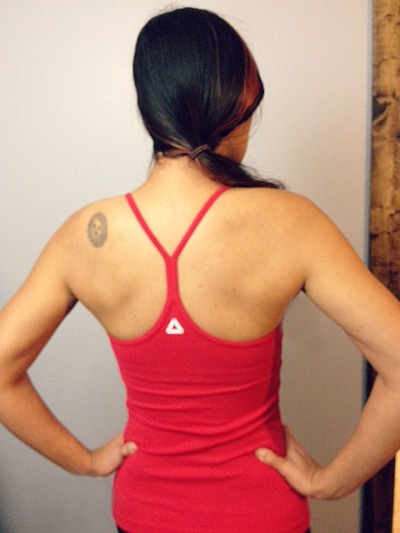 Look at that. Maybe Asian girls do wear red.

And maybe I do feel powerful. And strong. And confident. And passionate.

Dang it, why was I letting a 13-year-old girl call the shots?

You may have noticed I didn’t do any New Year’s Resolution posts.

I wrote some, and then I had some serious revelations on New Year’s Day, as I ran alone for 8.5 miles, the longest run I’ve ever done (by a lot. Like, 3.5 miles). One of which being the fact that I still make decisions influenced by the fears and insecurities I held as a kid.

I’m ready to get after it this year. You?

Any ideas where the whole “Asian girls wear red” thing comes from?

I just googled “Asian girls wear red” and I came up with pretty much NADA. So quite possibly this is just a very weird coincidence, as I know at least half a dozen people have said this to me. Possibly just to get my goat after I didn’t wear the gifts they gave me after being scarred by dubious late 80s fashion.