You are here: Home / Green Tech / Switching Allegiance: This is Probably the Most Ridiculous Blog Post I Have Ever Written

Take most people, they’re crazy about cars.  They worry if they get a little scratch on them, and they’re always talking about how many miles they get to a gallon, and if they get a brand-new car already they start thinking about trading it in for one that’s even newer.  I don’t even like old cars.  I mean they don’t even interest me.  I’d rather have a goddam horse.  A horse is at least human, for God’s sake.

~J.D. Salinger,
Catcher in the Rye

OK. So way back in September of ’08, I expressed my undying love of the sexy sexy Tesla Roadster (above), an all-electric vehicle selling for the bargain price of $109,000.

Actually, in my own defense, I got a little huffy at first about how making such an astronomically priced vehicle just reinforces the notion that being “green” is only for the rich and frivolous. But… people like to have nice cars, right? Fast as blazes? We need eco-friendly status symbols too, I guess.

Only now, I’ve seen pics of the newest model of the Roadster, and I am way less impressed with the sexy sexy. 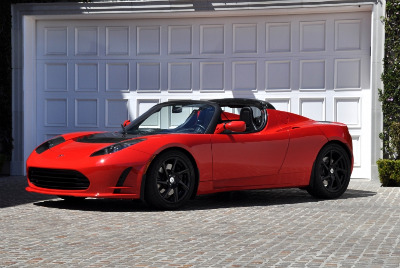 Yuck, right? It looks like any other middle-aged crisis. I’m not spending my hard-earned pretend money on that thing.

In a way, I’m relieved– I’m free to spend that imaginary $109K in other places now.

First I checked out the “normal folk” Tesla vehicle, the Model S: 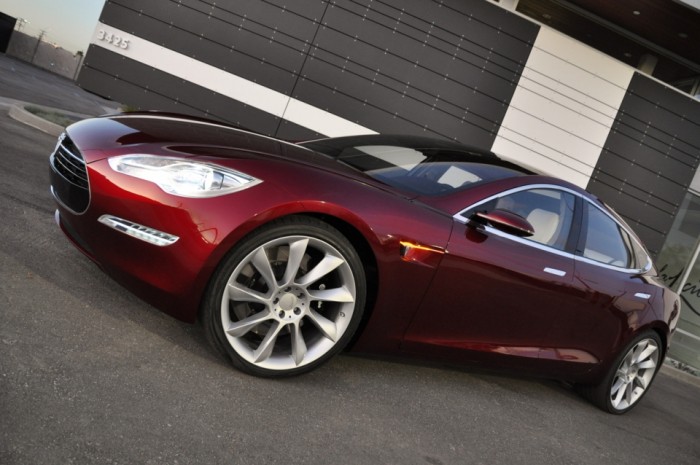 I don’t hate it. I’m not crazy about the $49,900 price tag (after federal credits), but we’re looking at 300 miles to the charge AND it seats five adults and 2 children (where?) AND Tesla claims it can fit “a surfboard, a 50-inch flat-panel TV and a mountain bike all at once.” That is impressive. 5.6 seconds to 60mph sounds good, but I don’t actually have any clue how that stands in relation to any other car than the Roadster (3.7 seconds). (I looked it up. My husband’s car- a sporty 2000 Subaru Impreza- had a 0 to 60 of 4.7 seconds when it was new. So, about sports car range. A brand new Corvette, 3.7 seconds. The Roadster looking pretty killer on this spec.)

However, the Model S’s future is shrouded in mystery: not yet in production (slated to begin in 2012 but no factory has been secured, I don’t think), and Tesla’s finances look unsteady. I don’t know. I just don’t feel confident about this car right now.

Meanwhile, the Boxwood plant (formerly GM) a few minutes away from us has been purchased by Fisker, another electric car company. The Fisker Karma went on tour a while ago and my brother obligingly went into Wilmington to take a few pictures for me and give his professional opinion (he’s a car person). 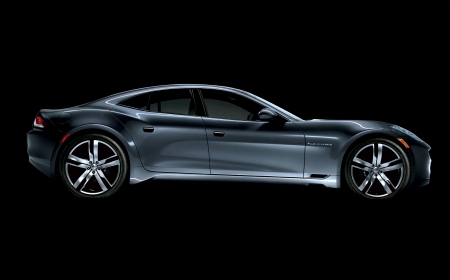 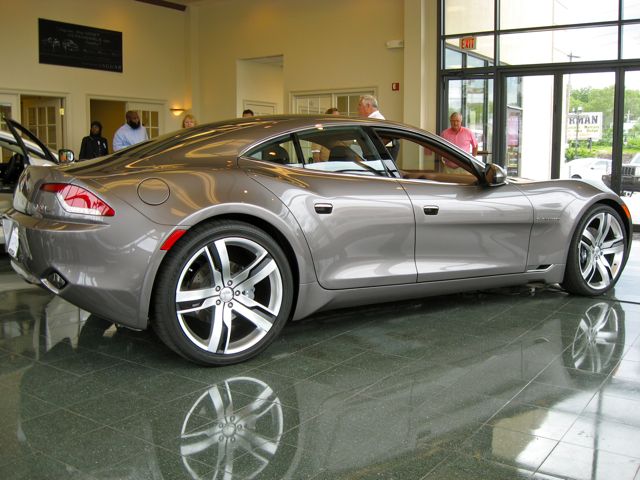 The interior looks to me like it was designed to appeal to a snobby older man with aspirations to be of British (or possibly Italian?) descent, and of course that’s probably the case. Why are only minivans and sensible cars marketed and outfitted with the discerning mom in mind? 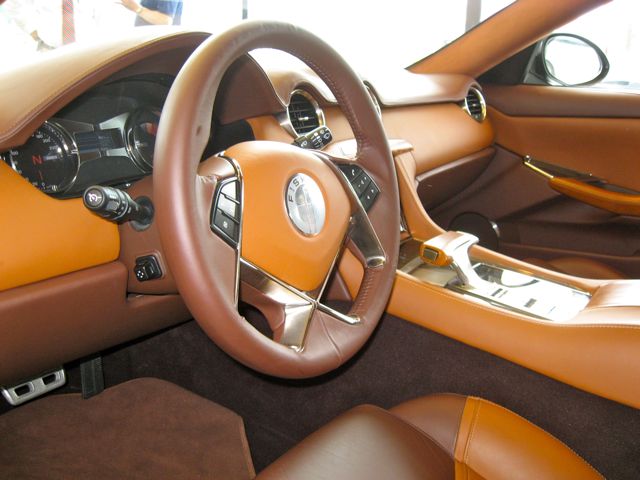 My brother, the professional car person, said that it was a good-looking luxury vehicle and looked right at home with all the Jaguars. At $88,000 dollars, I guess that’s the way I’m supposed to be looking at this: an eco-alternative to the Jaguar (also a car of lust-inducing proportions). Ah, yes. On the Fisker website it does indeed state that the Karma will “offer a responsible alternative to those in the market for traditional full size, fully equipped luxury cars.” Gotcha.

Fisker is also planning an “electric for the masses” sedan called the Nina (yuck) to go into production in 2012. They DO have a production plant in place, and it will be employing people in my area who have lost their jobs due to all the automotive downsizing that’s been happening around here. Hopefully, many of my brother’s friends and co-workers who have been displaced.

The Nina is another mystery car, all I know about it is a sticker price of $47K. After federal tax credits, if they’re still being handed out in 2012, we’re talking $40K, right? And then gas savings over the life of the car. Not horrific.

So, in the spirit of “buying local” I’m going to spend my imaginary $109K that I didn’t spend on the Roadster on the Karma, and use the surplus monies to change the interior to something that doesn’t scream “I’d rather be golfing.”

And I’ll keep an eye on the Nina as a possibility for spending my real money on, when Jake turns 16 and inherits my minivan and I get to indulge my inner car whore. The greenest option, I believe, is to keep on driving what you’ve got until you can afford an ecologically sound replacement. Trust me, Jake will drive that minivan until he goes to college, and then Maverick will get it, and Mav is so tight with his money that he will drive it until it falls apart at the seams. And me? I started driving at age 25. I’ve always driven a mom-mobile. I look forward to owning something that I can feel a little guilty about.

I know that there’s a Chevy Volt in the works, too– from what I understand that car is being sold less on its sexy sexiness and more on its practical money-savingness and eco-friendliness. Which is sexy in its own way, but will be covered in its own blog post. Because I’ve decided that I find it entertaining to talk about cars, a subject I know absolutely nothing about.

In other news, Jeff wants to buy a late 70s model Corvette and my protestations are feeble at best. I sort of want one too.

I can’t help it. I like a sexy sexy car. I like long lean lines. We’re allowed to spend our funny money however we want. Thankfully, I’ve got this eco-thing happening to keep me in check. Ha. That, and a lack of real-life money.

What’s your dream car… what’s your “not out of the realm of possibility” car?