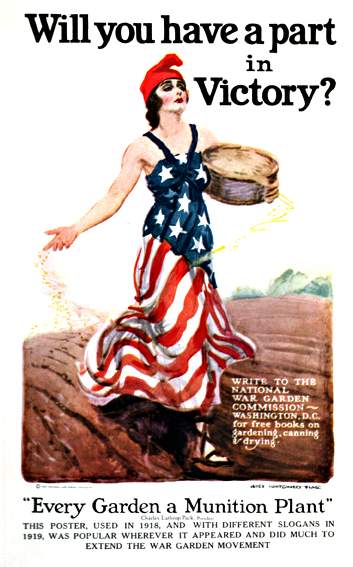 I am of the opinion that my life belongs to the whole community
and as long as I live,
it is my privilege to do for it whatever I can.

I want to be thoroughly used up when I die,
for the harder I work the more I live.

The boys and men of Europe marched to war in the summer of 1914. As a by-product of the fighting, fields of crops were crossed, slashed, burned, rendered useless. This set into motion a food production imbalance that proved catastrophic in 1916, as crops failed everywhere. Rations were set into place; all of Europe submitted to meatless days and dairy could only be had with a physician’s explicit prescription. Italians were allowed only nine pounds of sugar a year, and that only if sugar was to be had.

It was up to us here in the United States to feed the world’s starving and we rose to the challenge. In 1917 Charles Lathrop Pack organized the National War Garden Commission and brilliantly marketed the war garden campaign: selling the victory garden as an act of patriotism, of freedom, of independence and the American Way.

To waste food was to fail our troops and aid the enemy, it was as simple as that. 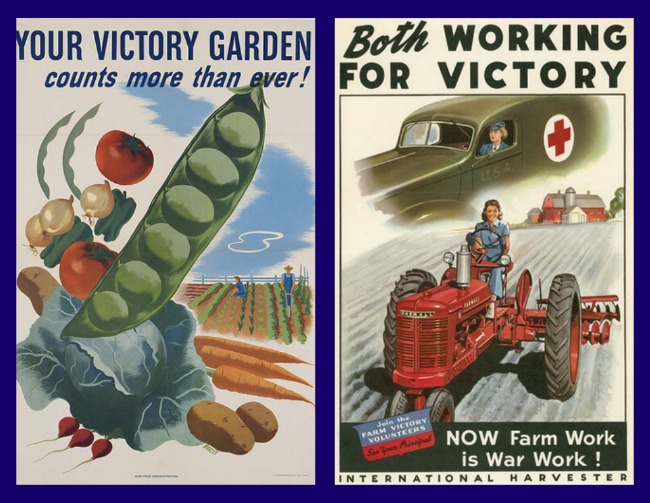 “…every one who creates or cultivates a garden helps and helps greatly, to solve the problem of the feeding of the nations – and that every housewife who practices strict economy puts herself in the ranks of those who serve the nation.  This is the time for America to correct her unpardonable fault of wastefulness and extravagance.

Let every man and every woman assume the duty of careful, provident use and expenditure as a public duty, as a dictate of patriotism which no one can now expect ever to be excused or forgiven for ignoring.”

-Woodrow Wilson, in a proclamation to the American people,
nine days after U.S. declaration of war

When all was said and done, according to U.S. Department of Agriculture estimates, the Greatest Generation planted more than 20 million victory gardens: producing up to 40% of the vegetable produce consumed nationally in their own backyards, conserving food and funds that could be diverted to our troops in the pursuit of victory.

Victory gardens have enjoyed a slight renaissance these past few years; First Lady Michelle Obama has emulated Eleanor Roosevelt in instituting a victory garden on White House grounds. Urban homesteaders and locavores cultivate gardens to free themselves from Big Ag and oil dependence.

Nationally gas prices are up 38% over last year. The average driver will wind up spending $1000 more on gasoline, forcing many to shift money from their grocery budget.

The uptick in gasoline prices hits us again in the form of increased food prices.

Globally, we waste over a billion tons of food a year, or a third of all food produced; $54 billion worth of food is thrown away annually in this country. 98% of that ends up in landfills, not compost piles, wasting more gasoline in transport and contributing to global warming.

Yet 68% of Americans are overweight or obese.

Meanwhile, in 2009 (and presumably more since then), 50.2 million Americans lived in food insecure households; about a third of those are children. 14% of Americans are on food stamps, an increase of more than 58% over 2007.

And healthcare costs per family have more than doubled over the past decade.

Do we really need to suffer a war-induced food crisis before we are compelled to step up?

As a generation that, for the most part, has lost its sense of civic duty, agricultural skills and connection to the earth and the seasons, would we be capable of answering that call if it were issued? Are we made of tougher stuff?

But I’m saying the need is already here, and many are fighting a great war at this moment. Just to feed their children decent food. 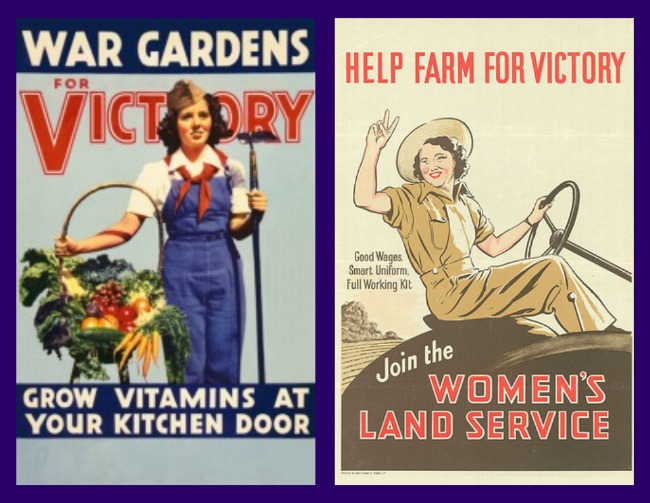 “Those who cultivated the soil could hardly do more than they were doing,” said Luther Burbank, a member of the National War Garden Commission, in speaking of the matter. “It was becoming evident that food, which before had been taken as a matter of course, was in reality the foundation of all life, all knowledge, all progress. What could be done? It became necessary to conserve carefully what already had been produced, and then produce more. Agriculture and horticulture had not generally been taught in the schools; the old hit-or-miss plan of farming was all too common’ the home garden was neglected and the school garden a novelty. To the call both to conservation and to increased production, the American people have responded nobly. How quickly they have changed their attitude, how splendidly they have made good by adapting themselves to the new conditions! When the war garden movement was started, the problem of food production was on the way to be solved.”

Be honest with yourself.
Are you part of the solution? Or the problem?

“Do Your Bit For America”, Woodrow Wilson proclamation 15 April 1917

The War Garden Victorious: its war time need and its economic value in peace, by Charles Lathrop Pack. This is available in its entirety online and hugely fascinating. I would have simply titled this post READ THIS with a link, if I thought people would actually do it.